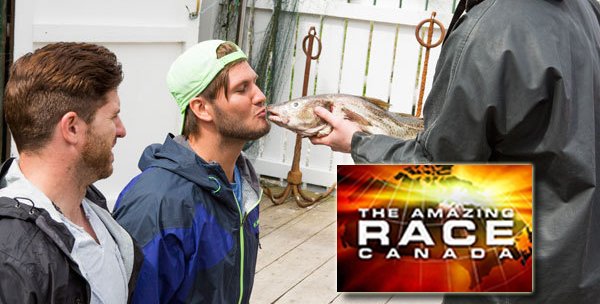 I want to tell ya a story about a friend of me fadder’s, old Alf Budgell, from over Cape Island way. He was jiggin’ fer codfish over at Dead Man’s Bay and all of a sudden he, um…wait. What happened next?

Okay, scratch that. I’m just after seein’ The Amazing Race: Canada, so let me tell ya a different story, about a pair of nice kind young fellers from over London way. They were all but guaranteed to win a race for a quarter of a million dollars, and then they got to Newfoundland, where no sooner did they get screeched in but the bottom fell outta ‘er. Eh b’y, even though they were by far the most entertaining team, they ended up being knocked out of the race on a leg where every task relied on being entertaining. Ah-MAZING! 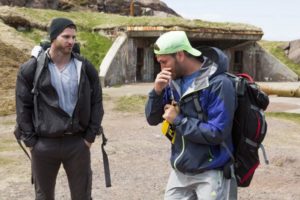 So how the hell did Jet and Dave end up at the wrong end of the biggest upset since Edmonton beat Detroit in the ’06 Stanley Cup playoffs? I had been saying for weeks that it was going to take a huge stumbling block or a seriously bad cab driver to knock the dudebros out of the finals. Turns out it was both. It was their cab driver’s fourth day on the job, the tasks tripped them up even further, and our beefy brotatoes fall victim to the old Fan Favorite Fourth Place curse that has afflicted such memorable teams as the Bowling Moms (season 5), the Twinnies (season 21), the Globetrotters (season 15), and Danny and Oswald (seasons 2 AND 11).

“My greatest fear is that I will fail at a roadblock that costs us everything,” Dave says. And, indeed, his fear was realized—on a Roadblock that Race rules forced him to perform, no less. I do not blame him a bit for being as upset as he was. (I feel for him. Pretty much the exact same thing happened to me on television once—the thing I most feared, and which was mostly out of my control, took me out of a game I should have won.)

Do I think Dave could have done anything at all differently on this Roadblock? Maybe. He started out the busking task with a sort of ironic posturing that I don’t think helped him gain fans. Unlike Celina (who could dance), Tim Senior (who could juggle), and Jody (who…well, we’ll get to that), he initially gave the impression that he was not committed to entertaining. If he’d thrown his rock-star persona wholly into the role, I think he might have drawn a better crowd and gotten through the task more quickly. After the fact, I learned that in the interest of not having to clear songs, the racers were given a list of public-domain songs they were allowed to sing and he didn’t know any of them except for “Row, Row, Row Your Boat.” That is indeed a tough handicap. But regardless of what he chose for his talent, I think he was held back by a fear of being earnest—it’s much easier to laugh it off when you fail at clowning around than it is to laugh it off when you’re actually trying and you fail. The snarky commentary that’s made their confessionals so awesome doesn’t quite translate to busking on the mean streets of St. John’s.

For the viewers, and sometimes also the racers, it can frequently be tough to gauge exactly how perfect something needs to be in order to pass a task, or what constitutes perfection, and two tasks on this leg illustrated that perfectly. (Jet, this is what I was trying to get at when I brought this up during my recap of the Regina leg, though I think you did rightly set me straight.) Though the Route Info at the kitchen party and the “Tell a Tale” detour relied on memorization and repetition, judges seemed nowhere near as picky about the Terry Fox quote as they seemed to be on the story. Are dreams possible, made, or made possible? Apparently they are all three. (Because somebody’s going to ask and/or try to set me straight here: the Terry Fox Foundation says the quote is “made possible,” but on the monument, it says “made.”) But until old Alfie wrapped the baby boy snug in his jacket, Jet and Dave apparently weren’t telling the Detour story correctly. Vanessa and Celina didn’t seem to be telling the story word for word either, but they evidently hit the high points in a way that Jet and Dave did not. Or maybe the judges were bored and ready to go inside. Who knows?

It’s long been a rule on The Amazing Race that if you have a choice between a task that relies on an animal and a task that relies on your own wits, pick your own wits every time, lest you face a flock of truculent waterfowl, a broken ox, or a camel that tries to trample you. And then, every so often, a glaring exception appears. “Wag the Tail” was clearly a better choice than “Tell the Tale” this week, plus, it was the cutest animal task since the bunny steeplechase of TAR:US Season 19. Not only were the Newfoundland dogs adorable, they were mostly agreeable and smart, and neither the Mitics nor the Hagues had much trouble getting their pooches to participate. In fact, the Tims’ dog chose them, rather than the other way around. That’s how ready she was to help them complete the task.

But after the relatively sweet interlude with cute dogs, the Race brought out the sort of task I hate and fear most out of all tasks: the “get the locals to give you money” task. First of all—and I’m sure this is not a problem for most of the racers, since you have to be relatively extroverted to get on the show in the first place—getting up in front of people and being persuasive is, to me, more terrifying than jumping off of a building or eating larvae. But that’s just a matter of personal taste. What I find more globally problematic is the cultural implications of a begging task.

In races that go around the world, begging tasks sometimes happen in countries where giving away even a small amount of money is going to be a bigger deal than it is here. I was relieved when non-elimination legs stopped involving giving up all your money, but that hasn’t stopped the Race from occasionally staging a street performance, salesmanship, or other task incumbent on raising money, and it’s not always in an area where locals necessarily have a lot to give away. Essentially, for the entertainment of a bunch of people in the first world, the Race often asks people with much less to give up what they have, and that is really icky to me.

Granted, this is less of a problem along a corridor of buskers in a big city in relatively prosperous Canada, but it doesn’t completely absolve the task of its ugliness. When a woman who was actually seeking money for food donated to Jody’s cause of “win a televised race for a quarter of a million dollars” because she believes in paying it forward, that had to be humbling. See, right there, that’s why I hate these tasks. I hope the show made it up to her somehow.

This task also put Jody in the mildly awkward position of using his war story to get donations. In the absence of singing and dancing skills, he gets points for finding the one talent he could share with the locals—his storytelling skills, and his remarkable story—but again, when he didn’t strictly need the money, I don’t quite know how I feel about it. With all the cameras around, though, people definitely know he’s doing this for a game show, not because it will alleviate any alleged suffering on his part, and it’s their choice to help him out. I’ve heard from racers that bystanders give racers money all the time, even when it’s not part of the task, just because they’re fans of the show and they know funds are limited. So I think I can give him a pass here.

The particular controversies of using it for begging aside, Jody’s tale remains undeniably inspirational, and for most of the race he has not used his tragedy as a crutch—to the contrary, it’s rarely even come up. More often than not, he has not just kept pace with his two-legged competitors, he’s actually smoked the competition. Terry Fox would be proud.

This marks the first time on ANY edition of the Amazing Race (we’re not counting the Family Edition here…or ever…) that all of the final three teams consist of family members. (Believe me, I checked all of them and in the process spoiled myself for at least six international seasons I haven’t seen yet. This is how much I love you all.) I’m absolutely pulling for Jody and Cory now that Jet and Dave are out (and not just because they were my preseason cynical pick to win).

But really, the Tims have a great story and a great bond, and Vanessa and Celina are more tenacious—and better racers—than they get credit for. There’s no team whose victory would leave a bad taste in my mouth. In 22 U.S. seasons, I think this has been true for me maybe once. I rarely even like two of the top three. Sometimes I don’t really like anybody. But honestly, there were very few teams in the entire Canadian cast whose victory would feel like a disappointment. They’ve all been great. Some are better racers than others, and some have been luckier than others (particularly the team who’s escaped last place twice!), but nobody has exactly coasted to the end here. One thing is for certain, though: with Jet and Dave out, no matter who the winner is, it’ll be a big surprise.