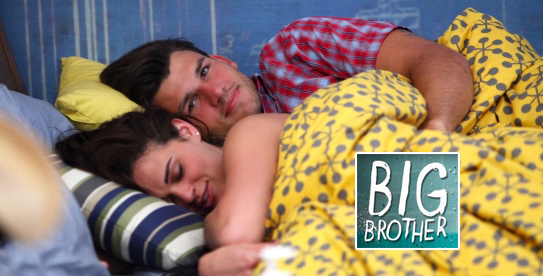 This blog entry begins with Darth Vader’s “Imperial March” played as Aaryn, Jeremy and Kaitlin assume control of the HOH room. This is what makes Big Brother great: Every week is the same and every week is so different, depending on who wins HOH. The house vibe house changes, as do the fate and destiny of every single player. Each houseguest’s destiny can be altered for the rest of the season by something as simple as randomly being partnered in a comp where he or she has to walk on a Slip N Slide to fill up a big jar with barbeque sauce.

Side note: If you could pick any past or present athlete to compete with you on this specific comp, who would you pick? I think I would choose Rudy (from Notre Dame), as you need to be short and quick, have good balance, and have a big heart and never give up. The BB gods have determined that Aaryn gets to be HOH, which brings us back to where this blog started. 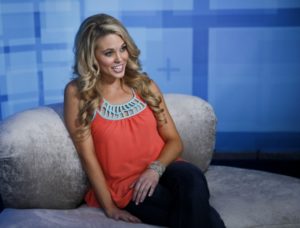 Can this HOH make a big move?[/caption]

Aaryn may be HOH, but her ability to make a big move isn’t in her hands. Smarter players in the house already are four or five moves ahead of her. At this point, the house is starting to take form.

Again, let’s break everyone down:

• Aaryn: She retells the classic BB tale of playing with your heart—no matter how small it is—instead of your head.. Aaryn has the temper of Sonny Corleone.  When she won HOH and demanded to know who voted for David by a show of hands was high comedy. I think a big part of her, has the goal to get Elissa out not only for her Count of Monte Cristo revenge rage but also because she thinks with Elissa out that she will then assume the weekly MVP award because in her mind she is Americas sweetheart….awkward as CBS finally showed what people in the know have known for the past two weeks, which is Aaryn is what some people might call “racist” or “intolerant”.

• Speaking of Elissa, the other houseguests are treating her like she’s a weapon or force, but not a person. When the other houseguests talk about her, its like they’re talking about the Fifth Element or something, like they need to get control of “It” to decode who goes home. If Elissa survives this week, she may really turn into a power. She is going to get this MVP abomination every week, and she will join forces with the Helen/Andy side of the house. She needs to survive her nomination this week, if she does this weapon of mass destruction may get unleashed.

• Jeremy: If Frank was the Terminator last season, then Jeremy may be the T-1000. It doesn’t help him that he looks identical to Kindergarten Cop bad guy :
Also, he has the ability to win any comp thrown at him. Moving forward he is the big bad wolf in the house and being able to take him out will be the focus of the non-moving company members of the house. Once the attempt on his BB life is made and he’s nominated past the veto comp, the moving company will be hard pressed to not show their cards to save him.

• Helen: I’ve been hard on Helen, but she has awakened and finally is playing the game. Maybe she knew that she was smarter then everybody in the house and decided to spot them a week in the game before starting. Any way you slice it, she clearly has a grasp on the house dynamics. She is up for eviction but appears to be the pawn as of now. Pawns go home in BB but she has shown some guile this week. Her side of the house is lacking the clear leader or solidarity of the Moving Company so Helen needs to form her “wolf pack” quickly.

• Spencer: There is something about the look in his eye that screams, “It places the lotion on the skin. it does this or it gets the house again.” Granted, in real life he may donate his time to charity; then again, John Wayne Gacy dressed up as a clown and visited kids in the hospital. In this game, he is focused and determined, but it does seem like the smarter houseguests (Helen, Andy) are starting to see through him—specifically, being able to tell that he is playing both sides. Side note: Does Adam from BB 13 bang his head on the wall every second he watches Spencer this season, muttering under his breath like Jack from Lost, “That should have been me! It should have been me! I have to go back!”

• Nick: This is the name that is getting thrown around a little bit as a possible nominee. I think it’s because he comes off like a Sprint cell phone salesman that you walk buy at the mall, who dives headfirst into the conversation as your walking by hoping not to make eye contact. Jeremy is The Moving Company member most hated by the house, but Nick is the member most likely to get voted out of the house first, unless he can shadily join forces with non-Moving Company members of the house.

* Howard: is in a good spot. Not on anybody’s radar. He’s part of a firm/strong alliance. He doesn’t ruffle any feathers and has a good bedside manner with the weaker players in the game.

* Amanda/McCrae: America’s forbidden love. It’s like Jesse Spano and Screech finally hooked up. These two have defied the odds so far and appear to be shomancing this thing to the bitter end. Amanda’s mouth could be her downfall, though. She was an Alpha powerhouse the first week, but that was a mirage and she is not in a great spot. Meanwhile, one might think McCrae you would think will be able to help her if her life is ever in peril but he seems to have the courage of Upham in Saving Private Ryan (i.e., no courage). Amanda or someone needs to slap him in the face and tell him to be a man! Yes, he is in a good spot now, but only because he is so easy to control and he is so afraid of confrontation.

*Judd/Andy: I put these two together because I feel like they should join forces. I get more and more impressed with Judd the more I see him, as it’s clear that he knows what he’s doing. The danger for Judd and Andy is that they are not protected by a strong alliance, which can kill you early on in this game. If they can join forces with Helen, Elissa, and the corpse formally known as Jessie, they may have something here to rival The Moving Company.

• Candice: Annoying. She’s doing that thing where she thinks she is smarter than she really is and just making a mess of things. I don’t like what I’ve seen from her. She’s like Andrea from 90210: Yes, she’s smart and probably makes some good points here and there, but her approach and reasoning just pisses everybody off. Go back to writing about the West Beverly football team steroid scandal! She brings up the point that the guy’s maybe working together which always shines a light that women are unable to ever come together in Big Brother in any real way. I mean didn’t they have to read “Herland” like the rest of us in Mr. Logan’s English class in which I couldn’t find cliff notes for and the internet didn’t really exist back in 98 so I actually had to read the whole book through. I digress.

• Kaitlin: Locking into the shomance with Jeremy may be her saving grace this week, as nobody better mess with Jeremy’s girl. She’s practically wearing Jeremy’s letterman jacket. I don’t know where her game will go if—God forbid—anything happens to Jeremy, but my guess she will be picked off in the next two weeks or will be carried to the final show and arguing for second place.

• Jessie: From what the watchers from the livefeeds say, she is Bernie from Weekend at Bernie’s, only if Bernie, instead of being dead, were in a coma and would sporadically come out of the coma to have emotional outburst, then immediately slip back into the coma. So, basically she is a strong candidate with Kaitlin to be dragged to the end of the game.

• Ginamaria: Her accent makes her sound like Adriana from The Sopranos and her fate may be the same (spoiler alert). She should just change her name to “Pawn.”