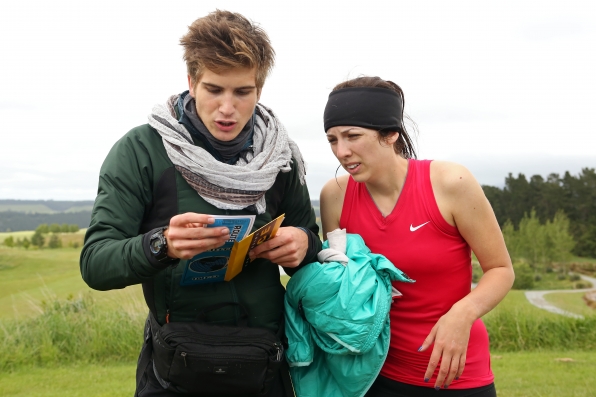 This week, teams headed to Phil’s hometown of Christchurch, New Zealand, where Phil wasted an opportunity and did not design the tasks around cleaning out his parents’ rain gutters or doing their laundry. Instead, teams drove junky cars around a set of traffic cones and ran a chicken-themed obstacle course.

Of course, the biggest story this week is Dave and Connor’s. We’ve seen many racers running out the race on sprained ankles, messed-up knees, gaping head wounds, and all manner of foot injuries—and if TARcon anecdotes are to be believed, for every one we saw onscreen there were two we didn’t see because the racers didn’t want to tell anybody and risk being medically removed.

It’s incredible to realize that with all of the teams who’ve threatened to quit, and all of the teams who’ve functionally quit by dropping out of tasks (I’m looking at you, Idries and Jamil), only one team has ever officially quit the Amazing Race. (For the curious, the quitting team was Marshall and Lance in season 5, who cited bad knees.) No team has ever actually been medically removed, and this is the first time in many seasons that a team has even contemplated dropping out because of physical injury.

As I predicted last week, Dave’s injury made John and Jessica’s Express Pass decision a no-brainer. Where they were previously weighing the pros and cons of giving the pass to the team to whom they’d promised it versus giving the pass to a weaker team who might be out early, suddenly David and Connor fit both of those descriptions. And while the Express Pass ended up giving the O’Learys a leg up on the competition for now, the race is not exactly crutches-friendly. As I’ve pointed out before, you don’t get the million dollars for winning every leg of the race, you get it for winning just one (plus managing not to totally bomb the others). Let Dave and Connor enjoy their first-place finish. On balance, this was still the correct strategic play.

Even though Max and Katie were the team touted as the evil ones, they haven’t done more than a little mild bickering. I submit that the true evil lies with the team we all thought would be the anti Max and Katie: John and Jessica. They spent an inordinate amount of time this week explaining their alliance, checking in with their alliance, and deliberating about the alliance. For something that’s super-secret, they sure do seem to talk about it a lot. if they were playing Survivor, and this were Stephen Fishbach’s column, he’d probably give them a FIshy. But this isn’t Survivor, and I have no Fishies to give. This level of scheming and alliance-making has occasionally worked to a team’s benefit, but more often than not it’s just a distraction. Ultimately, the strategic Race is a game you don’t have to play. Just race hard, navigate well, and don’t piss anybody off, and you’ll go much further than you ever could by trying to be some kind of master strategist. In the middle of a two-part superleg, every bit of extra mental energy helps. If they don’t figure out what show they’re really on, their preoccupation with being reality masterminds could spell their downfall.

Who’s doggedly pursuing victory? Really, if I don’t once again call out David and Connor’s perseverance here, I’m a jerk, aren’t I? That man moves faster on crutches than some of the other racers do with two good legs. I have no illusions that they’ll end up winning, but the fact that they want to keep going and are willing to figure out how to make that happen should be a big wake-up call to anybody who’s ever openly discussed dropping out of the Race. Part of me hopes they DO keep going all the way to the end, although part of me just wants Dave to put his foot up and get some rest.

Who’s being left in the dust? If Rule #1 of Amazing Race preparation is “learn how to swim before you go,” Rule #2 is most assuredly “learn how to drive a stick shift before you go.” But just as paddling around a pool at the Y a few times might not be enough water preparation, a few days of driving lessons might not be enough road preparation. And this task drove the point home that you can’t get away with letting just one team member do all the learning, either. Even though they’d all heeded the warnings and taken the lessons before leaving for the race, Winnie and Pam, Jen and Caroline, and Max and Katie all ended up adding a few extra spins around the race course to their day because they still hadn’t completely mastered the art.

Bates and Anthony also made a big error in judgment when they chose to follow Max and Katie to the Roadblock instead of double-checking their own directions. As a result, both teams got lost and dropped to the back of the pack together.

But the biggest race blunder this week was Chuck and Wynona’s, as they took the first flight they could find rather than doing the cursory research that might have shown them some earlier options. In the end, it didn’t end up mattering all that much since everyone’s arrival time was in the middle of the night anyway, but arriving two hours late when teams were arriving in the middle of the day could have knocked them out of the race entirely. While this particular mistake had no net effect on their race performance, we’ve seen in previous seasons that a lack of airport savvy is often an indicator that future race prospects aren’t good. Yes, I’m still quite fond of them (how can you not love a team who’s having this much fun?) but I’m not optimistic.