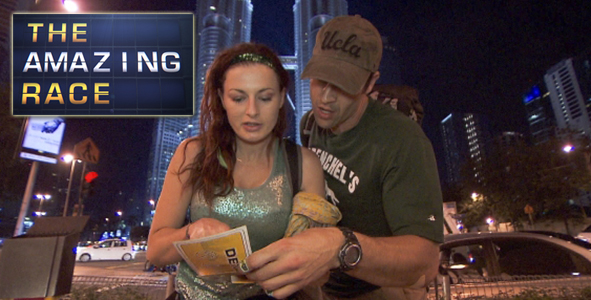 One uncomfortable truth about this season of The Amazing Race just can’t be ignored any longer: they are cutting corners in a big way. Apparently the money Casting saved by not having to go out and find 22 new racers for this season was only the beginning. Four episodes in, and we’ve been to just two countries. Instead of heading to a travel agency to try and find the best flight, teams must proceed to the “marked ticket counter” to choose one of three prebooked flights on the same airline. Two of three Detours have presented both options within sight of each other. Each leg takes just a few hours to complete. And those are just the most obvious signs. Almost everything this season is pointing to serious tightening of the red-and-yellow belts, and CBS is looking to the huge personalities they’ve cast to fill the void left by not splashing out on spectacular locations and elaborate tasks.

One reason reality shows have been so enduring at CBS is because they are almost always cheaper to make than scripted shows. It’s not quite as cheap as Survivor, of course, but even with all those plane tickets and location fees, The Amazing Race has still been a relative bargain for the network. So it is not a good sign to see this program’s budget slashed so obviously.

I hope it’s not a sign of things to come. By this time next year we could find CBS filming the entire thing in three days, entirely within the greater Los Angeles area. “Make your way to that soundstage over there,” the clue will say. “Some star of one of our other shows who has nothing better to do will hand you your next clue, which will instruct you to proceed to the Pit Stop at that other soundstage. Make sure you pretend to be excited to meet the ‘star.'” Cross-promotional synergy!

I have to be fair, though – despite the shoestring budget, some shades of the old TAR we know and love were definitely evident in this leg. Certainly episode 4’s tasks are a step in the right direction. A potentially physically grueling Roadblock barely five minutes into the leg was a fantastic start, followed by mid-leg travel to disorient, followed by a Detour involving two tasks that forced every racer to redouble their focus and actually learn something. There was not a single racer out there who could coast by on raw talent or physicality this time around. Focus and a clear head were rewarded. Put another way, if you tried your smartest, it paid off.

Unfortunately, a clear head did not prevail for Margie and Luke this leg. Every time Luke has run this race, he has done great until …he hasn’t. In every one of Luke’s three Amazing Races, he’s hit a daunting task and it’s just unraveled him. In Season 14, it didn’t materialize until the final leg’s final Roadblock. In Season 18, we can’t forget the infamous tea task (and just in case you did, last night’s episode was sure to flash back to it).

However, we’ve never had the chance to see how Luke recovers from such a thing. Every time he’s come unglued before, it’s led directly to elimination. This time, Margie and Luke got a reprieve. Will the tension build or can he bounce back? This is uncharted territory and I, for one, want to see if Luke starts the next leg stronger than ever having gotten it all out of his system, or if this is just the small storm before the hurricane. (Is that a thing? I feel like that might not be a thing. But you know what I mean.)

Even with Rachel’s newfound inner zen, I was a little surprised Rachel wasn’t joining Luke for his tantrum. The drink-pouring looked harder than head-shaving and salami-tasting combined, and certainly both Brendon AND Rachel were a little upset by it. It was insult to injury when they helped talk Luke down from the ledge, only to have Margie and Luke beat them to the mat. From a game standpoint, that is not the smartest thing they’ve ever done, but on the other hand I’m not totally sure how much difference they made, especially since it seemed like only one person at a time could pour drinks. One thing is for certain, though – the Brenchels are either rapidly maturing as they prepare to start a family, or they are getting one hell of a heroic edit. Maybe a little of both. We’ll see.

Between the sheer exuberance of the Afghanimals and Globetrotters, Caroline and Jen’s matter-of-fact competence, the Cowboys’ and Team Cancer’s powerhousing, and John and Jessica’s newfound laid-back attitude, almost everyone else is keeping things positive in the best ways they know how. Cord hit a snag early on when he had to try the trampoline a few times, but even though he was slow to grasp the technique, he and Jet laughed it off and it had no net effect on the race. And while I’m trying to forget the camera’s loving closeups of Jessica’s blistered and bleeding feet, there’s no denying she was a total rock star to go right back out there and finish the Roadblock. While I know Racers are out there with many more injuries than we ever hear about, Jess never complained about her feet again for the rest of the leg. She just joined the party and powered through.

One thing I have to say for this crowd – almost everyone’s having fun. They didn’t need to have a party Detour – the party would have been wherever they were. Their fun is infectious right now, but I seriously hope there’s some more feuding up ahead or it’s going to be one long, boring, love-filled season.

But since meltdowns are the lead story of the day, I’ll conclude this week’s blog with:

As always, a totally subjective and by no means authoritative or comprehensive list. I’m sure other meltdowns were nearly as good or even AS good as these.

6. Pretty Much Everyone, Amazing Race 6, Episode 8 – I’ve said it before probably too many times, but this episode is and probably always will be my favorite episode of The Amazing Race ever. The Hungarian soup Roadblock is notable for a rare instance of Jonathan Baker freaking out on behalf of his wife instead of ather (well, then at her some more after that), but there was not a single racer who got through the task without at least being mildly perturbed by it. Everyone’s Roadblock partner tried to be helpful and encouraging as the Roadblockers tried to down three cups of insanely spicy soup. Almost all of them got their heads bitten off.

5. Rob and Kimberly, Amazing Race 10, Episode 12 – In the penultimate episode of Amazing Race 10, one Detour option invited racers to search a giant pile of tomatoes for their clue while Barcelona locals threw tomatoes at them. Kimberly, who seemed to be on edge from day one, did NOT like the tomato-pelting aspect of it. Five minutes in, she began shrieking, and Rob began shrieking back. Awkward as the fight was, something about the fact that they continued to be pelted by tomatoes throughout the argument added an element of pathetic comedy to the incident.

4. Rachel (of Brenchel), Amazing Race 20, Episode 4 – Perhaps the most iconic quote of latter-day TAR came from Rachel while trying to identify salamis in Torino, Italy: “The Amazing Race is supposed to be fun and good!” This meltdown is notable for the fact that it happened relatively early in the season. Would you have guessed they’d make the final leg? Probably about as much as you’d have guessed Flo would.

3. Flo, Amazing Race 3, Episode 12 – What is it about the penultimate leg that brings out the very worst in people? Okay, the penultimate leg really wasn’t Flo’s primary problem, given that it was not the first time she threatened to quit the race. After switching tasks between Basket Boats and Basket Bikes about 35 times, they finally finished a Detour by getting a local to row Flo across the river while she sobbed the entire way.

2. Mika, Amazing Race 15, Episode 6 – Because the Globetrotters are back this season, this task, with their attendant trash-talking, has come up more than once on the podcast. Country singer Mika’s waterslide-inspired freakout ranks high here because there’s one glaring difference that sets it apart from the others: namely, after all these other meltdowns happened, each contestant straightened up, got it together, and finished. Mika’s dual fears of heights and water were just too much to overcome, and they ended up taking the stairs down to their elimination.

1. Colin, Amazing Race 5, Episode 12 – Yet another classic meltdown that happened practically within view of the finish line. When super-intense Colin ran into trouble leading an ox with a plow, his outburst of “my ox is broken! This is BULLSHIT!” became perhaps the most iconic moment in Amazing Race history.