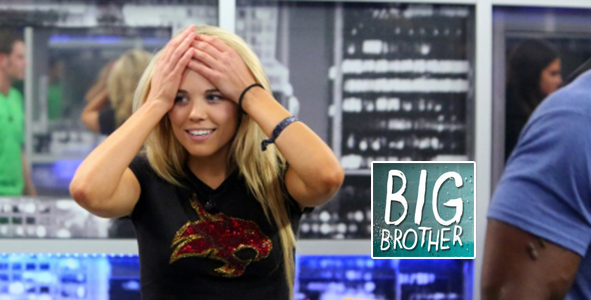 I have never been much of a math oriented guy, but I will say that quantifying the screen time of the recent nomination episode has aided in my qualifying it. When considering the intentions of Big Brother Editors and Producers last week, I looked at a simple count of the talking heads and the intimate scenes each houseguest was in during the episode. While analyzing the form and structure of a Big Bro episode, as I have for this installment, I went a step further. Not only have the appearances of houseguests been tallied, but I have added up the total amount of time each player was individually given during last nights show. To boot, the context of the talking head is also designated one of four possible entry types: recap, self-assess, gaming, and reactionary.

No diary room for Kaitlyn.[/caption]

Diary room entries that involve recapping usually take place at the top of an episode to get less avid watchers caught up with the rest of us. Out of the 70 total diary room entries during the 42 minute episode, only 4 of these were recaps. Aaryn the HOH, the wiley Nick and the deer-in-headlights known as Jessie were the few house guests lucky enough to remind us of the doings in elder episodes. You’d think in an episode like Sunday’s, where Kaitlin is the only contestant not given a single diary room slot, she might have been thrown a bone by production. Yet, Nick and Jessie’s expository presence as recappers at the beginning of the show, structurally foreshadows, or narratively greases the wheels for their unrequited love scenes later in the show. While it could have implications on the game in the future, getting a little more Jessie and Nick time at the start, makes the non-gaming scenes involving Jessie’s pathetic horn-dogging a little more relevant.

The second kind of diary room entry that Big Brother culls from its players is the self-assessor. There were 14 diary room entries that dealt with some sort of self-reflection. These types of entries tend to be more self-deprecatory, but can also pop up in the form of the noxious boasting demonstrated by Jeremy.  In terms, of which characters have the best chance at earning MVP, look to the players that are most open about where they see their place in the game being. These are the players that are building the strongest imaginary relationships with audiences because they are demonstrating an intimacy that the other forms of diary room entries do not. Significantly, 4 out of 9 of Elissa’s talking heads were self-consciously looking at her place in the game. Her being targeted has forced an emphasis on her insecurities, exacerbating her chances of building rapport with audiences. While not especially entertaining, Elissa has managed to come off endearing, which is central to owning the MVP spot.

Strategy and game talk account for 38% of the all diary room confessionals. Out of the 27 talking heads that dealt with a player’s gaming intentions, Helen and Spencer top the list as those statistically playing the hardest right now. Coming in close is Andy and Jeremy, but the implications of Helen and Spencer’s game have more to do with the central narrative at the moment. Helen’s game, in associating with Elissa, forced her to work overtime when she wound up on the wrong side of the house again. To her credit, her discussion with Candice began to chip away at the reality of the Moving Co., but even more pertinent was Helen’s going out on a limb with Aaryn during a one-on-one. This willingness to play a more insidious game with players lacking integrity truly demonstrates her tenacity as a houseguest. While it didn’t ultimately work for her in the long run in this episode, she did end up tying Elissa for the second most talking heads Sunday night. They both had 9 entries, and Helen logged an entire minute and twenty seven seconds to herself. Aaryn and Elissa are the only two to clock more time than Helen, but with Elissa potentially gone and Aaryn out of the HOH, Helen really has a shot at it. If America falls in love with whom they shown the most, Helen is sitting pretty after this weekend.

Also, there was noticeably no game talk from some. McCrae went this entire episode without really playing the game in any empirical way. Howard, Amanda and Candice weren’t really shown strategizing either. Granted, Candice was discussing potential alliances already existent, but that doesn’t speak to her active engagement in the game. Instead, this type of entry, dealing with the dynamics and impressions in the house falls under the final category: reactions.

Diary rooms that show a players reaction to an event, something that was said or another player, are often some of the most entertaining ones on the show. Nick mocking Aaryn’s tyranny after winning HOH is a great example of a comedic reaction. Reactions, like self-assessing confessionals, bring us to a different kind of understanding of the players. In a lot of cases, these are the kind of entries that make or break characters for the audience. While Spencer has almost a minute to himself on this last episode, all five of his entries involve his gaming. I can’t say I like Spencer the same way I do Nick, and all derogatory comments aside, my affinity toward Nick directly correlates to the quality of time, the kind of diary entries, I get from him compared to Spencer.

On the flipside of the reactionary coin is Aaryn. She gets a lot of reaction spots. Half of her entries are her reacting to others, and as the show pointed out in this episode, they are vile and unsympathetic. It speaks to Aaryn’s character that out of her 10 talking heads, 2 were recap, 1 self-assess, 2 gaming and the rest reactions. Her superficiality and selfishness can’t help but bubble to the surface, when prompted by the Diary Room to be honest. She only sees what is on the surface of things and it shows in what she chooses to share in the D.R. If these reactions were, indeed, convert gameplay, and not her honest reactions, it still wouldn’t be acceptable. As her televised representation in the main show portrays, there is nothing sly or ironic about her. Aaryn elicits a reaction from audiences because all she does is thoughtlessly react herself.

For the most part, a diary room entry is embedded within scenes that the players are alluding to in some way or another. During the HOH competition, for example, the diary room entries that are intercut have the players rehashing their inner thoughts and emotions during the game. Often players speak in the present tense, though they are recollecting a situation, making it sometimes seem as though they are watching themselves in real time. Finding the right time to use these monologues is part of the appeal and underappreciated complexity of a competition reality show. It wasn’t until completely disassembling this episode that I fully saw the skeleton of a good nominations episode. 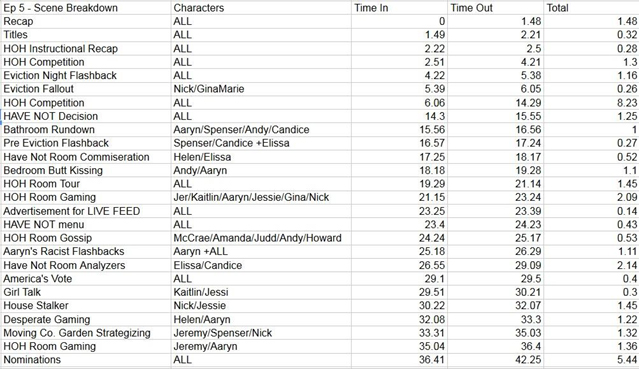 This table reports the scene breakdown of episode 5 of Big Brother. Within these scenes the character-centric diary room entries are supplanted, but here lies the true heart of our plot. To really get a handle of how the plot is structured in this episode, it is useful to remember the elements of plot: exposition, inciting incident, rising action, climax, falling action, and resolution. 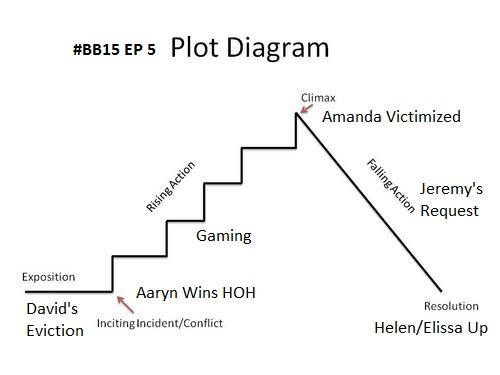 The exposition in this episode lasts all the way to the six minute mark. We are dealt the sad tale of Aaryn and David’s thwarted romance. Confusion over votes sets up a paranoid atmosphere, atop Aaryn’s heightened blood lust.

The rising action delivers the real tension and sense of urgency we tune into Big Brother for. Following Aaryn’s inciting win, her calling out people for evicting David is a primo example of adding pressure to the plot. This need to discover the truth behind the votes leads to us to discover Candice has been framed by Spencer and that Nick is under the microscope for potentially being a traitor. Aaryn’s HOH also seemed to cement Elissa, Helen and Candice as needing to communicate with each other more openly in the future. The point of the rising action that really starts to show what kind of hell these players are going through is when Helen stoops to work with Aaryn. But Helen’s seeming ruthlessness was only the preface to the real juicy bit:

The climax is the point in a story that things change. The oh-shit moment in any story is usually the climax. In the case of episode 5, Amanda being targeted marks the real climax of this episode because it signals the demise of a unified front. As part of The Moving Co., Spencer and Nick should not have been targeting their fellow ally McCrae’s girl were the story of the Moving Co. to go off without a hitch. Their willingness to compromise the comfort and security of McCrae in the house has the most implications on the game as a whole. As the most profound development and twist of the show, not to mention it’s chronological placement matching that of most tradition plot models, suggests its supremacy as a plot point.

Finally, while we won’t have the sense of resolution we might hope for until September’s finale. The resolution of this episode is most assuredly the nominations. Not just that there were nominations, but that Aaryn did not abide the instruction of Jeremy. Aaryn, though privy to the climatic slander of Amanda, still played her own game. Setting herself apart, apparently she is resolved to take out any female figure in a position to judge her.

While this episodes structural integrity might be somewhat sussed out now, the overall season arc has yet to be fully envisioned. Imagine the possibilities!

Until next time, thanks for parasocializing.