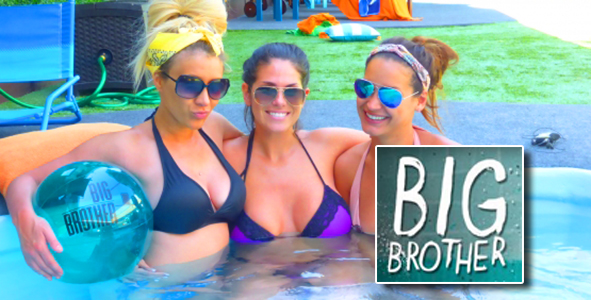 After flexing our brain muscles for the past 5 weeks, we are going to have a little fun with our parasocial pals in the #BB15 house.

Coming up we have: Future Fight Preenactments, the DR of the day, Big Bro Breeders, the Cringiest Clip, Parasocial Prescriptions, Tweetjects, and finally, Big Brother: Special Guest Edition plays out at the end of the show with extra special guest, Poppy Montgomery.

But first: Can you smell the head-butts and throats-slits soon to come this season? What is a season of Big Brother without a little brawling? Based on what we have seen so far, here are the likeliest physical altercations we can count on seeing in the house:

Fight 1: Aaryn V Elissa: Aaryn slings Elissa a stank look, propelling Elissa into a mad fury. She rushes over to Aaryn, but thinks twice about showing aggression in the house. But it is too late! She has awoken Aaryn’s inner beast and the two crash into each other. Elissa pops an implant, they struggle and sort of teeter back and forth for a bit before Aaryn tries to give Elissa her signature spin-smack. Elissa limberness as a yoga instructor enables her to avoid the maneuver and she counters with a crotch-kick, sending Aaryn straight to the medic.

Fight 2: Amanda V. Spencer and Howard: Sick of Amanda dominating the house, Spencer and Howard team up to kick Amanda’s ass. They wrestle a little bit and try out some new moves on each other, but eventually Amanda claws out their eyes. Grows four times her normal size and then, in proper man-eating form, feasts on her feisty male competitors.

Fight 3: Candice V. the Girls: Candice is minding her own business, when GinaMarie and Aaryn come up and start harassing her for liking her bed horizontal. Helen and Elissa get in on it, knowing Candice is a huge threat to win the game, if she makes it too far. Candice is forced to hide under her bed, when the ghost of Howard returns to give the girls a real fright. They quickly scurry away, Elissa and Helen tripping over one another.

DR of the Day

By George, those were some exciting imaginary conflicts, if I do say so myself. Next up we are going to take a break from all the violence and get our zen on with the best talking head of the episode: Elissa Needs her Yoga.

We have seen the future offspring of Houseguests mused upon in competitions in the past, however, there has never been an explicit mash-up of guests that might actually breed in real life. So, let us take a look at some of the couples in the current house, and what their babies might end up looking like.

Our first couple: Amanda and McCrae, were they bold enough, could spawn Lil McRanda, whom will have the smug lips of Amanda and stoner eyes of McCrae. Amanda will refuse to breast feed young McRanda, noting the sensitivity of her newly augmented chestal units, and McCrae will be proud his free pizza privileges will keep his baby fed. Amanda will insist the baby gets earrings immediately.

Our second couple:  Howard and Candice, upon sexing, will bring forth the adorable Canward into the world. Baby Canward has the curious ears of his father Howard and the uneven hairline of his beloved mother Candice. Young Canward will grow to resent his parents handling of the racism they faced in Big Brother house.

Our final baby making houseguests: Jessie and Judd. Together they are able to pop out the light-hearted, but mentally-challenged Jedsie. Jedsie’s lazy eye and slurred speech may hold her back in life, but to her parents, she is just perfect.

The cringiest clip of the week goes to Aaryn and her pronunciation lesson.

Okay, the next segment is called Parasocial Prescriptions because we get to give the houseguests the right medication for what ails them. Hell, we know what it best for these players better than they do.

First up, GinaMarie will be given Zoloft to help her deal with the depression and anxiety she has experienced since her beloved Nick has gone. This diagnosis is supported by statements like, “I miss my Nicky Baby! You think he is sexing up some scrub in the real world?”

Then we would have to give a big old bottle of Lithium to Aaryn to help her deal with the bi-polar tendencies that have emerged in the house. Clearly, she is the most in need this mood-stabilizer.

Amanda will be given estrogen supplements to combat the masculinity that oozes from her being. Her nip hairs may keep her warm at night, but they aren’t doing anything for her feminine wile. Conversely, McCrae should be prescribed testosterone so that he might actually grow the balls to stand up to Amanda every once in a while.

Finally, Jessie should be prescribed that fictional drug in Limitless that makes people way smarter because she is just about as dim as it gets for a housemate.

Next up, we examine the tweets of evicted housemates to see whom they are rooting for now that they are out of the house. First one out this season, David Girton, recently wrote about his ex-housemate GinaMarie comparing her laugh to that of a hyena’s yipping and yapping. The esteemed Nick Uhas lends his support to Howard, insisting he is both loyal and physical behemoth. Finally, the last person evicted, Kaitlin, diverts her attention from the Big Brother house to let the world know she is chewing gum that is embedded with sand. She is as fascinating outside of the house as she was in it.

Most every season, there a special guests on the show that host either luxury competitions or Have Not challenges. In past seasons, we have seen the likes of Will Ferrell, Mark Wahlberg, Neil Patrick Harris, Jeremy Piven and Tori Spelling. And this season, the house was lucky enough to have Poppy Montgomery MC the challenge. In light of this amazing cameo, it seemed appropriate to consider a version of Big Brother where only the special guests played. So, let us watch Big Brother: Special Guest Edition unfold, and pick up with it from the final five, following Jeremy Piven’s expulsion from the house, where Neil Patrick Harris is HOH and has put fellow, former BB special guests, Will Ferrell and Tori Spelling on the block.

In the privacy of the diary room, Mark Wahlberg gives his vote to evict: “Hey Julie, sweety, I vote to evict my The Other Guys co-star, Will Ferrell, because he is funnier than I am, and that really pisses me off.” Poppy Montgomery enters the DR, and also votes to evict Will, after reminding us who she is again.

With a vote of 2-0, Will Ferrell is evicted from the house. Needless to say, he doesn’t take it well.

Following his eviction, the remaining houseguests, compete in the second to last HOH competition of the season called Star Jumper. Whichever houseguest can jump the longest will win HOH. After bouncing furiously for only a few seconds, Wahlberg gets a cramp and falls off the trampoline. The girls continue to bounce, when finally Poppy Montgomery can take no more, and relinquishes the HOH to Tori Spelling.

With Tori in power, she puts up Wahlberg and Neil Patrick Harris. It is all up to Poppy, as she casts the only vote determining whom makes it to the final three with her and Tori. She evicts Marky Mark, to his dismay.

In the final HOH, there are three parts, and the first is endurance. In a Spin the Bottle Off, Neil Patrick Harris forfeits immediately, having no interest in catching whatever VD his fellow lady celebs might have. Then after some serious smooching, Tori Spelling out kisses Poppy, winning the first part of the final HOH.

In the second part, Neil takes on Poppy for the chance to play in part 3 against Tori. The game: Cornhole, where Neil whoops Poppy 5-0.

Neil goes on to beat Tori in the final trivia portion of the HOH, and is forced to decide who to compete against in the final 2. He chooses Poppy with little hesitation.

At the finale, Julie Chen ask the finalists why they think they deserve to be the winner of Big Brother: Special Guest Edition. Poppy answers by saying, “Hi, I’m Poppy.” Then Neil Patrick Harris explains that Poppy is not a real celebrity, like him, and that she might be the worst special guest Big Brother has ever had on the show.

The votes are cast and Julie Chen reports, “With a vote of 7-0, Neil Patrick Harris, you are the winner of Big Brother”. Suddenly, outraged, Will Ferrell gets up from his seat and blurts out that he, in fact, had voted for Poppy, not Neil. Julie Chen reminds him, even were that true, Neil would still win, and perhaps he should just sit the hell down and shit the f up.

Until next time, thanks for Parasocializing.