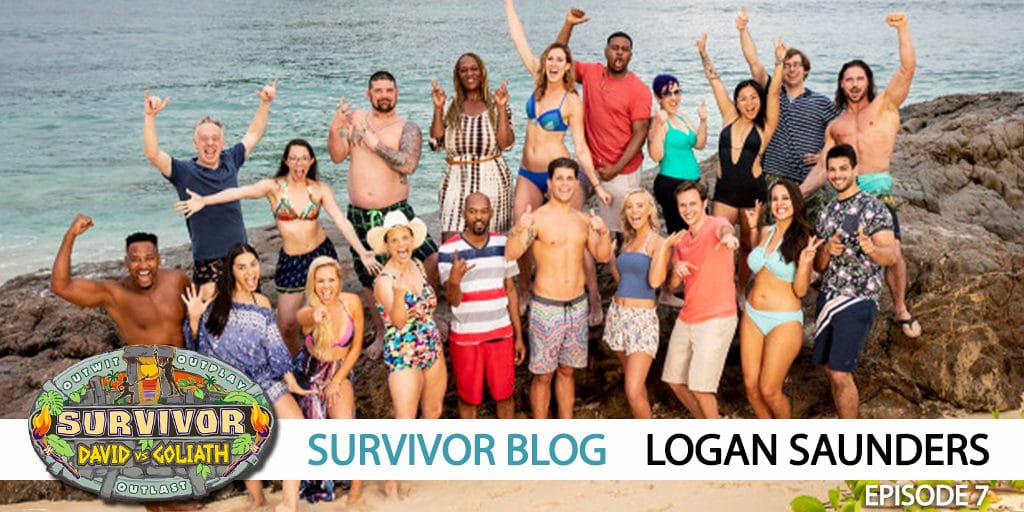 Logan Saunders recaps episode 7 of Survivor: David vs. Goliath ahead of episode 8.

Previously on Survivor: At the Tiva tribe, the men formed a bond and so did the women. At the Vuku tribe, an alliance fell apart and tensions were high. The Jabeni tribe was facing Tribal Council and the Rockstar alliance held all of the power.

At Tribal Council, Nick and Mike sent Lyrsa home (Angelina had a vote too, but whatever).

Thirteen are left; who will be voted out tonight?

Everyone is drinking coffee and omg there’s a boat with two other tribes showing up. Tiva Beach is the merge beach.

Remember when just getting to the other beach took 20-25 minutes of the merge episode in the early season with ambassadors and hikes through the jungle.

Carl just wants to get his drank on.

John’s muscle gain is made up by the 100k calorie spread on the table. He is eager to stay #GoliathStrong despite Brochacho bond with Christian.

Angelina, Carl, and Nick talk about the bossiness of the Natalie/Natalia’s. Angelina is shocked to find out Alec orchestrated the blindside. John is surprised to hear it. Alec doesn’t hear the gossip at the table as he is fond of the booze.

Mike has a pillow; Dan has a hammock. Elizabeth suggests tribe names. Carl rolls his eyes at her for her knowledge of bamboo and Fijian language.

Carl is open to going to the other eleven players to eliminate a Goliath. Cut and dry like that, right?

Christian and Nick reunite with the Mason-Dixon Line. During confessional, Christian bumps over some wood. Hell, that piece of wood could be an idol.

Kara and Dan do it on the beach. The sensors are broken out. He leaks to her that he has two idols. Kara is in on this info.

John, Angelina, Kara, and Dan share some sexy Goliath hugs as Alec walks over to join them. Angelina wishes to ride the cool wave. She wants Christian to exit early because he is too damn charming.

Obviously, Alec has no desire to stay #GoliathStrong so naturally, he makes an alliance with Christian.

ALEC: There’s gonna be blindsides…idols flushed…it’s my time to shine.

Absolutely, Alec. It is your time to shine.

What is with tribe names in Fiji going double like Bula Bula?

Elizabeth is trying to sleep while Dan and Kara whisper dirty talk for two hours.

Alison tells Mike she will stay Goliath for two votes. Mike wants to work with Alison and Alec then bring Nick into the fold.

The three Goliaths talk about bringing Nick, Christian, and Gabby to be their group of six.

Alec shows all of his cards to Gabby immediately about the post-merge plan. The cards are shown even more as Mike and Nick casually join them late. Such a Rockstar thing to do.

The four of them agree Elizabeth should be the initial David sacrifice.

CHRISTIAN: I call this alliance in a Strikeforce…people talk about David vs. Goliath being over but Alec is the only one to walk the walk [so far]

Elizabeth whispers to Nick and Carl about Dan and Kara constantly whispering last night. Will the other two give a damn? That remains to be seen.

Elizabeth pitches to Alec to vote out Dan at the first vote. Alec is hesitant as he wishes to play double agent as long as he can.

Alec, Kara, and Dan talk as Alec rats out Elizabeth’s plan to oust Dan. Man, Alec should’ve kept to himself. Dan is freaking out. Kara wonders why the hell Dan is panicking when Elizabeth is first boot and holds no power amongst any David or Goliath in this game.

Probst should toss the tribal immunity idols into the ocean.

We get a series of hypnosis swirls on a necklace as the talisman for this season.

They’ll swing a pendulum through a frame and around a statue. If the pendulum hits the frame and/or statue triggering the statue to fall, they’re out. The last person left standing wins immunity.

This challenge is copied from Australian Survivor 4.

Mike is first out. He lost all momentum early like Jeremy.

Christian out.  Carl. Both lost momentum. So does Gabby. Then Kara.

We’re told they will switch hands in five minutes. OK.

Nick is the first to be eliminated due to the statue toppling over.

Switch hands while keeping the pendulum moving. Davie sucks with his less dominant hand. So does Angelina. Then Alec.

John steps off of his platform. Well, that was unique.

DAN: Keep telling yourself how awesome you are.

Because Alison and Elizabeth are left, we get the whole David vs. Goliath rambling from Probst.

Alison sprints to Probst to hug him.

ALISON: I am literally in ecstasy.

Angelina cuts off her other Goliaths as the seven of them talk. She pushes for a Christian exit because he is the biggest David threat while Elizabeth is weak.

ANGELINA: In the military, you never want the enemy to know where you’re gonna hit.

Angelina keeps pushing the military narrative. Don’t be a bunch of emotional weaklings!

Overall, Angelina is absolutely right–Angelina is the biggest threat to her Goliath group. However, she is too transparent about leading the charge and -why- Christian has to go. Christian will go through between the cracks to get in with most of the Goliaths.

DAN (confessional): Your husband is in the military–you’re not.

Here’s the problem, Angelina: Christian has already fallen between the cracks. It’s too late to stop that. You need to work with Christian rather than push for his elimination. You gotta read the room. Christian is in the tank while Elizabeth is out of the trench and in the middle of No Man’s Land.

Alison, Alec, John, and Dan say they want Elizabeth gone. John offers to talk to Angelina about what the real plan is going to be.

John suggests to Angelina they should go for a walk or if she’s okay with the switch. She quietly protests before agreeing to walk.

ANGELINA (to JOHN and ALISON): Dan is being super f–king condescending.

DAN (to other Goliaths): She needs to f–king grow up.

The Goliaths may not even make it through one vote together.

Angelina sobs quietly in the jungle alone as Elizabeth randomly joins her. They have minutes to talk in isolation from the others. Angelina tells her -everything- this afternoon.

After the Davids all talk about this turn of events, they agree to blow up everything Angelina has done at Tribal Council and have her exit.

ANGELINA (sobbing and breathing): I got this.

Oh boy. Your day is about to get a whole lot worse, Angelina. Jack Bauer is gonna be like “damn, I’ve had better days than you.”

Christian talks about factorials when correcting Alison about the multiplication of alliances to juggle now.

ANGELINA: Goliaths are taking a conservative stance and I am united behind them. . .

Elizabeth rats out the waterfall plan.

ANGELINA: This is just bad strategy.

For you or for Elizabeth? Oh boy.

Everyone agrees Angelina was aiming to get Elizabeth’s jury vote before being sent out.

Gabby starts crying about Elizabeth is just trying to play and was throwing the fellow Davids a lifeline.

ANGELINA: They’re just using me as their lifeline–

GABBY: What are we supposed to do? Sit here and be picked off one by one.

Angelina says it was a raw human moment where “she couldn’t lie.” Natalie’s jacket may say otherwise for the Jabenis sitting at the merge.

I should note EVERYBODY is whispering together. Dan and Alec are sitting at opposite ends but stop to talk about sports while Angelina is battling a 12 vs. 1 attack at Tribal Council.

The Goliaths even whisper to Christian.

ANGELINA votes ELIZABETH. “Seriously, it was poor form tonight. I was trying to help you out.”

Well, you certainly weren’t helping yourself. Between this, pushing the vote against Christian when no one was with you, and not telling anybody about your front-stab of Elizabeth.

The first ever 12-1 vote in Survivor history?

Elizabeth has her torch snuffed.

ELIZABETH: Good luck, I love you all.

ANGELINA: Funny way of showing it.

I think what saved Angelina tonight is nobody trusted her to begin with and weren’t blindsided by her pulling a tactic like this.

She’ll go home in her severely weakened state sometime in the next few weeks or be a Final 3 goat. She has no chance of winning this game.

Next Time on Survivor: When trust dissolves, and bonds crumble, no one is safe.

So I was right–A Vuku member was done this episode. I just expected Elizabeth to be used rather than abused.

It makes sense, though. She really was the sacrificial lamb for the former Davids and the Goliaths just want to stay tight long enough to not let the Davids bust out their slingshots and exterminate them because of the season’s theme forced upon them.

It is amazing this was our first unanimous vote ever at the merge, and it was done with a massive field of thirteen people. Elizabeth really didn’t have anyone in her corner tonight! I wonder if she’ll start splitting bamboos at Ponderosa and do her trademark sneer from the jury box?

This episode was mainly about having players measure each other. What are their strengths? What are their weaknesses? They learned Angelina has a hell of a lot of weaknesses. Angelina is used to having things go her way on a daily basis follow her line of reasoning, but when twelve other people have equally valid lines of reasoning, somebody like Angelina is going to be exposed like this over and over again. She is particularly exposed when nobody is willing to give her a goddamn jacket.

The true game begins next round. If you’re into more of the Survivor game-botting, something tells me these next couple of weeks will be your cup of tea!