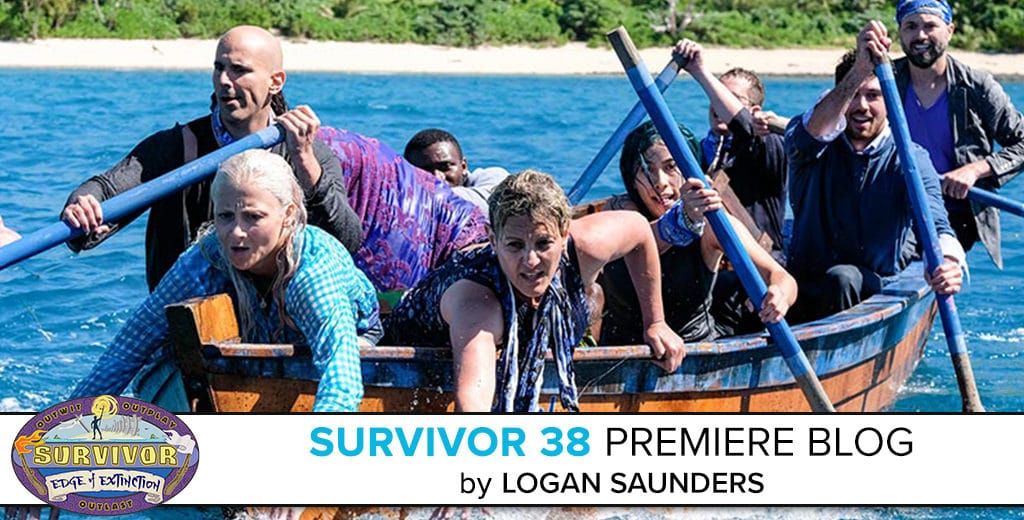 Logan Saunders recaps the premiere of Survivor: Edge of Extinction ahead of episode 2 in his blog entitled, “Laundry Service Volume 3.”

This is coming to you from day 64 of day 180 of Logan Saunders Around the World. I am in my third country of twenty, and my second continent of four (35 days in Japan, 21 days in Philippines, and however many that works out to in Australia before I head to Bali in a few weeks). By the time this season ends I’ll have passed through southeast Asia, South Africa, Egypt, and will be somewhere in Greece or the Balkans. Ah, the digital nomad life!

Wardog is a military guy who is also in law school. He is going to hide it.

Wendy is a super mega ultra-fan. It’s her life.

Four returnees are on a separate boat. Joe’s moustache like a character from Guess Who? stands out the most. It shines better than everybody else. We also have Joe, Aubry, and Wentworth.

I should note the forums are about 90% “Team Wentworth! Team Aubry! Team David! Team Joey Amazing!”

So, I am just going to focus a bit more on the new players.

I don’t mind the Edge of Extinction twist in a season filled with returnees. To me mixed returnee and newbie seasons are very asterisky, and why not make it extra asterisky by inventing a super gimmicky twist. It’s like an MLB or NBA All Star Game. The stats don’t count.

By the way, this premiere is only one hour rather than the typical 90-minute premieres of recent seasons.

David is the only guy not a three-time player in this cluster.

I suspect Aubry will be first to go in this group of four. I think much like Game Changers and a good chunk of Koah Rong, she’ll have a tough time earning trust.

David will have the easiest opportunity to blend in and Joe could potentially challenge whore his way post-merge after being leader of a tribe pre-merge.

Wentworth? She has had such inconsistent experiences I have no damn idea how she’ll do.

We have a marooning. Somebody knows Wardog’s name already. I don’t know how. Probst does an impressive vault.

Keith is a poor swimmer and nearly drowning. I know what we’re all thinking–especially my dad.

I wonder if players are trying to dissect the “Edge of Extinction” title.

RICK: No one thinks news anchors are tough.

What about Joey and Kelsey in The Amazing Race 27 where Kelsey ran the final leg with a broken tailbone?

Rick is amazed by the plethora of food.

Wentworth is listed as being from “Second Chance.” It should be changed to Third Chance. She copies the Spencer Bledsoe confessional of “I need to get to know people on a human level” rather than people on a robot level or something.

There is no discussion of the tribal divisions, so we have to figure it out on our own. Especially when we don’t have an official intro.

David is the other returnee on this tribe. He tries to make friends too.

Wendy teaches Reem and Rick how to do palm fronds. She has mild Tourette’s. Hopefully none of her Tourette’s ticks occur -only- when she is deceiving somebody. That may be a tell.

And because it’s a returnee season, Joe gets the next confessional.

JOE: I need to put Joey Amazing away.

At least you tried, man.

Aurora is better set for this game. She doesn’t have to do anything. She is gay and on Team Joe.

Joey Amazing: So amazing he can attract gay women. Wow.

Ron says they have all the rations and fire on the first day. He also has a secret advantage. Ron sprints into the jungle in a not-so-subtle way. He must dig three feet east of Tree Mail.

He has The Advantage Menu.

It expires after the third TC.

Sooooo this is inconsequential. . .and I assume this means we go to three tribes of five after the third TC.

Joe and another guy try to decipher Edge of Extinction but look palm fronds. Aubry is the next confessional of course.

AUBRY (to JOE): We’re not going to make fire forever.

. . .What will that accomplish?

Gavin wants the title of Sole Survivor. He eats fried pickles in the south. He has a bond with Eric the Firefighter.

GAVIN: Someone new needs to win this game.

Eric wants Aubry out since Joe is the perfect shield. He really is. A broad-shouldered shield.

Reem is pleased with the tribe. She is washing and drying clothes because Older Lady.

Lauren voices everyone is annoyed by Reem interfering with everyone on the clothes.

Keith tells Reem she has a motherly vibe. Reem cusses him out for it. Keith is a 19 year old and openly admits to being a mama’s boy. It’s like Ryan and Chrissy from S35.

Keith reveals he learned how to swim just before the season started. Reem teaches him. Keith lives in a trailer deep in the country. Yeah, not many swimmers from trailers.

Wendy, Reem, and Keith are in the water. The other six from shore see them and immediately target them by indirectly creating a six-person alliance.

Yep, the first three targets are the older lady, the Black guy, and the woman with Tourette’s while the six young white people align. The Internet and Reddit are going to love that.

The tribal idol is a freakin’ dragon. They also get fire in the form of flint about ten hours before the other tribe.

Everyone runs through the brief rope pit.

Joe and Chris use pure strength to climb the rope and ring the bell. Impressive. It’s like high school gym class.

Now they go up a rope ladder. Both tribes are equal.

There is now a three-tier single balance beam. Wendy can’t do it. Joe crosses first and unties a knot to make the balance beam easier. While this is happening Eric crosses and helps Joe with knots. Aubry crosses.

Nobody on Manu can cross. Everyone is taking a turn. David’s skinny feet complete it.

Kama undoes the ropes. The balance beam turns into a beam.

Manu has four people across. Wentworth gashes her head on the way down. She is crying.

Manu releases the ropes. I estimate they are five minutes behind.

Lauren is at the top of the crow’s nest. Slide is dropped.

It’s puzzle time. This truly is a gigantic slide puzzle. Where is Christian?

Kama keeps going and then it FREEZES. It’s the Hold Up Bro of challenges. The stalling works as they figure out the remaining sequence.

Kama wins immunity! Or as the Internet likes to say, Joe and Aubry’s tribe!

Probst nearly forgets flint–because they already have fire, I presume.

Wentworth does have a nasty gash on her face. Suddenly she wears the buff on her forehead to cover it up.

Lauren has a cartoonish “I am soooooo pissed.”

Reem notes Lauren and Kelley are tight. She wants them separated and voices it to Wendy, Keith, and Rick. Reem is -really- pressuring them. Keith doesn’t like the vibe at the well and goes to the shelter and reports the gossip to Lauren and Kelley.

Wardog and David “feel out” Wendy. Wendy is outright loyal to Reem. Wardog tells her the Reem Ship is a sinking one.

WARDOG: Let me talk to David in private really quick.

Wardog tells David they need to go after Wendy for her stubbornness and loyalty. . .don’t you want to vote out the super loyal person’s ally because then she can be loyal to you?

Reem starts wielding the machete in front of David saying how much bullsh-t it is that she is the target.

Some guy we haven’t heard of yet says Reem is too much. He is an extra.

*I looked it up. His name is Chris.

Everyone reams on Reem.

REEM: I have been watching since day one. This is a nightmare. . .I am just surprised. Famous last words–don’t be the first one voted out.

We vote. Nobody plays an idol.

Good thing she couldn’t bring the machete to Tribal Council.

REEM: I hope it pours down rain on these people. Ridiculous. So lame.

She keeps walking and walking then. . .

IF YOU DO NOT WANT TO PLAY ANYMORE, FOLLOW THIS PATH AND THE ADVENTURE WILL END

IF YOU WANT A CHANCE TO GET BACK IN THE GAME, TAKE THIS TORCH AND GET ON THE BOAT

IF YOU WANT TO LEARN HOW TO RAP, GET ON THIS BOAT TO CHILL WITH THE NOBLE ONE

Naturally Reem takes the torch and heads on a boat to Extinction Island.

REEM: Oh my god. There is nothing here. Holy crap. What is it?

There really is nothing there. This isn’t Redemption Island or Exile Island. This is going to be miserable.

Next Time: A phoenix must burn and dries from the ashes as returnees get targeted.

REEM: You’re mad that I put your freaking clothes on the beach. . .it’s wet and it’s cold. Just got to stick it out at the Edge of Extinction.

I assume eliminating returning players is a misdirection next week.

Keith and Wendy beat all four returning players in the confessional count department this week.

Surprisingly, only Chris and Julia get zero confessionals. For a 40-minute episode which includes a trip to Edge of Extinction.

Not much to observe from this episode except the renewed complaint in recent years of minorities and older people getting targeted on the US version of Survivor. I guess Shane Gould and Lisa would have a tough time in America. Reem is the lethal combination of being loud and an older lady–how many seasons can you be those two things and survive beyond a vote or two?

The challenge requiring somebody to pull themselves up on a rope is one of the most physical obstacles they have ever had.

Both camps have it easy. Lots of food. What happened to Ghost Island where rations were slashed by half?

Hopefully on Edge of Extinction it truly is just a pot and machete. I really want to see how far players will push themselves before quitting. It needs to be made impossible to make it to day 36 or 37 on there. Make challenges exhausting too. I need more than a Wentworth gash.

Overall, the asterisky season begins. I’m just happy the Advantage Menu is pointless and no idols were found this episode. I am sure two idols will be claimed next week, though. Most likely by returnees to deflect the “Returnees need to go home!” storyline.

Reem is probably the only player who could go to Extinction Island alone and make it entertaining as a solo sport.