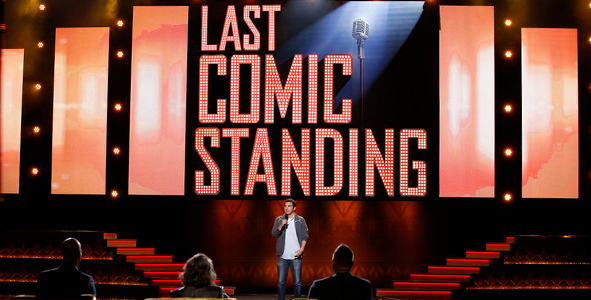 For those of you who may not know me, or do not recognize my name without Rob yelling a J.B. Smoove impression, I’m Mike Bloom, and I currently co-host the Last Comic Standing recaps with our very own RHAP #MonopolySlumlord, Rob Cesternino.  For those of you who have been listening all season (and presumably have given a lot of business to Draftkings.com for our stellar ad work for them), you’ll know that last time Rob and I recorded, we were a little up in the air as to whether we wanted to do a podcast on these “recap” episodes that we had this past week.  After seeing them, I felt that there was definitely enough juice to power us through, so Rob and I settled on a happy medium and went with a blog post.  This is my first foray into blog writing, so I hope you all enjoy it.  If you don’t, I’ll just say it was ghostwritten by Dan Heaton.

Let’s speak first to the format of these episodes, specifically Standing Room Only.  I initially expected it to be a recap episode in the format of Survivor days of yore, which is to say a very basic summary of the season thus far with a couple of additional never-before-seen scenes.  However, this show skewed much more towards a version of “The S&@# They Should Have Shown” format from The Challenge, which is to say chock full of absolutely new material.  However, in true NBC fashion, the episode was not only promoted oddly, but also schizophrenic as all hell.  So come with me as we go down the rabbit hole, but watch out for that mouse that Roseanne is still looking for:

50. Rob Christensen – “I wanna hear you scream like you’ve never screamed before!”

49. DC Benny – Mom used to buy his clothes from the thrift shop.

46. Kimberly Clark – Keisha vs. Oops I Thought She Was Keisha.

44. Aida Rodriguez – Puerto Rican means a black person who speaks Spanish or a Mexican with papers.

41. Mike Lawrence – The parental logistics of naming your child Scar.

39. Nikki Carr – Getting fired for sleeping on the job.

35. Bob Kubota – Talking to a college professor about his nationality.

31. Rod Man – Got pulled over in the carpool lane.

30. Emily Galati – Arizona has the most grandparents.

27. Dave Landau – Annoyed with showing people pictures of their children.

26. Billy Wayne Davis – The similarities between rednecks and gay men.

24. Mark Normand – The misunderstandings of working as a janitor.

20. Dana Eagle – Meeting her maker is a customer service complaint.

19. Jasper Redd – Roots is like Star Wars for black people.

18. Zainab Johnson – When is she truly crazy in the relationship.

14. Aida Rodriguez – Teaching her daughter how to deal with bullies.

13. Erin Jackson – Met the worst person ever through online dating.

11. Karlous Miller – The lives of the Hispanic people in California.

So there you have it.  A two-hour special that will probably take two days to read.  I started watching the Top 100 jokes special and realized that there wasn’t anything, well, special about it.  But overall, I was happy with what we got to see last Sunday.  Though some editing choices were strange, we really got to know these eight comics and, though we won’t be picking the winner as a nation, it’s nice to know more about these people whom I assume will get ravaged by the critics as their NBC show goes through the poop chute.  But looking to the near future, we’ll be back next week to recap who has the dancing skills and interviewing prowess to go tit-for-tat with Ellen, and who will be eliminated and declared as funny as Gallaghers 1 and 2.