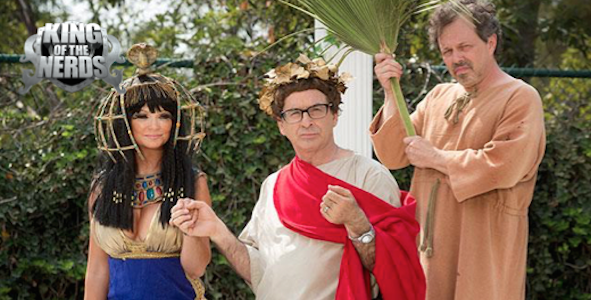 All right, ladies and gentlemen – you know what we’re here to talk about. What’s that, you need a quick refresher? Allow Liz Lemon to remind you five times in rapid succession.

That’s right, “King of the Nerds” blogs are back for Season 3! And fortunately coming with it is a third season of “King of the Nerds” itself, otherwise my self-penned fan fic would be required reading, and no one (except Virgil) wants that. TBS left us hanging for a few months there, but good for them for realizing that if they owed anybody another season of TV’s second best* reality competition show, it was themselves.

(*Would I put my job at risk if I told the readers of Rob Has a Website that “Survivor” does not place in my personal “top 5, baby” of the best reality competitions currently on TV? Well too bad, because “Survivor” is not better than “The Chair,” “King of the Nerds,” “Masterchef Junior,” “Big Brother Canada,” or WeTV’s forthcoming “SEX BOX”)

First off, permit me a bit of gloating. So I’m watching the season premiere and up on the screen comes an irritating lower third telling me to follow the hosts of the show on Twitter (uhhh duh doy, TBS, like I’m not already following Bobby Carradine for all the “Lizzie McGuire” #TBT’s). Except I notice this glaring typo: 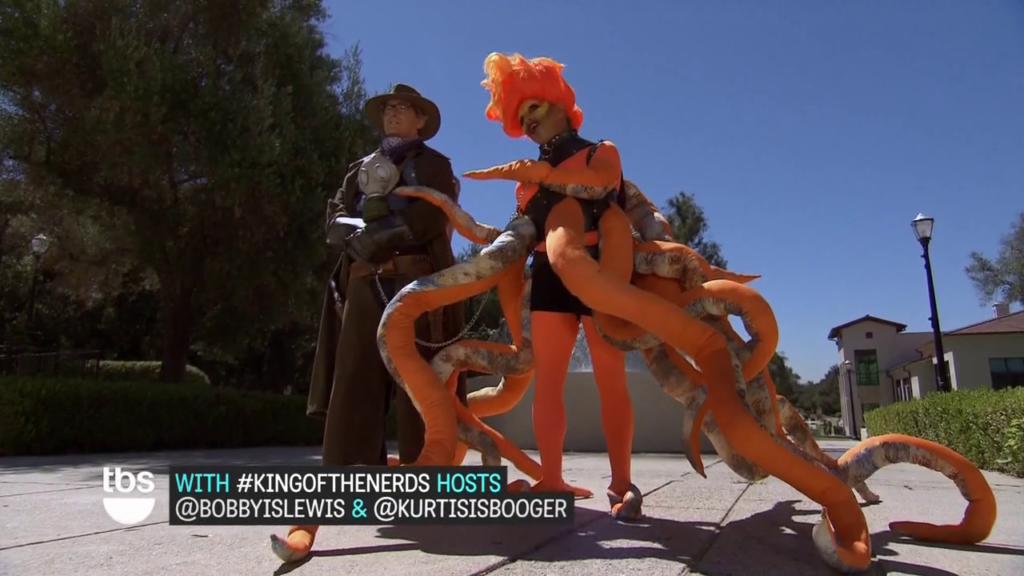 Jeez, Ted Turner! Curtis “Kurtis” Armstrong is making you this really great television show and you can’t be bothered to spell his name right! Were you too busy trying to decide if “Murder by Death” would air 12 or 13 times this month on Turner Classic Movies? Once again, a nerd crushed by the jock.

So I figure, “Okay, not a huge deal, I’m sure it’ll be fixed next week.” No such luck. While I feel moving to Friday nights is a net positive for the show, “King of the Nerds” will still be on the renewal bubble this spring, and social media could play a big role in keeping Curtis and crew out of cancellation’s clutches. Botching a Twitter handle is not going to help any uninitiated twits join the conversation in the interactive living room.

I decided after episode 2’s repeat offense that Curtis should be informed, in case he was ignoring those chyrons like the editors. I sent this tweet and, lo and behold, from episode 3: 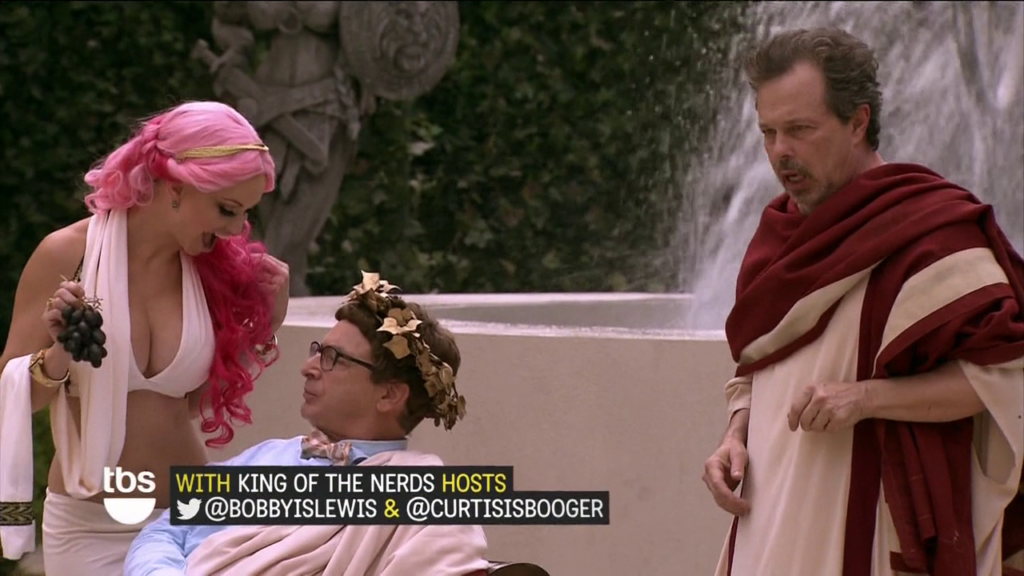 Welcome back, Curtis! Plus this was the first episode to pop a #NerdsRule hashtag next to the TBS bug: 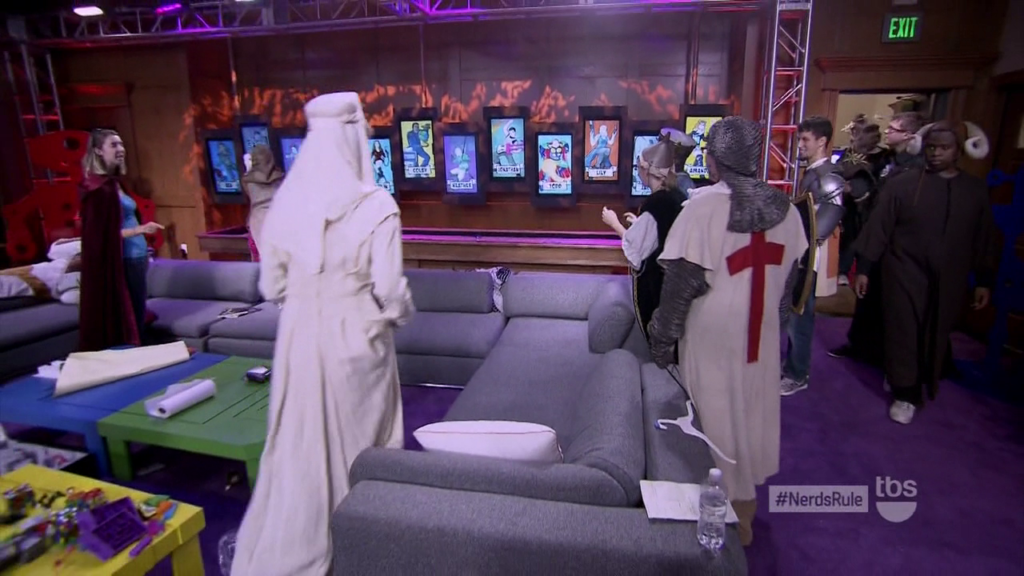 Look, am I saying this was my doing? Not at all. I am simply saying that you’ll have me, and solely me, to thank when TBS cites incredible social media support as the primary factor in renewing “King of the Nerds” for season 4. Please, sit down and hold your applause. Save that for when the pickup is made official.

But I suppose there was an actual episode of “King of the Nerds” this week to talk about, and a pretty great one at that. We talked on the podcast about how the most recent Nerd Offs lacked a strong “nerdy” core like manga or cosplay, but I actually like to see fun and creative challenges in which players can gain advantage through intellect. In the case of the “Nerdgata” Nerd War, the teams had to put their brains to work and take into consideration factors like buoyancy, the shapes of their crafts, and what materials would be most resistant to water.

But since this is “King of the Nerds,” the nerds still got in taped-up scraps of cardboard and raced them across a swimming pool. And oh, was that some glorious television. It didn’t really surprise me that a more simplistic design proved to be more effective, even if all the boats were eventually waterlogged and flattened as they were dragged back to the finish line. (I also appreciated Team S.M.A.S.H. naming their boats for Nerdvana’s two fallen comrades.)

After the losing House Hooloovoo decided to throw Todd the Bod to the wolves, we saw perhaps the biggest real “fight” ever thrown down in the hallowed halls of Nerdvana, with things getting arguably uglier than previous nerd showdowns like Josh vs. Danielle in the first season or Zack vs. anything with a pulse in the second. Even the fight between Moogega and Danielle from Season 1 (which was alcohol-fueled and seemingly much more playful) doesn’t really hold a candle to Todd vs. Lily and allies vs. the peacekeepers. By the way, I continue to find it very endearing that even when contestants on this show enter nerd rage mode, at least one other nerd usually steps up to help with Nerd War prep, like we saw last year when Zack came, with his tail between his legs, to the group of people he had just insulted and Chris offered to be his advisor. Of course the fact that this time it was Ori, one of the more bizarre characters I’ve ever seen on any reality show, only made the whole thing wackier. I don’t think anyone will be happier than me if Ori ends up winning the season, even if the Secret Six seems determined to squash that soon.

By episode’s end, after a very confident thrashing from Kaitlin (who could be on track to claim the Nerd Off queen title from Season 1’s Genevieve), we bid farewell to Toddzilla. I remain torn on whether or not I will miss him. Is it possible that by remaining on the show he could have been a swirling tornado sucking up everything in its path and getting bigger and crazier with each passing day? Perhaps. Is it also possible that his attempts to manufacture himself as the villain would have only proven an irritating retread of last year’s reign of Zach tyranny? Probably more likely.

What I can tell you, fellow nerds, is this: given how much horsing around we got in this episode when the editors gave us a slew of evocatively equine confessionals throughout the Nerd Off, how on earth did Todd not meet his demise by mustang trampling? And speaking of being a neigh-sayer, the lightning bolt gag unfortunately led to the capper of Curtis and Bobby zapping Mindy the Pom Pom Kitty’s nether regions, a kind of gross, cheap gag this show has long proven they’re above. And to think, Curtis, I scored you millions of new Twitter followers this week!

Yay or neigh on losing Todd? Do you have any leftover feels to get out about the alliance that weren’t already addressed in the podcast comments? Who do you think will be next to fall at the hands of Bobby’s deadly iPad? And on a scale of 99.5 to 100, how excited are you for the return of NERD ANTHEMS?!?! Talk nerdy to me in the comments!