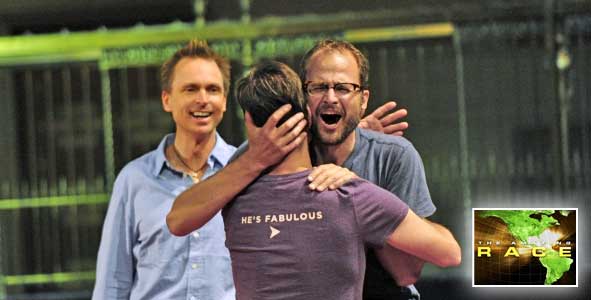 This season of The Amazing Race was many things, but predictable it clearly was not. Sure, we can tinfoil-hat around about how the Beekmans got a warm-fuzzy edit so we’d root for them as underdogs, but truthfully, nobody really saw that coming. Even if you were semi-spoiled, and you knew it was probably true, it still didn’t seem true until they hit the mat. But it happened, and here we are, with a backpacker team steamrolling over three arguably much stronger teams to take home the million dollars and the title of “biggest upset of the weekend that didn’t involve being cold-cocked by Juan Manuel Marquez.”

I hate it when people—either fans or contestants—talk about “deserving” to win on Survivor, and I hate it when they talk about it on The Amazing Race even more. If it’s possible, “deserving” to win is even less of a factor on the Race, where your own prowess and luck determine how you finish, than it is on Survivor, where others determine how you finish. Did you finish ahead of everyone else? Did you follow the rules as they were given to you? Yes? Yes? Then you deserved to win. Full stop. We can absolutely say that the Beekmans’ win was not the most satisfying win based on their prior performance, but to say they didn’t deserve it is unfair. (Fun fact: the first to win their season without winning any other legs was Eric and Danielle from Amazing Race: All-Stars in season 11. And their win was FAR more unsatisfying. Kisha and Jen, in Amazing Race: Unfinished Business also managed to win only the final leg, but after three consecutive close second-place finishes, that was a little more palatable.)

Simply put, when you win the million dollars, it’s not because you won the whole Amazing Race. It’s because you won one leg of The Amazing Race. Sometimes that one leg does indeed end with a very strong team using the insane momentum they’ve built up from winning a lot of legs to cruise to an obvious victory (think Dave and Rachel last season). But admit it—you complain when that happens too. We need the strongest teams to get upset every once in a while. It keeps things interesting. You wouldn’t want Ozzy to win every single season of Survivor, would you?

You might even say the Beekmans won their race like Sandra Diaz-Twine won Survivor—it was anybody but them going home until the final phase, when they suddenly kicked it into high gear and finished first. They didn’t need to finish first in any challenges. They didn’t even need to be at the front of the pack. And instead of making a game alliance, they chose to hang out and have fun with the players they liked best. To call this a “strategy” in the context of The Amazing Race is slightly unfair, especially since at least half of what happened to the Beekmans was probably not intentional on their part, but circumstantially I think there are more than a few similarities.

All season long, this season’s theme has been alliances, from Amy and Daniel losing the first leg because they gave directions to a team they thought was behind them to Abbie and Ryan’s hand-holding, competition-eschewing bond with the Beekmans. And in the end, alliances turned out to have very little to do with the outcome. Midway through the penultimate leg, the cliqueish resentment of the past few weeks finally took a back seat to focused, dedicated racing.

The final leg, while not completely tailor-made for the goat farmers, definitely worked to their advantage. For one thing, they’ve both lived in New York City. This certainly helped them as far as knowing their cab was going the right way, although that doesn’t guarantee they’d have known their way around Brooklyn or Little Italy, and Gotham Hall is hardly a landmark every New Yorker would know (I asked four natives with a combined 100+ years of New Yorkerhood, and none of them had ever heard of it—also, I work five blocks from it and I’d never heard of it either). And it sure didn’t hurt that the Chippendales’ cab driver hit a few bumps. But Race luck and game design only went so far. It may have helped to lead the Beekmans to the end, but they still had to pull it together and win, and thanks in large part to Josh’s excellent problem-solving skills at a grueling-looking memory task at the UN, that is exactly what they did. Congratulations and great work, guys.

I took in the finale from my usual vantage point at TARCon, where emotions ran high throughout the episode. Twinnies, Chippendales, and Beekmans alike were polarizing figures who drew both cheers and boos for every misstep or triumph. At the end, though, everyone went nuts with happy cheers—I don’t think we were all finally united on Team Beekman, necessarily, so much as celebrating a dramatic cap to what’s been a very fun season to watch. We had fresh locations, interesting teams, great use of in-game twists, and a relative lack of insane inter-team fighting. It’s probably not the best season we’ve ever had, but it’s far from the worst.

After the show, a number of this season’s racers (as well as numerous race veterans, other reality-TV alumni, and at least one professional athlete) stopped by the party to chat with fans and get congratulated. I had great chats with Josh and Brent, Natalie and Nadiya, Abba, and Will, among many others, and everyone was incredibly nice. (Truthfully, though, I’ve never had a bad chat with a racer, even purported villains. You have to be at least somewhat personable before they let you be on television.) Many thanks to all of the fans and racers for coming out and making it such an amazing time.

Finally, tonight’s finale was a little bittersweet as we watched the racers travel almost exclusively through areas that have since been seriously damaged by Hurricane Sandy. Although the Navy Yard and Coney Island weren’t the hardest-hit areas, and Lombardi’s is once again open for business, none of these three neighborhoods will be the same for quite some time. Let’s send good thoughts as the East Coast continues to recover.