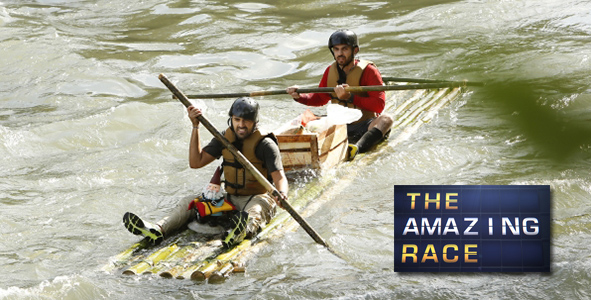 Given that Malaysia was the focus of this week’s episode, I would be remiss if I did not start off this week’s blog by expressing my deepest sympathy for the families of passengers on Malaysia Airlines Flight MH370. I hope that you will all swiftly find resolution and peace in the face of this tragedy.

Okay, now to the Race.

Last season, many of the early legs involved two flights several hours apart. A team who caught the first flight would have had to screw up catastrophically—we’re talking quitting a Roadblock and THEN getting lost catastrophic here—in order to be in any sort of danger of getting eliminated, which led to the viewers taking in two races, the one for first (yawn) and the one for last (meh).

When the first leg of Season 24 kicked off with two flights close enough together that a team on the first flight wound up in last place, I thought maybe the Race had realized that last season’s two-race structure was a mistake. Then last week, there was no actual travel, which I don’t usually love, but man, did the Race ever kick the excitement up a notch to compensate. The order was shuffling constantly, the team in first place dropped to last place two different times, and there was a heated 7-way footrace to the mat.

Last week’s episode was enough to make me think maybe I’d been wrong to dread this season, even if it is packed with polarizing teams and what’s rumored to be a limited and underwhelming course. And then this week I was reacquainted with that old dread as we slogged through an episode that was maybe even more anticlimactic than your run-of-the-mill non-elimination leg.

Which isn’t to say I have anything against Kota Kinabalu in general. It’s a great location. In fact, given Sabah Province’s storied history as the setting for the first-ever season of U.S. Survivor (and many subsequent international seasons), I’m prepared to offer this region a spot in the Reality TV Location Hall of Fame. But the simple act of getting there ruined this episode from practically minute one.

Upbeat but not a great racer.[/caption]

With only two flights to choose from and all nine teams leaving within minutes of each other, this leg basically punished three teams whose cab drivers hit too many red lights on the way to the airport by smacking them with a three-hour penalty. Which might have been fine if there was a chance that any of these tasks would have taken the first wave of teams longer than three hours, or if getting to any of these places was going to prove a significant challenge. But this week’s tasks were quick, if not easy. So the first six teams had their own race, leaving John and Jessica, Joey and Meghan, and Brenchel to duke it out for last place.

Which isn’t to say I don’t think we would have gotten the same outcome if they HAD found a way to level the playing field a little somewhere along the way. Plain and simple, Joey and Meghan were not long for this race. Contrary to what I’m being told by diehard Joey and Meghan fans who have never seen a season of the show apart from the ones the YouTubers were on, they really weren’t great racers. They had Meghan’s ingenuity and Joey’s relentlessly upbeat attitude in their favor, but it wasn’t enough in a season full of strong, experienced teams. Their first time out, they went far because several strong teams went out very early. They weren’t going to be so lucky twice. I think we all knew that on some level.

But on the Amazing Race, as in life, it’s the journey that’s most important, not the destination. There are probably a few easier and more surefire ways to acquire a million dollars or win a trip to Budapest (whipcrack) HUNGARY! (That was just for you old-school TAR fans.) We don’t tune in solely to see someone handed a prize and find out who gets kicked off. We tune in for the travel, the tasks, the local color, the teams, and the suspense. And boy, did Race brass ever suck the fun out of this particular journey. Throwing in a few jump-cuts to amp up the race for first between the Cowboys and Dave and Connor does not compensate for already knowing two-thirds of the racers were going to be just fine. And when the remainder of the episode was pretty obvious about the fact that actually, eight-ninths of the racers were going to be just fine, what’s my incentive to keep watching? There’s only so much entertainment I can derive from repeated shots of Big Easy emerging from cabs. (Although that well’s not totally dry yet, Race. You can show that a few more times if you like. It’s still funny.)

Poor Rachel. TAR fans everywhere have been waiting on tenterhooks for the inevitable collapse of her recently cool facade, and our patience finally paid off this week. To a point. However, this wasn’t exactly the Rachel meltdown we were all expecting. Sure, if you closed your eyes, you could almost imagine that raft-losing Rachel was Season 20 salami-tasting Rachel for a moment. But that moment was fleeting. Look, those rapids would probably have been scary in an actual seaworthy raft, let alone the hastily-constructed bundles of sticks they had to use. Given how banged-up Luke was, and how many people’s rafts didn’t even survive the trip, almost nobody got through the whole course without incident. Old Rachel would probably STILL be in hysterics, faced with this kind of terror. New Rachel had a brief moment of irrationality, pulled herself together, and for the most part kept all her sequins intact. For his part, Brendon seems far less put-upon than he did last time we saw him, suggesting that Rachel’s newfound maturity might be an across-the-board thing, not just a race-specific thing.

Rachel’s not the only one who has grown up somewhat since the last time we saw her. John and Jessica are still finding their footing, but Jessica has stepped up to take a leadership role on her team. Dubious Native American allegory aside, her ingenuity with the blow gun allowed them to take a decisive lead in the only section of the race that actually mattered. And without an Express Pass to wave around, John’s acquired a little much-needed humility. While I don’t think they have enough Race experience and raw talent to be a real force to be reckoned with, I do think we’re seeing them slowly find their groove.

The Afghanimals, too, are a far cry from the devious clowns we saw in Season 23. I noticed it even before they stated their intent to avoid lying this season. Sure, they can’t help but mug for the camera every now and then, but they have dialed it back considerably. They are relaxed for the camera, working together easily, under the radar, and focused. I grudgingly admitted that they were good racers last season—it’s possible they’re becoming great ones now.

And speaking of great racers, I may not be their biggest cheerleader, but I do have to admit that Jet and Cord are in it to win it this time around. They make quick work of almost every task they’re given, and they’re basically setting the pace for everyone else this season. However, they have never not been good racers. It just happens that they tend to make game-crippling errors due to a simple lack of attention to detail. They’ll take a taxi when the clue instructs them to walk, or they’ll solve a puzzle incorrectly, or, as they did this week, they’ll miss a clue that’s right in front of their faces. If they can be a little more methodical, the third time may well be a charm.