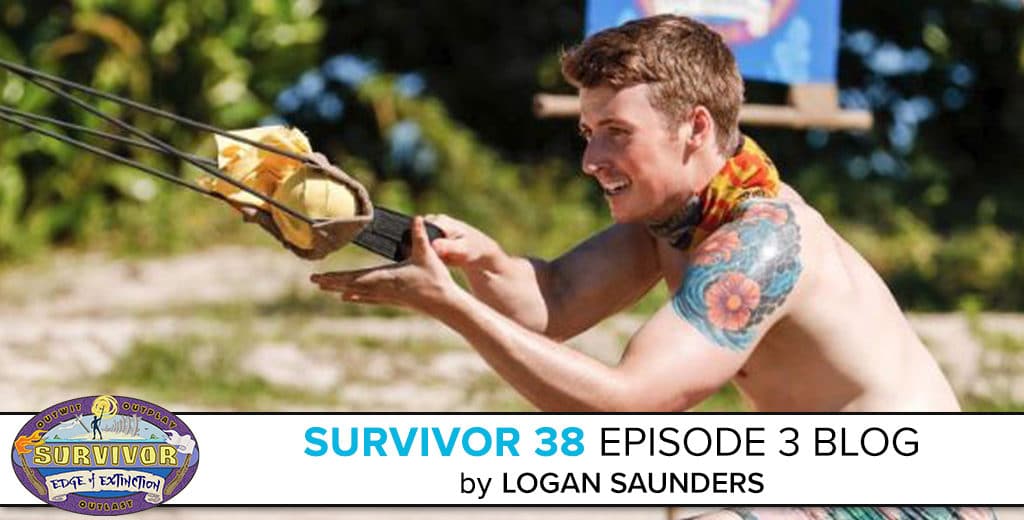 Logan Saunders recaps the third episode of Survivor: Edge of Extinction ahead of episode 4 in his blog, entitled “Edge of Boredom.”

Previously on Survivor: Heat was still on the returning players on both tribes. Chris wanted to bring in Wardog for a blindside but Wardog had his own agenda. At TC, Keith was voted out.

Reem hasn’t eaten in days despite just saying last week she had a couple of bites of coconut.

Reem is no longer quitting because she is in the “motherly” role to take care of Keith.

There are two bottles with their names on it. I guess they didn’t want to make EoE completely boring for the audience. I would prefer it if boredom was at an extreme to break down the players, but I guess the camera operators needed to be entertained too.

Reem and Keith do some intense scaling and about fifty steep steps up the cliff. More walking. More hiking.

Eventually they find rice. . .but Crystal Cox spilled it beforehand so there is nothing for them to eat. They have to do that long hike daily.

An episode three reward challenge? This is rare as of late.

They will race to assemble a wheelbarrow. Push it throw obstacles. Collect sandbags. Dump sandbags into a trough. Use the pieces to build a slingshot. Use the slingshot to knock down huge freakin’ targets.

Their reward? Comfort or chickens. They must choose one or the other. 3 hens. 1 rooster.

Aubry and Ron are sitting out for Kama. Ron is the guy who found the advantage on day one and did the dancing last week.

Both tribes’ wheelbarrows collide a couple times on the course. It’s a dead heat as the sandbags are released.

Joe, Julie, and Eric beat David, Wardog, and Devin to the slingshot portion.

Aurora, Gavin, Julia, and Victoria are building a slingshot.

Manu finds the wheelbarrows too heavy to dump the sandbags. Probst is frustrated.

Kama assembles the slingshot. Gavin sucks at it so Julia steps in to knock one.

Chris has three down. One to go. He does it.

Manu wins reward! 1-2 in challenges. They picked the wrong type of challenge to win. All thanks to Chris.

Wendy has a wicked bruise on her ankle. Her ligaments are on the edge of extinction.

Wendy has to be hoisted into camp by two of her tribemates. She is nervous because she has never broken a bone in her body before. Wendy cries in front of the tribe and in confessionals.

WENDY: The players signed up for the game; not the chickens.

Wendy pleads with Rick to not kill a chicken.

WENDY: Would you tell on me if I release the chickens? . . .I need an accomplice.

A jailbreak to save chickens. Rick is more amused by this than pissed off. She is casting gold and the only person worth watching on Manu. This is hilarious. Ankle break to jailbreak.

Victoria breaks down the two alliances of the tribe. It is 6 vs. Joe, Aubry, and Aurora.

Victoria and Ron discuss who to take out between Joe, Aubry, and Aurora. Victoria wants to split up Joe or Aubry. . .

With Joe less than two feet away. Absurdly close. How did Ron not notice him? He was in his line of sight.

Joe, Aubry, and Aurora are panicking. Aubry goes on an anxious idol hunt.

We get a series of flashbacks to Aubry’s idol hunts in both seasons. Winning and finding an idol are the two things she hasn’t done.

Aubry cries when finding the idol. At least the idol hunt was shorter this week in contrast to last week.

And thanks to going to three tribes next week, we have another idol hunt to go.

I am a vegetarian. Wendy has the worst logic. She admits to being a hypocrite and the chickens she eats at home are “mass-produced”. As in, the chickens aren’t treated right in factories and are fine to eat rather than these chickens which are being treated pretty damn good.

Wendy has a full ankle brace. She had better luck than Bi.

Julie refuses to give up the tribal idol. She armwrestles Probst.

Three tribe members are in a boat. Four are tethered to the boat and must do their best Aaron Reisenberger impression to pull the boat to a tower. At the tower, tribe members will leap off to grab a key. They’ll use the three keys to open a chest. Inside the chest are puzzle pieces to a ship’s wheel. Assemble the wheel and immunity is theirs.

Kama is sitting out Victoria and Julie.

PROBST: Even with a bad ankle, Wendy is very good in the water…I am pointing this out because she is the most entertaining character we have this season!

It’s a dead heat all the way through. Manu’s lead is about 30 seconds to a minute. It’s really just going to be the puzzle to determine the outcome. Aubry is the only person on the two tribes who has done the ship’s wheel before.

David and Wentworth are both on the puzzle as Lauren has to take the lead on it. It gets them nowhere as Aubry, Julia, and Ron DESTROY Manu on this challenge.

Aubry is DETERMINED to raise that flag.

Both challenges were fine this week. Kama wins their third straight tribal immunity. Yeahhhh, production will want to split them into three tribes of five next week.

David’s spidey sense is telling him the focus is on Wendy so much that it is the perfect opportunity to blindside Wentworth.

Wendy praises her own performance and assumes she is gone.

WENTWORTH: Don’t do this to me y’all.

Drew isn’t on the beach, right?

They note Wendy took off.

DAVID: No, that’d be crazy if she took it.

Everybody theorizes Wendy -could- have taken it. They ask David and Devin to interrogate Wendy about the flint.

Wendy actually did take the flint. She deflects and says Chris was the last one to have it.

David is loving Wendy as a smokescreen–or lack thereof.

Everyone buys Wendy’s denials. She is a good liar. If people believe she didn’t take the flint while she has proven to be crazy, just imagine when it comes to voting people out.

David warns Chris to keep the Wentworth blindside plan to them, Wendy, and Rick. It’s a 4 vs. 3 vote.

Chris insists to David that Wardog will be in, but David says “it will all blow apart if you tell him and Wentworth won’t go home.”

Chris doesn’t heed David’s warning and goes to Wardog for the second round in a row to go after Wentworth. Wardog says it has to be Wendy, but Chris wants options open.

Wardog has an epiphany and says Chris should be the vote. The Wardog keeps the war between Wendy and Wentworth going. How fitting.

Wardog approaches Rick to eliminate Chris. Rick laughs because it was his idea to eliminate Wentworth, but Chris is viewed as the ringleader. It’s the classic Blame Joel While Gervase Is Free bit.

Rick and David are now the swing votes as Wendy is no longer a smokescreen. Wentworth and Chris are the only two options on the table.

Wendy has been a vegetarian for eight days and doesn’t learn anything about what goes on in the tribe until at Tribal Council.

David says it is about taking out the biggest social threat. Wentworth and Wardog both freak out a bit.

Chris votes Wentworth; Wentworth votes Chris. It has been a while since somebody received a vote for three TCs in a row.

Nobody is playing an idol.

Once again he shoots straight for the path. He pulls off the most unenthusiastic Cartman-esque “screw you guys” I have heard in my life.

Except he isn’t going home because he grabbed a torch.

Next Time on Survivor: You can fly the coop, but you can’t escape a twist. Two tribes to three tribes.

Please let all four returnees end up on the same tribe so it is Fans vs. Favorites vs. More Fans.

Chris may be the single most boring Survivor contestant we have ever seen. This was the perfect time for him to go home.

Wendy is literally carrying this season on her back. It isn’t a coincidence she matched the entire Kama tribe in confessional count.

Next episode will mark the first time ever that eighteen contestants are still in the game. I assume nobody raises the white flag as it isn’t teased at all for next week.

I saw this elsewhere online, but it is an extremely good point: The current audience is so obsessed with idols that finding an idol is now a story arc. Yes, finding a random stick in the jungle is now part of a character’s story. Yikes.

After the premiere people thought the returnees would all be going home early based on edit. Given we are about to divide into three tribes until merge, there is a very good chance all four returnees are at least making merge. The only returnee I could see going beforehand at this point is Wentworth. No way Aubry gets blindsided with an idol in a group of five since she was at the same TC as JT in Game Changers, a tribe of five will be too scared to dump Joe, and David is positioned very well socially.

The person who will hate this swap the most will be Victoria. If she gets swapped onto a tribe with a Manu or two, and either Joe/Aubry/Aurora, she will be ousted so fast. Hell, I could see a challenge being thrown. Why else is a newbie on a tribe with three tribal immunity wins getting a significant amount of airtime?

Speaking of airtime, Julia has been shut out of three episodes. If her tribe doesn’t go to Tribal Council next week, I could see it being four. That’s the reality of when we have eighteen people spread across FOUR camps.

Overall, this season isn’t in hate-watch territory but it definitely isn’t in love-watch. We’re on a path to a very static and unmemorable season. Who knows, maybe the Edge of Extinction camp will be more entertaining to watch than any of the three tribes next week. Reem losing her mind could provide plenty of dark comedy.