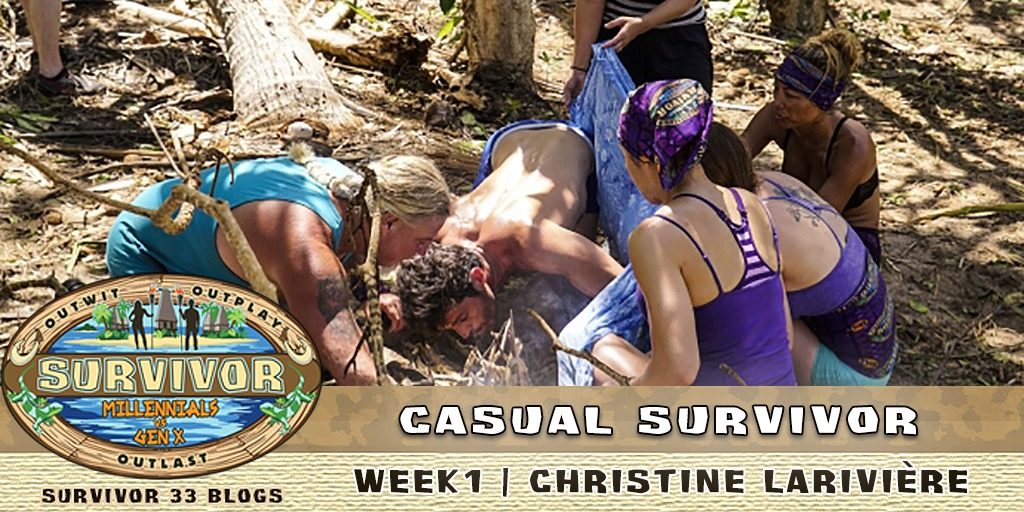 Welcome back to Casual Survivor, the blog in which I touch upon the viewpoints of comment writers, who fall into stereotypical groups, and then offer my own commentary. I love reading people’s comments as much as listening to podcasts or reading blogs because the numerous ways that people can interpret the same television episode via their personal experience, expertise, or lack of full attention add another dimension to my viewing experience. In fact, the comments left by people who have little to no regard for strategy fascinate me the most and these are the people I deem as casual Survivor fans. I will openly admit that sometimes I cheer for personalities more than good gameplay which makes me a casual Survivor fan.

It may have been more interesting if they cast some Millennials who were married with children to diversify that tribe, but the stereotype of living with one’s parents and consciously deciding to do what one loves are pretty bourgeois ideals of this generation. I chose Michaela as my winner because she seems to be that Millennial who will obliterate the stereotype since she has paid off her student loans quickly and has had to work for things. Judging from Michaela’s reaction to Cece’s comment when Jeff asked the Gen Xers what they thought of Millennials,  she is not really into this theme– or much at all.

While the Millennials were shown swimming rather than building a shelter, the Gen Xers built a shelter only to have a natural disaster destroy it. Nevertheless, they persevered and built it again. It was eerily symbolic of how people lost their entire retirement accounts and had to start again. Maybe that is why the older members of Gen X have a grudge against people who don’t work hard.

With regard to the members of the tribe, Ken seems the most likely to get along with the Millennials, and he pleasantly surprised me, because I expected him to offer his off-the-grid advice and then fail to make fire. Okay, fine. I prejudged Ken from his preseason interview and expected him to be a vacuous model. There is still room for that to happen, but Ken came across as grounded. Rachel also seemed like a candidate for a Gen Xer who could get along with the younger tribe, although she is in her late thirties. Alas, she never got the chance and all we were shown was her attempt at joking with Paul and her lack of scrambling.

In my preseason predictions, Millennials vs Gen X Bloggers Roundtable Preview, I thought Rachel might struggle early on but overcome her obstacles. Little did I know she would volunteer to do the puzzle.  As Semhar can attest, volunteering in a first challenge is often the kiss of death—that and too much spoken word and being seen as Ozzy’s snuggle companion and having a body that is mesmerizing but not hypnotizing.

I expected Paul and Sunday to be early boots that people would find irritating. As it turns out, they were annoyed by Rachel. This cost me a point for who makes the merge as well as a first boot point. It’s Week 1 and I have lost two points which means, like Michele, I am bad at first impressions, at least those made in isolation of the tribe in a “Meet the Cast” video.

One of the themes this week, as Michel Trudeau pointed out in his blog, Michel Trudeau: Short-Term Gain or Long-Term Advantage? , was long-term vs. short-term choices. Another was first impressions. According to a psychological study conducted by Daniela Schiller of NYU, meeting people stimulates the same part of the brain that involves assigning prices to items. People literally assess your value, and accordingly, the best way to make a positive first impression is to give people a reason to trust you.

On the Millennial tribe, Jessica, Taylor, and Justin were shown together more than with others which did not make a good impression on Hannah and Mari. On Gen X, Cece and Rachel were shown to be on the outs, yet we were not shown why, whereas David initially bonded and then his paranoia drove his allies, Chris and Bret, away.

First impressions from casual viewers after this first episode were underwhelming. What happens on the show and in the comments section are sometimes completely disparate entities. In fact, most of the comments I read barely addressed any particular player except that there was a clear split between those who love David and those who loathe him.  Originally, I was going to write about catty comments from the cat ladies (many of whom are men), but there was little talk about players other than drooling over Rachel’s photos.

Without further ado, let’s look at some of the comments about the premiere. Twenty contestants, thirty-nine days, hundreds of tangential comments… This is Casual Survivor…

Archetype: Dog in This Fight

There was so much griping from ardent fans who hate the themes each season. Isn’t it similar to Nicaragua or Worlds Apart? It’s South Pacific 2.0. It will be over at the swap anyways. It probably won’t because there is a stark contrast between the two tribes’ mentalities. The only way to make it stop is to deliver Paul’s food rewards by drone or make the Millennials hike for theirs. Among casual viewers, the Millennials despised the portrayal of their generation. Do you know who loves the theme? Casual Gen X fans. Both generations have a dog in this fight and I expect to hear more positive and negative commentary on the theme throughout the season.

Some of the standout comments following Rachel’s swan song episode, most of which had nothing to do with the show or her, were:

Why can’t Canadians apply for Survivor?

Last time I checked, Canada is not a U.S. territory.

I’m not impressed with the way Millennials were portrayed.

Who cares? Seriously, I had to hear about how hard my father’s generation worked. It’s a rite of passage. If you are in your twenties and rely on your parents to bail you out, then deal with it. If you don’t, then why do you have a chip on your shoulder? Gen X was described as the generation that moved back in with their parents. People who started college in the 1980s came of age during the “Me Decade”, which occurred in the 1970s. If Millennials live with their parents and take constant selfies, then they are just an evolved form of a Gen Xer.

Why do Millennials think that things should always be the way they want them to be? These are not really the stereotypes that harm people or hold them back; they’re ridiculous oversimplifications that should be laughable. In my “research” ventures regarding generational stereotypes. I came across a plethora of fluffy op eds. There are so many whiny articles written by Millennials stating why they should not be underestimated. Aren’t there larger issues in the world to care about? We all need to move on.

Survivor’s great. Why isn’t The Amazing Race on?

He was a racist and likely a killer. Sorry. Wrong thread.

I found this gem after scanning through comments that mostly complained about how Millennials are stereotyped. This whining about generalizations is exactly why participation trophies keep getting brought up. Incidentally, Gen Xers did not get milk delivered by drone…It came in a milk truck. How old is Paul really? Maybe I was spoiled in my youth, but we had milk delivery.

Usually, I write something very sarcastic regarding contestants, but after listening to Rachel’s RHAP exit interview, I felt that she is a woman who gets prejudged fairly quickly and I don’t want to kick someone when she is already down. She seemed excited, energetic, and she indicated that she likes to be naked on her intro video, however, she was not shown playing up that last aspect of herself on the footage I saw.

Some people have to be on the outs, and Rachel does not have children, is not an alpha male, and she has the enthusiasm of a much younger person. The odds were not good for her, but the social dynamics definitely led to her marginalization. They do for someone each season. Given her backstory of losing two sisters in horrible circumstances– in the same year if I’m not mistaken– it touched me when she said something along the lines of she’d like to repair and make amends. Something that tragic probably changes the way you want to leave things with others forever. See… I do have a heart!

I fully understand why Rachel lost the game. Ken’s low spot on the totem pole I also get, given his age. And then there is Cece. We were not shown anything to indicate she is not socially accepted by the group. She and Lucy were with David when the walking stick was presented to him and she seemed to be getting along just fine with Lucy. As far as I’m concerned, Cece’s votes were likely strategic to split votes. Cece looked genuinely hurt and I hope one of her self-proclaimed multiple personalities rears its head to shake things up. Cydney never delivered on Storm so I am depending on Cece.

What was interesting about the comments left this week was overwhelming support for one generation. Which tribe do most of the casuals seem vocal about supporting? The Gen Xers.  Most of the Millennials were vocal about disliking their stereotype but not vocal about who they liked on the tribe. The Gen Xers seemed high on Sunday, Paul, Chris and Bret and there were mixed reviews on David. Congratulations, casual Millennials, you are the new Gen Xers, disillusioned and pessimistic. I loved many people on the Millennial tribe and no one could find something positive to say? Then again, how many Millennials posted comments where I read?

Hopefully, next week, we’ll get to know more about the contestants to the point where casual viewers will comment on them. I anticipated love for Zeke, commentary on the Triforce and love for Mari, but to no avail. The comments did not make a great first impression, but there’s always next week!