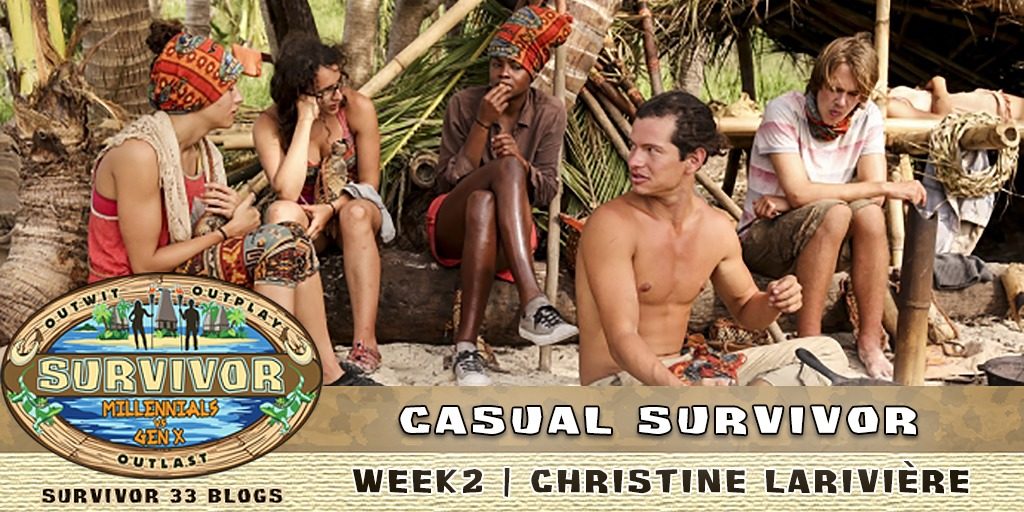 My sincere apologies. There were some technical difficulties, but they seem to be sorted now. Next week, I will be in Dubai so I may not post or I will post on Monday night. Look forward to a Sarah Freeman post on Tuesday or late Wednesday.

Welcome back to Casual Survivor, the blog in which we get a glimpse into a particular style of commenter about the latest episode of Survivor. This week, unlike last week, there were many views expressed about various players ranging from adoration to disgust given the “hook up” of Figgy and Taylor, who really only kissed on camera when they thought no one was looking. This love affair arrives on the heels of the breaking news a week earlier.

Where were you when you found out the devastating news ?

I was at work and I found out nearly a week later. I know—why wouldn’t I know about something that affects my life so deeply sooner? Luckily for me, I watched Survivor about an hour after learning of this tragedy and all hope was restored. This season, we have two females who intend to flirt to go far, Figgy and Michelle, and two males looking for such ladies in Jay and Tails. I really thought Jessica (Figgy) would gravitate to Justin (Jay) who seems strategic; he’d be the Boston Rob to her Amber, or the Timberlake to her Biels, and together they’d be Jiggy.

Imagine my surprise when we were granted the gift of Figgy and Tails, or as I call them Fails, who magically swooped in to prove that love isn’t dead– it’s just in a strategic coma. He’s more of the Eddie to her Hope, so I hope Figgy is okay with serving drinks at a dog bar or that she will somehow emerge as an Amanda or Parvati from Tails’ ashes. Maybe Taylor or Figgy will suddenly become a mastermind. One has to wonder why Jay chose them for his threesome. Okay, now that I’ve read that back, I know what the Triforce is: Jay likes to surround himself with attractive goats. He’s the goat whisperer and he definitely found one in Taylor so far.

While my dreams of everyone chanting “Gettin’Jiggy Wit It” are over, Fails should be epic but their shenanigans and lust for the million should also end tragically like Nikki and Paulo before them– or Brangelina. Already, they’ve defied Survivor rule #26: Thou shalt be neither a mack daddy nor a daddy mack and rule #27: If thou dost get put on blast, thou shalt not get into a cat fight, especially if thy opponent hast a machete.

As much as they are trying to follow rule #1: Remember Boston Rob before all others and emulate his gameplay, they may have chosen the wrong season, but we can’t blame them when there are four versions! This might end well for Figgy if Jay turns into Lex and Michelle pulls a Kathy.

The world is still reeling from the loss of Brangelina (and the very romantic way Brad left his wife for her), but over on the Millennials tribe, Michaela reminds us about hygiene and how nasty it is to make out on Survivor. She reminds us why love should stay dead. Michaela paints a huge target on Figgy’s back who is part of a couple, and amazingly, we learn from Mari and Hannah that the tribe thinks Figgy is a mastermind when the only scheming we’ve seen from her is how to cast a love spell on Taylor. She has equally been hypnotized by his blue eyes. Jay seems a bit jealous that his goat, Tails, might now become a universal goat, and Taylor no longer seems special. He’s ditching bowling night to be with that woman. This week was like a soap opera for the Millennials tribe. Tune in next week for Hannah vs. Zadam.

While the strategic snags to successfully pulling off a showmance were not brought up in the casual comments this week except to say it does not work, Figgy and Taylor  were a central theme. Fans were especially harsh in their comments about Figgy. There were quite a few comments lamenting the loss of Mari as well, one even said she would have gone far if they let her stay. She was voted off second for that reason!

Most of the comments this week were catty (at the time I checked) but they were not left by the cat ladies, but rather people of all genders, races, and ages. “Love is dead” has turned from sorrow to contempt quickly.

Michaela was not alone in her disdain for Figgy and Tails’ romantic adventures. The gloves are off with the first comment.

I hate Figgy’s b**** face. She went on Survivor to find a man. Please! She said she wanted to win the million and find a man. It worked for Amber. She’s better off upgrading to someone with more strategic thinking, though. Perhaps she’ll ditch Taylor for a better placement in the game once she realizes she’ll be a snowboarding widow or have to vie with Jay for his attention. Ken’s bright blue eyes might work as a substitute.

Figgy’s stupidity is the reason I don’t watch. Then how do you know she made a stupid move? How do people who don’t watch comment on a show? It happens with Mr. Robot discussions. People loved Season 1 but stopped watching Season 2 yet they comment on Season 2 and know every “stupid” thing that happened!

What’s a secret scene? Why didn’t I see it on the show? Sigh. If we tell you, we’d have to kill you. It’s a secret.

Humans bred in dirty states before Figgy and Taylor. True. The Summer of Love produced many Gen Xers and nasty people have needs too. Maybe they’re high on pheromones, not sugar cane. It still does not invalidate Michaela’s statement, but at least Figgy and Taylor have one supporter out there. Love is not dead!

All the Millennials care about is love while the Gen Xers want the money. Ken is hot!!! Sheesh! Two people were kissing not the whole tribe. Did this person miss the amazing maneuvers by Michelle and Jay? Not to mention, most of the Gen Xers are married except for Ken, Cece, David, and Bret, who is the only gay male on that tribe. Love is unlikely for that bunch. Ken IS hot!

Is this The Bachelor in Paradise? #TeamGenX  No. A torch gets snuffed and there is no rose ceremony. Figgy and Taylor should not be hated for being beautiful or falling in love. They should be chastised for having no strategy beyond planning where to kiss.

I feel like I’m in high school again and I have to watch the popular kids succeed once more. They aren’t even attractive. Judging from the comment, she herself is still in high school. I really do not see lines drawn on the Millennials tribe except that someone has to go home. It’s not as if no one will speak to Zeke or Adam again. Technically, Hannah was the most popular person last week as everyone was wooing her for her vote. All of the Millennials are quite attractive in their own ways. Who doesn’t love Zeke’s Magnum PI look?

The Millennials ruined the show! It was a great episode. Join the guy who stopped watching.

In other comments, the Canadians were whining again– this time about not having access to videos on the CBS site. Canadians are not American, and when overseas, they obnoxiously wear maple leaves just in case someone mistakes their accent, so now they want to count as Americans.

I am American, and just because I live abroad, I have no access. Is that fair? Yes. The site doesn’t check passports just IP addresses. Get over it. Canadians and Australians can pay for access at least. Do Canadian channels give free access to Americans? If they do then I apologize profusely and bow to their generosity. If you are reading, Laura, I still have the maple leaf magnet on my refrigerator just in case you visit.

Finally from our very own RHAP commenter,Trent C: Overall the Tribal Council itself seemed like a giant stereotype featuring some of the more broad claims against Millennials. Taylor and Figs’ love affair aside, Tribal Council was bizarre. It was as if a teacher asked a question in class and rather than answer it, everyone wanted to show how cool and aloof they were. Jay and Hannah both gave answers that wisely dodged the question. In early seasons, Jeff would insist that players cooperate, yet Jeff actually allowed side conversation to develop a few times and he never stopped it or pressed players for answers. He should have just handed out snacks to everyone and joined the party. He gave Michaela and Figgy lots of room to defend their positions, but he never addressed perceived threats in a way that got answers.

Like Trent, I felt it was stereotypical of the very image Millennials eschew on social media. It reminded me of the debate in Clueless where the teacher is at a loss for words after hearing their deep thoughts. Last week, the Millennials looked great, but I have to wonder now. Everyone is talking about Michelle’s great power moves, but she showed her hand. Zeke and Adam are mature enough to launch a counterstrike using the ridiculous Figgy/Michaela fight and highlighting how manipulative Michelle is. It was great TV, but this may be enough ammunition to cause that alliance to implode and all it takes is an idol if they can’t get Hannah back. Michelle held Figgy’s hand during the vote and showed everyone who her true ally is. I’m sure that sat well with Michaela, Adam, Zeke and Will. Surely they do not believe that Michelle will target Figgy next. Are they that gullible?

To be fair to Miss Figgy, she really let Michaela off the hook. She was well within her rights to take Michaela’s machete remark as a veiled threat. Sure, Michaela meant it as a joke, but Figgy was not laughing and it came after Michaela made a big deal out of their kissing. I get people thinking it’s gross, but kissing is a huge deal in 2016? They did not realize anyone was awake so it was not intended as PDA.

On another season, someone may have made a big deal out of the machete joke. (Think Lindsey vs. Trish). Getting loud and joking about a machete being aimed at someone are two different things. To be clear, I think Figgy handled herself well, but I fully expect her to launch an attack based on the aggression behind Michaela’s joke now that Tribal is over. Their alliance doesn’t necessarily need Michaela’s vote this week and it was not a bright thing for Michaela to say given her knowledge of her position on the tribe. Zeke and Adam may use Michaela, but in the long-run, she’s like a bull in the china shop, not very subtle and too moralistic. She’s also my pick for the winner and she’s great television.

What were your thoughts on Michelle’s strategy? Was it as incredible as others think, or was she too obvious that she is indeed calling the shots? Let me know in the comments below. If I use it, I will take your permission as I did with Trent.