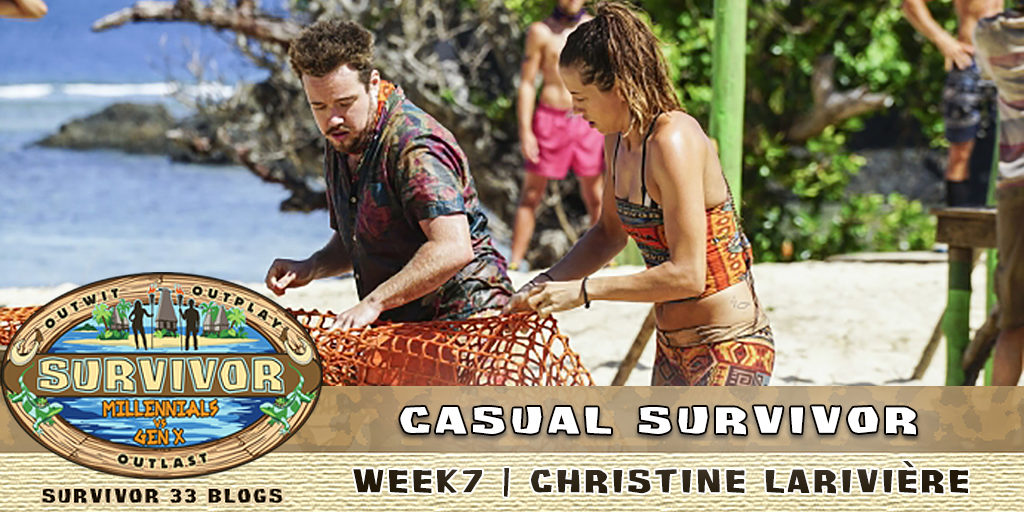 Welcome back to Casual Survivor, the blog in which less than popular views are celebrated. If not for our unsung heroes, the casuals, our favorite show would not be on the air.

Time in a Bottle

Last week  I was terribly distraught about the loss of half of Figtails. The casuals were absolutely vicious calling Figgy all sorts of names and I could not bear to write. Figgy may not have been a strategist but neither was Parvati 1.0, Candice 1.0, Kelley Wentworth 1.0, and the list goes on.

Just a note: Ken, the man who hates nicknames, wrote down “Figaroo” instead of writing her rightful name, “Figgy”, yet Figgy never wrote “Ken Doll”. That’s two counts of hypocrisy for Ken. Perhaps he will run for office as a few casuals wished he would become president. This is what’s wrong with the world–the lack of ability to differentiate between liking someone and thinking he’s a good candidate. I’ll leave it there.

I will miss Figgy, though. I imagine if fate kept her and Taylor together they’d be off at a ski resort dancing away like these two hipsters.

Now that I’m more collected, this week’s episode was superb! Adam’s apology was straight out of Bizarro World or a mirror image of how Michael Scott would apologize. It makes one wonder what Taylor must have been thinking as Adam spoke. Exploring Tayl’s thought process is a scary thought, but this week, Taylor has shown us that he is the Boston Rob of the pair, the genius of the love pair.

And think he does! Maybe Taylor will pitch an electoral system for the jury twist to Jeff at his next Tribal Council. Imagine a world where Chris gets an extra vote, Jay has a superidol, Michelle has a Medallion of Power, Ken is voted off the jury, and Jessica has a Legacy Advantage. You can open your eyes now. Jeff has been trying to instate an electoral system through “twists” for some time now, but like Taylor, the hardcore fans do not care for these twists. Casuals are quite another story.

Now that I think of it, perhaps Taylor came on Survivor to be able to win by popular vote since he’s anti-electoral. That would be so Millennial of him, because in the history of the US, no one has ever brought up problems with the electoral vote and the Bush-Gore election never took place. I guess Fiji is no place for Noam Chomsky or Michael Parenti. Sigh. That scene served as a reminder that elections are around the corner…tonight in fact…and Jeff wants an electoral college so his favorites can win. Russell would have won by a landslide if Shambo and John Fincher’s votes were heavily weighted like those of Texas and California.

Bret, You’ve Got It Going On

I was happy to see more Bret this week. His facial expressions at Tribal were priceless and his look of incredulity as Hannah grilled him about his job was hilarious. Bret’s pre-season interviews spoke about having good instincts when someone is lying and he was caught in a lie.

I hope to see more of Bret next episode. He and Hannah would make an amazing pair who annoy each other. Did anyone catch Hannah’s flip to a Boston accent when mulling over her vote? “I wanted to go fahrthehr with you.” That was subtle but very funny.

Like Adam’s Michael Scott impression, we are clearly on the other side of the mirror. The casuals were more objective than the hardcore fans this week. While the RHAP community among many others is enamored with Michaela, my view is that Jay made a rational decision. She was a huge threat, not part of Jay’s alliance and we knew she’d rat him out. Given how she handled Figgy’s departure with little regard for Taylor, Jay made the right move. She was a powder keg ready to go off. Sure, her exit press was good but she’s not in the heat of the moment now. Her temper flares easily in competition and I’d imagine it’s stressful to others. I noticed that Bret repeatedly went out of his way to praise her which raised a red flag—she needs her ego stroked. Anyone who seriously compares herself to Steve Jobs or Michael Jordan is as delusional as Coach or Ozzy. She is the female Ozzy except she’s not bringing in the food.

It is fascinating to me that when we like a player, we blind ourselves to their shortcomings. (I love Vince by the way). Michaela was an aggressive player. She publicly shamed Figgy (There was no need to call it out that way), screamed at Hannah, shoved David, yelled at Jay, yelled at Bret, smacked a tree, and expected Bret and Sunday to go down without a fight. When she was sitting pretty, she expressed how Bret and Sunday should not take things personally, then she goes berserk moments later when she was blindsided. That is Classic Ozzy, yet hardcore fans are giving her a pass. No one said Ozzy was caught up in a competitive spirit and he was actually friends with Parvati. This week, the casuals seemed the more rational, analytical bunch. I am sad that my pick for winner is out because Michaela had potential, and when she was not aggressive, she was entertaining.

This week, the casuals were split. Many loved Michaela and equally another group saw her as a threat to win, arrogant, a bully (at least they’re consistent in their definition and not hypocrites), and showing her cards too soon.

I guess what she said to Jeff before the votes were read only applied to voting others out. She didn’t live by her own words a few moments later. I agree with that. Her comments to Bret and Sunday rang insincere after her shock.

Next week is the merge!

They’re all going to lose because Michaela was the backbone of their tribe that helped them win. Post-merge starts individual comps. Seriously, I hope this is a troll!

Now Hannah will get revenge! Hannah is not exactly a power player and Hannah was loosely aligned with Michaela.

I hope she gets fan favorite! Fan favorite? When was the last vote…Rupert? Russell? Jane?

Why do people want to take out threats? Then all that’s left are weak players. It’s not outwit, outlast, outplay when the weak vote off the strong! Indeed, very little outwitting takes place. People need to win a million dollars whichever way possible. Most contestants are not Woo and do not want to challenge the stronger players.

If she were a guy, they would have worshiped her– she’d win. Ozzy never won. Colby never won. Terry Dietz never won. What am I missing?

She should have played like the writer. David? I would have liked to have seen the interaction between Michaela and David just for the entertainment.

I take back what I said to the hardcore fans among us. The casuals’ views may be fair and balanced, but they are off the wall nonetheless. Jay’s move was barely mentioned when I checked the comments, but Ken and David still get love.

Lately, the whole Millennial tribe reminds me of the hosts on Westworld. They’ve really bought into this theme and are just running on script at this point. They turn on each other, then wake up the next day singing “Kumbaya” like nothing ever happened. From that perspective, Michaela, like a more vocal Dolores who is programmed to respond truthfully to Dr. Jeff, started to awaken at Tribal. Up until that point, Michaela went through her loop of being a challenge beast, yelling at someone, and living happily with Jay, her Man in Black who would just smile at her. Then she’d wake up from being shot and relive her three-day loop again.

At this Tribal, though, Michaela just realized that the human guests, the Gen Xers, can actually think and find ending her life entertaining. As she let out a “What?” whirling around to Jay correctly thinking he was the cause, she suddenly fainted as Jay, Will, Bret and Sunday’s faces turn to skulls and Mari and Figgy’s souls came back from the dead courtesy of our funeral director. Then she woke up in Losers’ Lodge.

That’s what happens when Survivor airs on the second day of Día de  Muertes, but Michaela can have shots of mexcal and some cigarettes with the rest of the dead souls now. Sadly, her loop will now consist of watching Figgy make out with Paul awaiting the next challenge. She had to go after Figgy did; Figgy is part of her story.

We never saw the interaction between our Man in Black and Bret and Sunday. Something tells me Bret along with Sunday tried to sway Jay, not the other way around, and the scene we saw was after that happened. It is possible that Jay came up with the idea, but something must have spurred that. Either we are missing a scene that speaks negatively of Michaela because people were really overselling how much they liked her or Jay did just have an epiphany. Will warned Jay that Michaela knew about the idol, and all I could think was that Will does too. I predict a Jay blindside by Will…Stop laughing.

Our Man in Black can play with the hosts or the humans. While others see Jay’s game having few options, I think he will be fine. Jay has Taylor, Will and Michelle. David has said he’ll flip on the Gen Xers and work with Millennials to Taylor, and Zeke and Jay seem to have a bond albeit Jay-Zeke is weak. If they bring in Adam, they have three idols. It’s unlikely but I’d love to see a battle of the idols.

Which player do you think will win? I like Jay, but think Michelle and Sunday could make it far with all of these men battling for the alpha spot. Overall, I like this cast and look forward to an exciting merge.

The blog is pretty short this week, but life has been busy in every facet. Last week, we had two special features as well, so I really did not have much time to write. Hopefully, next week things will slow down.

If any of you would like to write a special feature in the off-season or wish there was a blog on some topic, pitch your idea below. Maybe we can make it happen.