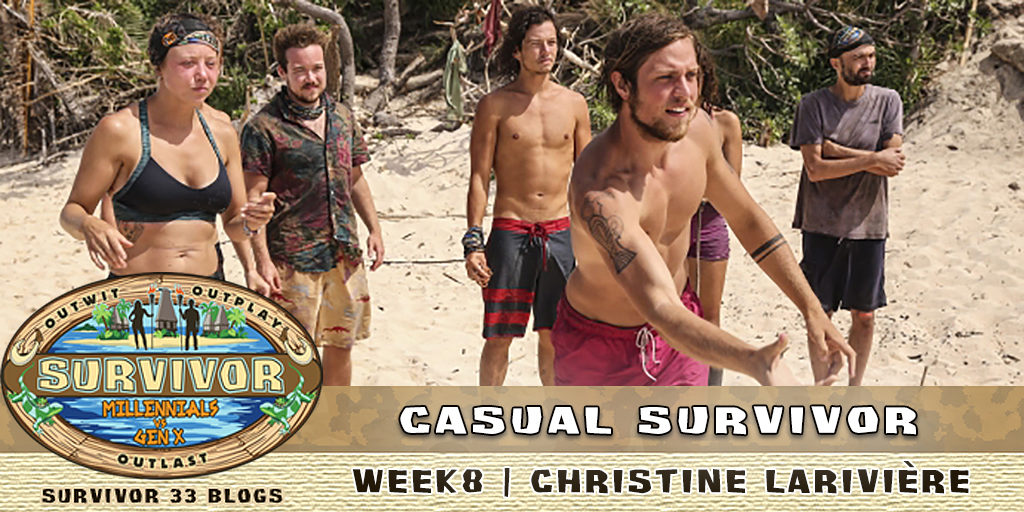 Welcome back to Casual Survivor, the blog in which I write about whatever pops into my head. We made it to the merge! I don’t know about you, but I am so happy that there is not a clear winner. For me, it makes viewing exciting. I like the cast, so I am looking forward to see how things unfold.

The Boys Are Back in Town

I was so happy that Jay’s dream came true! Earlier in the season, Jay had a confessional in which he made an analogy to bowling night being ruined because his friend was hanging out with his woman. With Figgy gone, it looks as if they enjoyed bowling with coconuts. Maybe it was bocce ball, but they can cherish that moment forever!

Many people thought Jay’s move to vote out Michaela was bad, but she had a different agenda and it would have been short-lived. What was bad was Jay’s lack of trying to solidify his relationship with Bret. Once Jay saw Bret hanging out with Chris non-stop and Jessica with Sunday, he should have used his fingers to count. Four into thirteen equals out. Did he originally think he had Zeke, Adam, and Hannah even though he seemed to spend very little time with them? Once he decided to target Adam, who was supposed to be voting with him–Bret and Sunday? Did he think they were splitting the votes? That still makes it 5-4-4. I’d really like to know what transpired and where his head was at. I look forward to seeing the introductory recap next week.

Please Allow Me to Introduce Myself

No doubt about it, this was Taylor’s episode. The editors seem to have gone out of their way to throw us curveball episodes featuring a player who does not go home. Last week, we had a Bret spike and this entire episode read like a dating site video for Taylor.

I’m a good listener. People confide in me. I am a fan of the Survivor revenge and blindsiding Adam.

I own my flaws at Tribal and I love to laugh. Why take life seriously? Rock on!

Something about mason jars remind me of serial killers. (Maybe it’s from American Horror Story: Murder House). It was such a random thing for Taylor to say as he was stealing food, yet he claims it was not because he was hungry. Perhaps it was an offering to appease the powers that be as part of a ritual to make it this far in the game. One thing is for certain, Taylor is a goat and that should put Jay or Will in the cross-hairs if Taylor does not annoy too much.

Adam did the unthinkable. He attempted dialectic discourse with Taylor, but did all of the talking instead, which is not surprising because no one expects Taylor to follow.  At least that is what it appeared to be. I’ll need to paraphrase.

Starting with the antithesis, Adam screamed out that Taylor is angry that Adam voted out Figgy. Adam acknowledged that, stated he understands that, and is sorry for that– giving us the thesis. Taylor says nothing but looks eager to hear more, but he sees a moth, has an epiphany, or is possessed by something.

Adam builds his argument by saying he knows that Jay has an army and that Will is, in fact, Jay’s right hand man. Adam assumes that Taylor felt hurt and wants to be Jay’s number one and synthesizes the two ideas for Taylor: Taylor must vote out Will so Adam can help Taylor be Jay’s number one, thereby proving he is sorry, and Taylor will forgive Adam and do the Happy Dance with him like Charlie Brown and Snoopy.

That was truly amazing and I respect Adam’s philosophical endeavors– even if it really is not dialectical and more of a strange deductive process– because Taylor has a one track mind.

This, however, is what Taylor heard from the entire monologue: Adam voted Figgy out; Adam’s a witch; there was a second shooter on the grassy knoll; and Adam wants to target Will and Jay. And Taylor was right about three of his conclusions!

Sure, some might say Taylor is a hedonist but Ken claimed that title in the pre-season interviews. I guess Ken’s a neo-hedonist wherein “please” and “thank you” up the pleasure factor for him. Please, do what thou wilt. Thank you.

Taylor, however, cannot fathom a construct of a wheel in which he is not at the hub. When Jeff asks others if they were hungry and they confirm that, Taylor cannot register that information and laughs it off because they are not he; they are illusions in his delusional world, the one in which he wins Survivor. They could have eaten but they chose not to for the greater good which had absolutely no impact on Taylor’s solipsistic views in which Taylor cannot see it as altruistic: Carpe banana chips ergo they’re dumb, especially Adam because he voted off Figgy. Taylor is being set up in the villain role with Adam as his victim, so I expect great things for Adam.

While many people have lauded Jay including Jay himself and me, Taylor’s strategic mind has been ignored. Taylor actually played it right during his conversation with Adam. He appeared to actively listen until distracted and then diabolically reiterated: “What if we vote off Will?” Sure, it was in the form of a question because he lost the script, but he let Adam state everything and then played it as if it was their idea later in the episode. Interestingly enough, Taylor claimed that somehow their idea leaked as if to throw Jay under the bus and acted innocent with Adam, all while scratching his beard as if thoughts were running through his mind.

With Jay, Taylor swore him to secrecy and then told Will in order to light the fire under him. Chaos Taylor has arrived. Taylor put the wheels in motion to vote out Adam, yet Adam will think Will did that. He also firmly established himself as a goat by stealing the food thereby perhaps lengthening his stay in the game when he knew he was clearly on the bottom. It seems that Will or Jay will be next, but Taylor has a strategy to target Adam. Granted, if Taylor were to tell me that Adam could steal my reward, I’d likely retort: “Oh, like the way you stole our food?” We can’t say he is Fabio anymore. He’s Phillip Sheppard, NaOnka and Andrew Savage all rolled into one—annoying, hoarding, and spiteful.

Twenty contestants, thirty-nine days, an army of three, one cannibal…This is Casual Survivor…

The casuals were miffed that blindsiding Taylor or Jay was wasted on Michelle as if the Gen-Xers cannot regroup again and then proceed to blindside them. I get the sentiment, but I read some strange conversations which gained popularity because someone compared Jay to some One Direction guy.

Archetype: I Don’t Actually Know What a Blindside Is 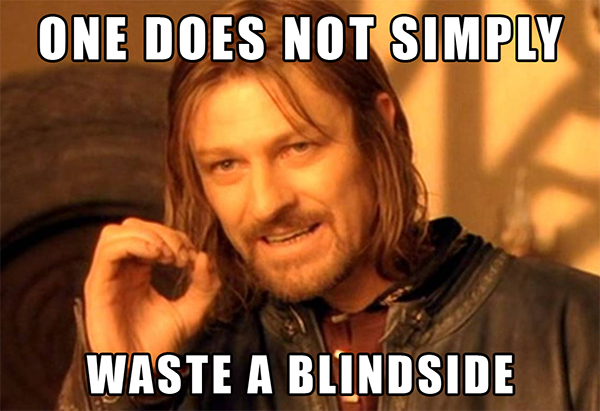 Why did they waste a blindside on Michelle? They could have taken out Harry Styles or Taylor. After googling him, I must admit Jay does have similar hair.

They were worried about an idol being played for Taylor or Jay. As was clearly stated on the show.

Still, Harry is the ringleader and needs to go.  Taylor is the perfect goat to take to the end and Jay would have saved himself.

How do you waste a blindside? They aren’t in limited quantity. Exactly!

Such a technicality! Not really. I was wondering the same thing.

Happy Taylor didn’t go but they wasted a blindside. What is it with wasting blindsides?

They wasted a blindside on Michelle. She was a goat. Taylor stole food and should have been blindsided. It’s not cool and he just sat there stupidly at Tribal. Taylor is the ultimate goat! Michelle had gameplay at least. I was hoping she’d sway the guys to vote out a Gen-Xer.

I’m so upset that Taylor stole food and did not go home. He doesn’t believe in hard work. Obviously, a Gen-Xer. Hard work is not the key to Survivor. Ask Rodger Bingham, Butch, Rupert, and the other hard workers whose names we’ve forgotten.

I’d like to wipe that sleazy grin off of Taylor’s face and throat punch him! Easy there, Michaela!

There was really little to mention of Zeke or Hannah who were swing votes along with Adam. For that very reason, I’ll tack on something about them.

We’re a Couple of Misfits

Zeke and Hannah had a great episode. Zeke has really good connections with most of the voting blocs if not all. I expected him to be an early strategic target, but he has surprised me. Zeke is strategic but he has shields all around him. Hannah seemed able to work her way back into his good graces and she’s meshed with David. I can see the three of them going far as the powerhouses battle it out. I hope so!

Something tells me that Zeke, Hannah and Adam may go back to the Millennials and bring over David. Think about it. We have as many Gen-Xers as Millennials now. It is not in Zeke’s interest to keep Gen-X strong, but he’ll have to swing over a bloc or at least David to do so.

Zeke is in a great place as is Bret who played his discovery of Taylor’s mischief well. I think Chris will go, but it could be any of the alpha males. In other words, I have no clue and I love it.

Who looks good to you? Which person will be voted out next week?