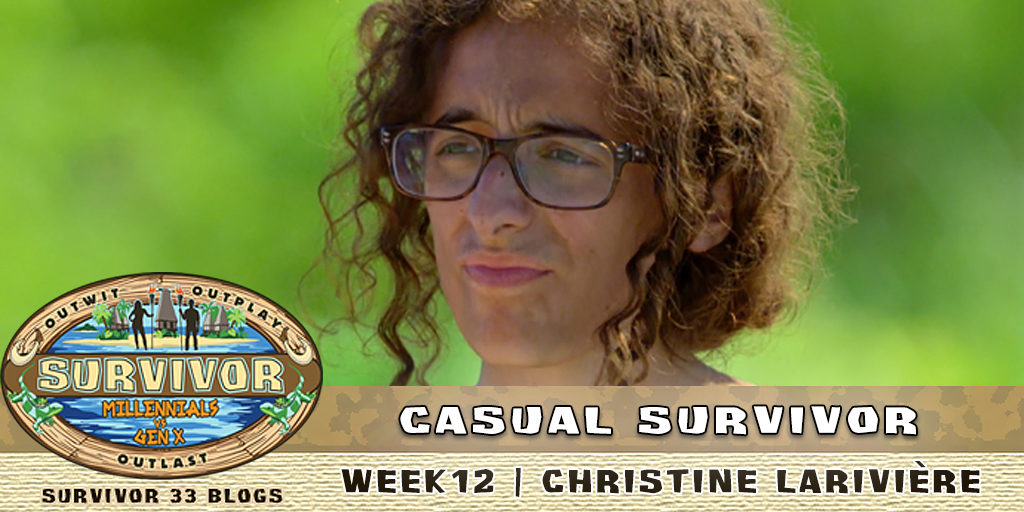 Welcome back to Casual Survivor, the blog in which I decipher the show according to the first thoughts that pop into my head and look at some of the unusual comments left by casual fans.

For a double boot episode, that was fairly exciting only in the sense that our two biggest threats who could have both met their demises are still alive and well. Why? The second tier players decided to choreograph some dazzling moves to gain recognition, yet little do they know, they are down two goats with fewer options. I learned that there are  actual support groups for those who were traumatized by goats. There is hope for Hannah and her agerozoophobia.

There is no disputing that Adam is a great guy. His gameplay leaves something to be desired, however. While most analysts were raking Adam over the coals for not taking out David or Jay because they are big threats, as a casual voyeur, I’d like to propose something slightly different.

I love to watch Survivor because it is a small slice of society. As such, it offers insight into character flaws that lead to downfalls tragic or comedic or otherwise. In Adam’s case, his character is that of a meta superfan. If I were prone to talking to television screens then I might find myself telling Adam to predict the players moves and not focus on what the fans expect. In other words: Start playing chess based on what the pieces on the board can do for you and counter based on your opponent’s mindset rather than trying to reconstruct scenarios from other games, Adam. Easier said than done when Jeff Probst screams buzzwords and they begin to dance in your head because you are tired and hungry.

In the last episode, Adam was on the right track targeting David, but he wasn’t adamant about it. Then something we did not see happened: Adam revisited Witch Logic and deduced that Will was a bigger threat. Was it faulty logic again? If so, I blame Adam’s eighth grade geometry teacher for not teaching deductive proofs. Was it his insane quest to take out Jay’s right-hand man as he previously vowed he would to Taylor? Is that supposed to impress Taylor on the jury, dissolving Jay’s “army”?

My theory is that Will “make a big move for the résumé” Wahl put a thought in Adam’s head: What is my big move? Will, like everyone who gets their first lousy job, bragged to anyone who would listen that Adam wasted his idol and that Will made a big move. Heck, the superfan in Adam could hear the “Previously on Survivor” segment laughing at him throughout the jungle. This thought set roots and grew in Adam’s mind until one thought resounded: My big move will be to take out the guy who said I wasted an idol and that he made a big move. That and Bret brought it up. Who doesn’t listen to Bret Logic?

The Pit and the Pendulum Theory

Will tragically like Michelle, Taylor, and Zeke before him showed his full hand. Experience: Alliance Flipper Who Pledges Allegiance to His Trust Cluster. Bret, our funeral director cum policeman, was on the case with his own form of Witch Logic: Will is a kid who studies and checks things off a list; ergo, he must go. Bret probably reconstructed Will’s list three sheets to the wind which included: abstained from alcohol, made a “big move”, and was the pretty girl at the prom. It’s clear now why Will was the target rather than Jay the Friend of the Entire Jury Who Has Saved Himself Multiple Times and Looks Cooler Than Cool or David the Underdog Who Is Loyal and Won Two Huge Showdowns. Compared to the Belle of the Ball, what big moves have those two accumulated?

Will calibrated the pendulum incorrectly and it took him out.

The saga of Witch Logic continued, and like a virus, spread to Hannah.

Hannah, in an effort to stake her claim, shared her logic: I am a goat, but Sunday is a bigger goat; therefore, she must go. That is how many analysts broke down her logic, but she too is meta. Hannah did not like that Sunday whispered in her ear at Tribal Council and caused Adam to tell David to play his idol for Ken and not for her. This shook up Hannah’s scripted move–having a player use an idol for her based on her read. Going to rocks caused her alliance to lose Jessica. That netted a strike against Hannah, but more importantly Adam, who believed Sunday’s insane suggestion.

Hannah’s version of why Sunday must go, stated to the camera, sounded a bit like Dr. Evil explaining why we don’t get it. It’s more fun if your enemies have to hear your master plan before you kill them off. In Sunday’s case, she was spared unless Adam brought up the sharks with lasers when telling her to vote for Jay. Why Sunday you ask? Because she’d explain the plan to Jay, which is why he played the idol, and she was where the lasers were aimed by Hannah. Hannah and Adam needed to hide the evidence of their blunder… by putting her on the jury. Meanwhile, we’re all asking: What the heck kind of logic was that, Hannah? You want to be the pretty goat at the prom?

Moral of the story: Hannah is the goat, but she made big moves to be that goat. Paradoxical, huh? That is true Macbethian Witch Logic.

Sunday seems to think she was not a goat and she has a point. She caused David to play his idol for Ken resulting in her having to pick a rock rather than Hannah which led to Jessica’s demise. She also flipped on Jessica, only for Lucy to go home. Sunday was not a goat; she was a Judas goat leading poor unsuspecting sheep to their slaughter. Maybe Hannah stopped being a sheep and wanted to free the flock from their pied piper.

I’ll miss Sunday. I was sure she’d get no votes and shade galore from Jessica!

Twenty contestants, thirty-nine days, a trust cluster headache, and more “big moves” than we can handle…This is Casual Survivor…

With Will and Sunday gone, we are down to our Final Six, baby!

The casuals were out in full force and many expressed liking this season, which is good for us because that is what keeps the show on the air. Also, fans of the show were shown respect, which means the trend of having many contestants who love or grew up with Survivor rather than recruits should continue.

Why did they bring up Bret lying about his job when it isn’t part of the game? Good question.

This season is the worst! They don’t show surviving, just crying. I wanted to see what happened with that storm. Read in Ken’s voice.

I’ll skip the bizarre Adam hate (as if he’s playing up his mom’s illness). There are some really hostile people out there. They even turned on Jay for sharing his story about his mom’s illness.

Hannah has masterminded many of the votes. She is playing a great game!

Judge for yourself. Mickey is playing the tambourine.

Yes, I know Mickey usually drums and sings, but if I have to show you a Monkees video, then I prefer the one Axl Rose stole his crabwalk moves from. How do you not love the tie in the guitar?

Ken can’t play, and he’s not even good looking!

I love the players this season. They backstab, but they’re good people.

I hate every survivor left. Boot them all and start again! Fire casting, perhaps?

David the underdog needs to win.

Yay, Hannah! Just Jay, David, and Adam to go! I love this one!

Wouldn’t it be cool if the Legacy Advantage gave Ken a million dollars? Not really.

That vote with the sun symbol and day should not count. It was a spoiled vote. Her name is Sunday Burquest. We need a rule that contestants’ full names be written. I was going to make a political comment about voting, but I’ll behave myself.

There is love for most contestants except Bret. I love Bret! The thought of him at the Rodney Bowl makes me cheer him on more. Boston vs New York (or vice versa) would be a great season!

Many of the casuals specifically wanted a Ken, Jay, and Adam final three. I’d be fine with any combination, but I will be loyal to my pick of Jay even though Bret’s big move of targeting the kid who does his homework, Hannah’s move of taking out Sunday, and Adam’s move of taking the target off of David were impressive.

I will stick to my decision of a Jay victory, but I’d love to see a Bret or Hannah victory. I predict a victory by Adam, but I will be happy with whoever wins and thoroughly loved this season.

Who are your Final Three?

I sincerely wish all of you and your families a happy holiday season! I hope to write between seasons and would be happy to consider publishing your special feature column. Pitch me an idea! I’m on Twitter, @ChristineLar3.

Thanks for reading and commenting! I may not have a large readership, but I certainly have a fun group.

To see the bloggers’ predictions, check out Jury Jeopardy!