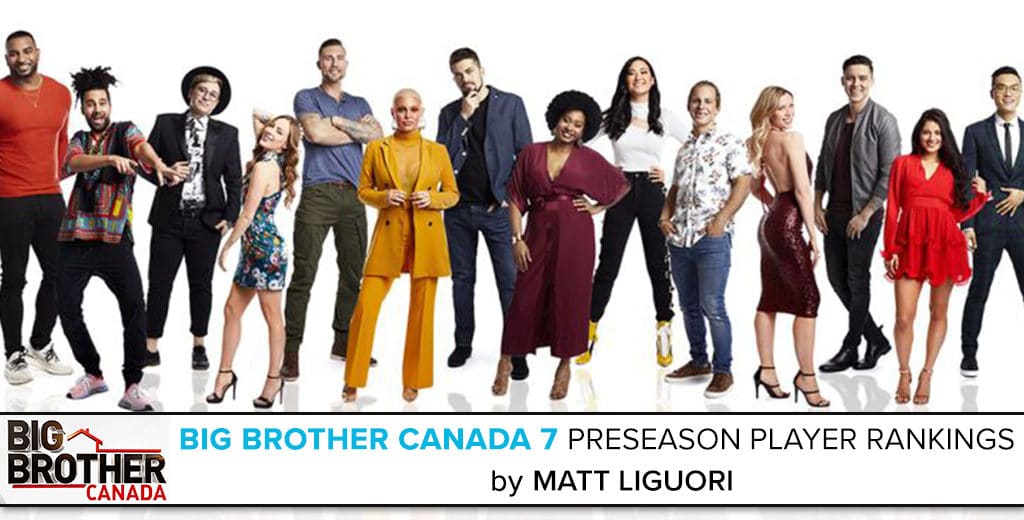 Matt Liguori analyzes the cast of Big Brother Canada 7 by ranking the players in the RHAP Big Brother Player Rankings.

Hey guys! If you’ve checked out any of the Power Rankings blog over the past few Big Brother seasons, you know that usually I’ll go through and rank the players every week of the season. Long story short, that is not the plan/schedule for this season, but I still plan to do some occasional rankings (whether it be the traditional way or in the 3-2-1 format I use over on the Survivor blog… still haven’t totally figured it out).

For now, I’ve looked over the recently released Big Brother Canada 7 cast and below have my rankings of the 14 all-new players! This looks like a really fun group and since this show has legitimately never had a bad cast, I’m as excited as always to see what kind of entertainment and gameplay they’re sure to deliver.

I’m not too sure when the next blog will happen, but I’m sure it won’t be too far from now. Thoughts, comments, agreements, disagreements? Leave a comment below and/or let me know on Twitter, @mattliguori!

Terms that come to mind while watching Chelsea’s videos include: calm, reasonable, normal, and level-headed. Chelsea is going to be one of the season’s best players if she lives up to the potential I’m convinced she has. She seems like somebody that can be friendly enough with everybody in the house. I don’t get drama vibes or out-to-win-every-comp vibes… she’s going to go far and as a big fan of the show, I’m hoping she knows how the end game works enough to study all season long and potentially win the whole thing. Plus… she’s on #TeamCat and that’s huge in the Big Brother Canada world.

Kiera comes off as really intelligent and someone who could be a big gamer. I think she’ll be very entertaining and outspoken… probably the closest this cast has to a Kaela. Kiera won’t have a hard time finding a person or group to work with. If she picks her partner(s) wisely, she could follow the same path as Kaela, blended in with the house majority in the early game, then kick it up several notches once jury starts and make some moves to take out players who could give her a run for her money in the later part of the game.

It’s hard to hide in the Big Brother house when you’re a big guy. Anthony doesn’t come off as having a very big personality which is great for his potential as a game player. He seems to really have his head on straight. He’s not entering the game with any kind of massive game plan, rather opting to go with the flow and see how things develop naturally. If Anthony is as mellow as he appears, he should blend in just fine with whatever alliance he joins and maybe even link up with a final two partner along the way. My only issue is he seems like a more casual fan of the show and on Big Brother Canada, sometimes you need that superfan card to bring you the most success possible… but I’m betting on him picking things up as he goes.

Samantha has the capabilities to be a big time gamer, but also the potential to be an over-player. She doesn’t strike me as somebody who will be able to hide how threatening she can be, but sometimes the threatening players end up going much farther than they should if there’s a house full of explosive players and/or big social threats (which this season has plenty of both). I wouldn’t necessarily be surprised to see Samatha out pre-jury, but she’s smart and should be able to hold her own in comps.

It’s never a good sign when someone says they know they should throw competitions but don’t think they’ll be able to. You have got to know when you don’t need to win, and then follow through and let other people win competitions you don’t need. Damien gives me some Zach Oleynik vibes from BBCAN3. He’s a quiet guy who could either get with the right alliance and go far, or team up with the bros and show his threat level with a bunch of comp wins… I’m leaning more towards Damien being around for a while.

Laura is a big personality but not in a way that I think she’ll be at the top of anyone’s radar. In terms of competition prowess, she thinks she’ll fall somewhere in the middle. I think the same probably goes for her abilities as a game player. She’ll be good… not the best, not the worst (which can sometimes bring you all the way to the end). Laura is my leading candidate to finish in the highly coveted role of Big Brother Canada fourth place robbed g.oddess, following Will Kenny from last season.

My worry about Stef involves her being one of the youngest houseguests (23, along with Kiera) of the season. I think there’s a lot of value in playing the little sister role, but it’s intimidating being the baby of the house especially if you’re not a big personality… which is the vibe I’m getting here. She’s smart and very sweet, but I don’t see the killer instinct most (if not all) Big Brother Canada winners have had.

It’s so exciting to have Kyra here on this cast. The more representation we can get across all reality TV the better, and I think Kyra will open a lot of eyes while in the house. As far as gameplay goes, I’m not so sure they have what it takes to do well. I’m worried that Kyra will be so likable that their threat level goes through the roof. If Kyra can link up with some of the strategic girls on the top half of these rankings rather than the bros on the bottom, I see no reason why they can’t at least make jury.

Dane’s natural social abilities will lead the way for him to last a while. He seems like someone who will link up with the bros early on but find a way to survive while all his allies get evicted, possibly playing his way into an underdog role. Dane needs to be careful in the early game because if the other players realize how threatening his likability is, he could find himself in major trouble. Dane shouldn’t struggle to make the jury, but he’ll probably go out soon after similar to an Arlie or Bobby.

I LOVE Eddie. He’s adorable and he’s going to win over the hearts of every single houseguest. I may be underestimating him with such a low ranking here, but I don’t see him driving any strategy in the house or managing his social threat level well enough to survive. I’m thinking with so many aggressive gamers in the house, Eddie may be able to slip by unnoticed for a while, but you can’t let someone this likable anywhere near a jury vote.

I’m not sure Maki knows where he is. His natural charisma will keep his houseguests laughing but I’m not sure that’ll be enough. A guy with a unique personality like Maki is someone you tend to not be so threatened by. He won’t be beasting through the early comps or be much of a strategist, so getting to jury shouldn’t be too tough. When it comes down to it I’m thinking the real gamers in the house will outmaneuver him.

Adam doesn’t have an ounce of finesse. He says he’s been a fan of the show for years, but his plan of reforming The Brigade in 2019 leaves me wondering how much he’s paid attention to the evolution of Big Brother gameplay. Adam seems like the kind of guy who won’t be worried about laying low early on. He’ll win any comps he’s able to and the target on his back will grow bigger and bigger until eventually someone takes him down. I just don’t get the vibe this guy is very adaptable. The Devinbro/Ginja Ninja potential is strong here.

I feel like Mark thinks he’s hilarious… but nobody will be laughing with him. Mark is going to want his input in on every plan made each week, and eventually that’ll rub people the wrong way. I’m sure he’ll get into an alliance early on, but once that group inevitably blows up by the second week Mark will be out in front as someone they’re looking to get rid of. The only thing worse than the multi-step plan Mark is bringing with him into the house is knowing that he isn’t going to follow ANY of this plan whatsoever. “I haven’t thought of a scenario where I go out of the house early” … famous last words, my friend.

Until Big Brother Canada gives me a reason to believe otherwise, I’m not sure I’ll ever have confidence in the one older houseguest being any kind of threat to win the game. When there’s one houseguest about 10 years older than everyone else, they have a super hard time fitting in and getting anyone to feel like they’re equals in the game. Karen made a deep run on BBCAN5 but she was such a unicorn, and ultimately didn’t get the win anyways. Kailyn plans on lying about her personal life and I’m not sure why, but that also doesn’t fill me with much hope.