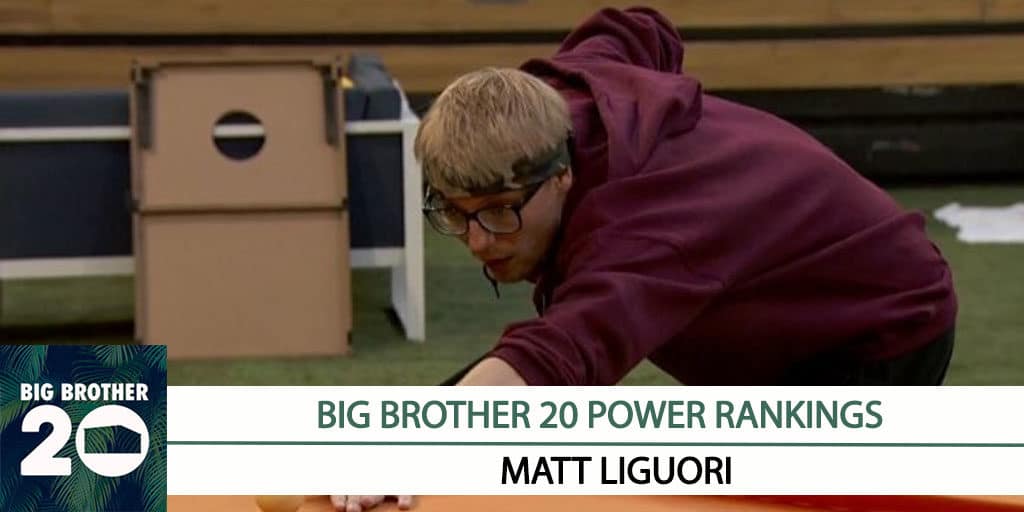 Matt Liguori ranks the houseguests each week (usually) with a new guest in RHAP’s Big Brother 20 Power Rankings. This week Matt is…. alone!

Unfortunately I’m coming at you guys alone again this week, but I’m here nonetheless! Drop me some feedback on Twitter, @mattliguori, or leave a comment below!

I’ll maintain that I’m not worried about Tyler when it comes to his game not being seen by the rest of the house. The only reason half of them may not see it yet is because he and his alliance are doing such a successful job at hiding it. If he makes it to final 2, the second he starts explaining his moves and the pieces all come together, I do think the jury will be impressed. But it’s still early, and Tyler will need to somehow continue being perceived as a non-threat despite winning almost every damn competition.

If it acts like Dr. Will, plays like Dr. Will, and flirts like Dr. Will…….. I’m just saying. Brett’s game has been on the rise ever since Winston left and that showmance target was taken off of his back. Having spent the past two weeks playing Haleigh and the Foutte side for information to run back to his actual alliance, Brett has been killing it. His cards will be shown this week after the vote, but if we’re talking about Haleigh…. she can’t stay mad at him.

It’s not normal to see somebody so comfortable with going up on the block (especially when they’d already taken themselves down in the same week…) but Kaycee was up for the task. There was strategic intent behind the move to leave Kaycee up instead of Angela (that Sam vote is so hard to get these days), so it remains to be seen if it’ll pay off. Kaycee should be fine this week and then fade right back into the background in a couple of days. It’s one of those rare cases where someone is sitting on the block and still sitting in my top 3.

There’s been more attention on JC this week than any week prior. Scottie, Haleigh, and Rockstar are all keeping an eye on him, but the Fessy protection has kept them from pushing harder on the matter. His social game is strong; he’s really one of the most beloved people in there. The buzz seems to be “JC would be a great double eviction target” which means they know he has to go, but want to rip the bandaid off really quick. So he’s in a good spot if nobody is going to touch him until a potential double.

Angela’s got about zero relationships with the other side of the house. She’ll have some fake game talks with them when it’s convenient for her but unlike Tyler or Kaycee, she never attempts to connect with any of them… which is why they’re all going to continue taking shots at her. For now, she’s got some strong allies and has nothing to worry about this week thanks to Tyler. With the hacker power no longer in play, she could run out of room to hide if an HoH falls into the wrong hands.

Fessy still seems to have the smallest target on his quickly fading side of the house. However, even if he isn’t the biggest target, he probably won’t be able to avoid the block if Level 4 comes into power. Going into next week, Haleigh can’t compete and Rockstar will be gone, so Fessy needs to either win that HoH himself, or pray for a Scottie/JC win.

If you were ranking these players on your own and wanted to rank Scottie in spot #1, 3, 4, 8, or 9, I’d understand. (Well maybe not as high as 1..). His game is very hard to track. Scottie has way too many people talking about targeting him next week, including the people he made a new alliance with last week. Remember when he outed “The Hive” to Level 4, and now he’s kind of back in with them? It’s messy, but there are ways he can come out on top.

This poor girl has been having quite the summer. She’s not dumb, she’s not blind, she’s not giving up…. she is just straight up getting played by people who are better at Big Brother than she is. A lot of that has to do with her allies being extraordinarily weaker than the other side of the house, mentally. Haleigh’s running out of time and space to turn things around, but I’m cautiously optimistic that without Rockstar weighing her down, she may be able to hold on just a little bit longer.

I’m really not going to be able to take another month and change of Sam complaining about everyone playing the game and how badly she wants out. I pray she’s out in the next few weeks because otherwise the end game will just be about “who can bring Sam to the end?” I mean… imagine Sam giving a final 2 speech. She’d straight up say “_______ played better than me, I don’t deserve the money but thank you.” While Sam’s spot in the house isn’t in jeopardy, these are power rankings and she’s got no power in this game whatsoever.

Rockstar’s game was bound to catch up with her eventually. I said last week that I felt she was on the rise because when is Level 6 going to get two Foutte members up and decide that Rockstar was the bigger threat? Never. But there was a hole in that logic thanks to the hacker twist; a week where that side can only put one Foutte member up and it makes sense to target the weakest one, Rockstar has been put in immense danger. Rockstar’s lack of relationship with anyone outside of her alliance is sending her home this week, in addition to her consistently poor attempts at making deals or talking game (which she hadn’t done at all prior to this).