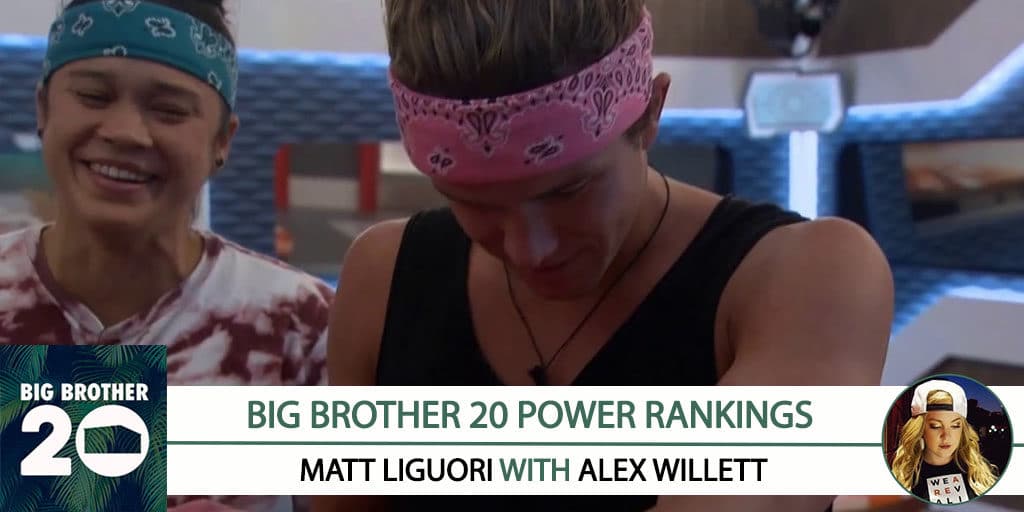 Matt Liguori ranks the houseguests each week with a new guest in RHAP’s Big Brother 20 Power Rankings. This week Matt is joined by Big Brother: Over the Top houseguest, Alex Willett!

It’s not a complete season of Big Brother power rankings until I’ve brought in one of my favorites, BBOTT’s Alex Willett! With only five houseguests remaining, there’s a lot riding on these next few competitions and final decisions the houseguests will have to make. Will they handle the pressure and pull through triumphantly? Am I making this sound as dramatic as possible? Hopefully, yes. Tweet us your thoughts, @alexshay1  and @mattliguori, let us know what you think and/or leave a comment below! 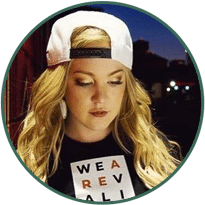 Kaycee should be the #1 target going into this upcoming week. She’s on a 4-week veto winning streak, her social game is killer, and she’s a huge threat to win the final 3 HoH. However, Kaycee has two allies with insane amounts of loyalty to her, and two competitions she could win that would ensure her spot in the final 3. With only three playing in this upcoming HoH, you have to be feeling good about Kaycee getting to the final 3, let alone winning the whole game. If Kaycee wins her way into the final 3, then wins HoH and chooses her final 2 opponent, I have a hard time seeing her lose regardless of who she chooses to sit next to her (yes, even Tyler). But we’ll take it one step at a time.

I might be a little biased but I still firmly believe that Tyler will win this game against anyone but Kaycee. I ALSO believe that he is self-aware enough to know that he is going to have to cut her before the Final 2. (Here’s to hoping he is able to channel his inner Jon Pardy.) Guys, he’s a superfan of the show! He should know what to do. My gut tells me that he is well aware that Kaycee is both a comp beast and a social threat. It’s times like these that I wish we had live DR’s so that we could really get a glimpse into his mind. I feel confident that Angela, JC and Sam would all take him to the Final 2 and that he can and will pull out a win.

The most nerve wracking part of Tyler’s game in this final week isn’t even about whether or not Kaycee or Angela can win a jury vote, it’s finding a way to send the next two players out of the house (Sam and one other) without them feeling extremely sour towards him. Tyler has a final two with Sam, JC, and Kaycee, and has fallen in love with Angela (he guesses..). There’s no getting around the betrayals coming if he wants to get to the end and this guy needs all the jury votes he can get.

She has played the textbook Big Brother game. Kaycee has successfully done what so many others before her have said they would do and have not been able to accomplish. (Lay low the first half of the game, build your social and come out guns blazing with competition wins towards the end half). I don’t have Kaycee ranked first because I don’t think she is strategically strong. I think that Tyler will eventually outsmart her and cut her. I AM MANIFESTING THIS INTO EXISTENCE.

As much as we’d like more information from Tyler about his final 2 plans, I’d also like that information from Angela. We’re heading into a final 4 where she’s unable to compete for HoH, so she’s either got to win the veto or keep pushing the Level 6 idea until the train reaches its final stop. Angela seems like the prime final 2 goat given the remaining options, but I’m not ready to declare her as drawing dead. A lot jurors really don’t like her, but if she’s up against Tyler and the jurors are super bitter towards him…

Our ice queen! I find her DR’s quite dull but I’ve enjoyed watching the game she has played inside the house. Since she isn’t an over-the-top and super extra personality, it’s a unique glimpse into what a relatively normal and levelheaded person would do in the house. Big Brother is, at its core, a social experiment so I kind of like that she’s calm, villainous and “regular” all rolled up into one. It’s interesting to observe. I don’t think she will win the game but I have her ranked third because I think she will find herself in the top 2 as the person who has been dragged to the end.

The remaining life in JC’s game is entirely dependent on Tyler. Of course, JC’s ideal scenario is winning the final 4 HoH, but again.. it’s hard to bet on that when he’s still yet to win a competition. It seems most likely that Tyler will be the one off the block during the final 4 cycle, even if he doesn’t win HoH himself. JC’s life in the game depends on if Tyler is able to take a shot at one of the girls, deciding he wants to keep JC around as an easier beat in the final 3 comps. The guy can win a jury vote, he’s just got to get there.

JC understands the game better, (in my opinion), better than Kaycee and Angela, but he never had a true alliance behind him to pull much off. He’s gotten so far because Tyler was able to successfully use him. I understand he has offended most of us but if I look at him as strictly a game player, I think he has a ton of potential to be a great Big Brother player. I don’t think he will win this season, (even though he was my original pre-season winner pick), but I think he is a great example of a recruit who quickly caught onto the game.

I’m thrilled that Sam’s game is going to end before she could’ve been dragged into the final 3, and theoretically pulled into a final 2 as a goat. Bitter or not, there’s no way this jury would’ve been content crowning Sam as the winner of their season, but luckily we don’t have to worry about that; Sam is heading to the jury house and we can let the remaining houseguests (and production) breathe a little easier. The only interesting thing left to see is what part of each houseguest Sam walks out the front door with…

I have Sam ranked last because I don’t think she is a remotely good Big Brother player and I can sense her time in the house coming to a close. I’m sure she’s a lovely person in real life but she’s the exact opposite of the type of person I like to watch in the Big Brother house. Give me the cut-throat and strategic type, please! Her time in the house should be wrapping up this week.