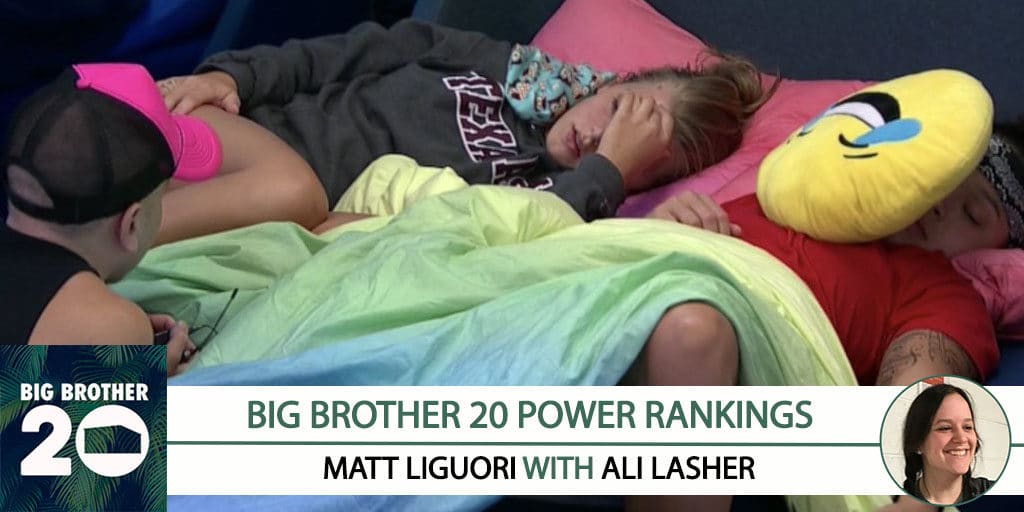 Matt Liguori ranks the houseguests each week with a new guest in RHAP’s Big Brother 20 Power Rankings. This week Matt is joined by RHAP’s own Ali Lasher!

I’ve gone a few weeks without a guest for one reason or another but we’re back on track this week with one of my favorite people, RHAP’s leading lady for all things MTV, Ali Lasher! Things in the house may not have changed a whole lot over the past seven days, but there’s a whole lot to look forward to in these final few weeks of the season and I’m very excited to see how it all plays out. Tweet us your thoughts, @lashtweets and @mattliguori, let us know what you think and/or leave a comment below! 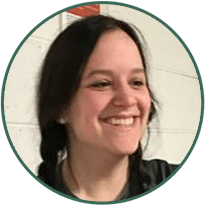 There have been some growing concerns among fans this week (with Scottie’s news of the “jury alliance”) that Tyler may be putting in all of this work for nothing. I understand the concern, but I’m not worried. I think every Hive member has respect for Tyler and his game. Bayleigh and Rockstar specifically told Scottie he needs to go after Tyler when he gets back in, because they know he’s the top dog. Just please remember, Tyler and Paul are not the same player. There’s massive differences in how Paul treated jurors on their way out compared to how Tyler has, and that’s why Tyler will still win the game if he can get to the end. Everybody relax.

All of my opinions are subject to the existence of a somewhat rational (and I use that very loosely) jury. I refuse to believe there’s a reality that exists that doesn’t involve Tyler making it to the end. The only person willing to nominate him did so secretly and is hanging on to her game by a thread. Tyler has racked up final two after final two and never even needed the power app lovingly bestowed on him by the American people. The bottom of his alliance (JC and Sam) are actually least likely to put him up and the rest of Level 6 would more than likely go after JC and Sam when it comes down to it. I’d write more positive things about Tyler’s position in the game, but if you’re reading this you’re likely watching the show and if you’re watching the show it’s close to undebatable.

The best thing that could’ve happened for Brett’s game was when he and Tyler solidified their final 2. As we can easily guess, it’s not too genuine on Tyler’s end… but them reaffirming their trust in one another seems to be enough to keep Tyler from wanting Brett out as early as he once might have. So Brett now has protection from Tyler/Level 6, protection from JC who wants to target the girls, and fro Sam/Haleigh who wouldn’t put Brett on the block with the Tyler/Kaycee/Angela trio still in the house. If Brett can manage to take out someone from Level 6 soon with JC’s help, I don’t think he’d regret it.

Kaycee falls into my number two spot 90% for being the person Tyler would most want to sit next to and 10% for having the athletic ability to win at least one of the final comps. Other than that I have nothing much to say about the lil’ peanut. I hope she had a fun summer? HAGS?

If there’s anyone likely to benefit from the news Scottie brought back from jury this week, it’s Kaycee. Kaycee’s done well socially all season long, leaving her with no enemies thus far. As the game gets more cutthroat with bigger players taking bigger shots, finding a way to the end with no bad blood (or at least significantly less) is sometimes all you need… especially these days.

Brett is my wildcard selection. I would love to see Brett answering questions in a final two. As the game moves forward, I struggle to carve out Brett’s path to the end. I’m hoping he is starting to see that his days are numbered as we get down to the final five. Maybe he will connect with JC, work to convince Tyler to get Angela and Kaycee out and make a run for it. Unfortunately for Brett and for me, to borrow from an emotionless friend, he might be a day late and a dollar short.

With just about everyone in the house catching on to #Tangela, and the last two HoH reigns having been both of theirs, the target on Angela’s back is bigger than it’s ever been. Angela pros… she’s a part of a strong and successful alliance. Angela cons… she doesn’t do a thing to nurture those relationships, which is why someone like Brett might slip from her fingers and help to send her home if he sees the opportunity and takes it. While it seems like there’s resentment towards her from the jury, I still think she’s got potential to go far, especially if her and Tyler and Kaycee keep running the table with these comps.

I find it really odd that Angela and Tyler haven’t made a final two deal. Just wanted to get that out there. That said, I think they would both be willing to cut each other if necessary but Tyler seems more likely to get the opportunity to do so. While Angela has impressed me with her willingness to make big moves and ability to maximize her speeches to justify them, I think her bloodlust and general iciness will catch up to her before the summer is over. I would go as far to say that Angela can’t win the game at this point. How’s that for a hot take, ice queen?

JC’s intentions have become pretty clear. JC wants Tyler and Angela split up. JC wants Kaycee and Angela split up. Long story short, JC wants Angela gone. Angela is cuddled up with JC’s man, she’s a strong player, and she’s got multiple people who have her back and none of that is good for JC’s game. JC has to find a way to break up the party while not having the blood all over his hands, given that would plant a target firmly on his back for the following week. I don’t know that his plans will be successful, but I’m so excited to see what happens.

MY BIG DUMB PUPPET (MASTER)! Ok, that is not entirely true. JC is not dumb, but I think he is playing a bit too hard this week. JC is one of the better strategists this season, but he feels way too confident in his relationship with the members of Level 6. JC’s biggest issue is that he orchestrates moves without getting any credit, both from the people who execute them and from the rest of the house. Even if he gets to the end I think he will be written off as a floater, but I think JC’s meddling will catch up with him before he even has that opportunity.

It remains unclear how much longer Sam has in the house, because with talks from JC and Brett about taking a bigger shot, Sam may continue to skate by. The Level 6 war is coming, but whether or not Sam is a casualty along the way totally depends on who wins HoH in the next week. Angela or Kaycee (or Haleigh… of course) as HoH could mean she’s done for.

Each time I do these rankings, I start by listing the contestants from memory. Every season there is inevitably a houseguest or castaway that I forget to include. This season, that distinction inexplicably goes to Sam. What else is there to say really? Sam is not winning this game. But if Sam is reading this, I’m not making fun of you and you’re definitely not crazy at all. Please don’t hurt me.

I really do appreciate the work Haleigh has put in trying to get closer to Angela and Kaycee, but just as I said last week (and we’ve all been thinking), it’s simply too late. They see right through Haleigh and it’s not going to ever work while Level 6 is in-tact. 75% of the time in any other given season, Haleigh’s tactics to get in good with the majority alliance (after her own alliance has been decimated)… would usually work! But Level 6 is way too tight and way too strong to ever let her in, so there’s nothing left for Haleigh to do except hope JC or Brett decide (on their own) that this coming week is the week to take a big shot.

The fact that Haleigh knows how badly she screwed up this summer kind of takes the fun out of writing this assessment. But still, what a giant disappointment. Haleigh is not long for this game. I think she will squeeze by one more week against Tyler’s better judgement, but I don’t foresee her staying in the game much longer.

Well, it was a fun hour last Thursday night when Scottie came running through the doors and everybody was over the moon excited. Once reality set back in and it was time for another Level 6 HoH reign, Scottie or Haleigh’s fate was sealed. There’s just no way Level 6 can allow either of them to go further in the game while the jury house is filled with all of their friends. So there goes another year’s BattleBust… thanks a lot Kaitlyn!

While I think this is Scottie’s last week in the house, I was impressed with his ability to adapt and try to play up his relationship with Tyler over Haleigh upon reentering. Poor Scottie though. In a world where Fessy isn’t a moron, Brett or a Brett equivalent goes out on Fessy’s HOH. It is hard to believe that Scottie would have been Angela’s target the following week and maybe he gains some room to play. Sure, this was Scottie’s best case scenario but I would have believed this way more than I would have believed you if you told me Fessy would evict Scottie on his HOH. I’m still not over that.