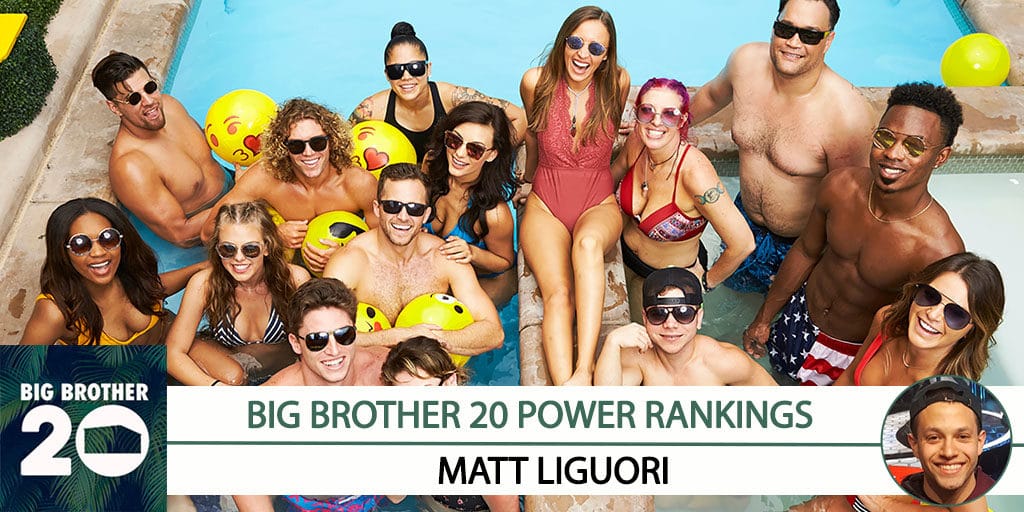 Matt Liguori ranks the houseguests each week (usually) with a new guest in RHAP’s Big Brother 20 Power Rankings. This week Matt is…. alone!

Well for the first time ever, I’m flying solo this week! I ran into a bit of a time crunch and wasn’t able to lock anybody down to jump on here with me. But of course, the show must go on.

I’ve been enjoying this cast a lot so far. I think there’s a lot of potential, despite this first week being relatively slow. (It’s still early and there haven’t been any evictions yet.) Once we start getting people out of the house and the game intensifies, I think the drama and gameplay is bound to increase.

So despite being alone this week, I’ve got my rankings and I’d love to hear where your guys’ line up. Anyone you think I’m too high or low on? Drop me some feedback on Twitter, @mattliguori, or leave a comment below!

Tyler couldn’t have asked for a better role to play this week than HoH. The house has split in two and both sides want him. With a house split and animosity building, shots will likely be fired right over his head next week. Tyler has shown the most game sense of anybody in there and I can’t imagine any outcome besides him going far.

Kaycee is in good with her allies and not standing out as any kind of threat. She’s nowhere near the top of anybody’s target list and seems relatively well-liked. Also, her punishment could’ve been a lot worse, especially considering it’s rarely in effect.

Just like how Kaycee is the safest on her side, Scottie seems the safest on his side. His game is right where he should want it. Steve leaving isn’t great for him because it’s his #1 ally, but it also turns him back into a solo player and I think that helps him way more than Steve ever could.

Rachel may be the most well liked by the other side of the house within her core four of Level 6. If Swaggy’s side wins next week, they’re nominating Winston and Angela and looking for one of those two to go home, which means Rachel should be fine for now.

JC is playing the middle, but he isn’t fooling anybody. Everyone sees his game for exactly what it is, but since he’s in the middle and the perception is that he could be swayed easily, nobody will come after him just yet. Maybe he could just, you know, keep his hands and comments to himself?

I love Haleigh so much. I’ve been very high on her since feeds came on, but the Fessie situation has given me a little pause. If she can keep herself and Fessie in line like she did on Monday night, she’s absolutely somebody to watch out for. She sounds like she’s really got her head in the game.

Brett has been unproblematic so far and I don’t think he deserves the hate I’ve seen coming his way. I think he’s a lot of fun to watch on feeds and isn’t anywhere near as dumb as first impressions would have us believe. Both Brett and Winston would benefit majorly from the other leaving the house. If Winston goes anytime soon, Brett will be sitting pretty.

It was a very close week of Bayleigh. If she ended up on the block, there’s a good chance she would’ve been the one going home. If Level 6 decides next week they want to go after Swaggy C directly, they could easily nominate him next to his best friend/sister/showmance Bayleigh. But Bayleigh’s another smart one, and I think she’s got more up her sleeve than some of us have given her credit for.

This love not-so-triangle can’t be doing Kaitlyn’s game any favors. She’s got a decent amount of numbers on her side, but if they’re not solid because of all the Fessie/Haleigh stuff, the other side will be at an advantage. I think Kaitlyn has been great TV/feeds, but she’s playing with a lot of emotion so far and that’s not leaving me too hopeful on her chances.

Fessie has been laying relatively low so far, but that veto win gives Level 6 plenty of reason to target/nominate him as early as next week. They’re going to want to take out someone on that side who can win comps, and with such a small sample size, Fessie could be in danger.

Winston hasn’t been making a whole lot of friends. His allies are his allies, but the other side would love to see him leave sooner than almost everybody else in Level 6. It’s insane how high we were on Winston preseason just to have his chances at winning this thing just about as promising as JC’s chances of not appearing on TMZ once a week this season.

Rockstar looked great when the feeds came on, especially compared to where I thought she’d be. But the vibes between her and a lot of people in the Level 6 alliance have not been great. They may not bother with her while there are bigger physical threats on her side, but if they do put her up I imagine it won’t be too hard to send her home.

I maintain my love for Swaggy C. But of course, he’s played a little too hard too fast and this showmance is really distracting him from keeping his head on straight. As the “leader” of his alliance, Swaggy is in major trouble if Level 6 wins HoH next week. Swaggy knows too much about the game to go out after only three weeks of playing, so I’m really hoping that doesn’t happen.

So in terms of GAME, Angela kind of reminds me of Olivia from BBCAN6, being such a big target early on for no obvious reason. Everyone came around to love Olivia and she went pretty far, so if Angela is lucky maybe she’ll follow the same path. (I see you all nodding your heads “no”.) Well perhaps she could just be more mindful of what she’s saying, with 24/7 live feeds involved? Not too much to ask, right?

Despite having the power, Sam seems on the outside of the house. Whether or not she goes home, having spent a whole week as a robot instead of forming strong bonds with the big groups is not going to help her. There’s a contingent of people looking to keep her around, so if she does stick around or come back, I think she’ll have room to maneuver and probably skate right on by while both sides fire away at one another.

It’s possible the Summer of Steve may be coming to an end much sooner than he anticipated. I really liked Steve during the preseason, but having seen his game in action, I’m pretty underwhelmed. I think he’s tried hard to blend in and it hasn’t been as casual about it as he may think he’s been. His links to Scottie (and Swaggy’s side as a whole) could definitely save him; but even if he does survive this week…. what’s next?