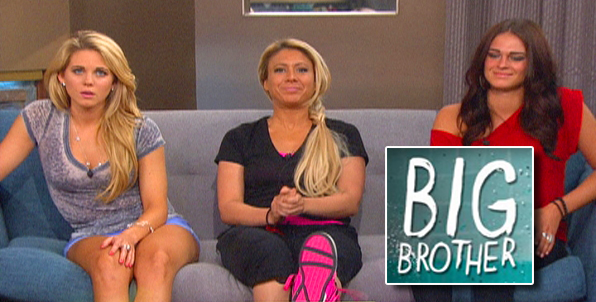 CBS we all know how set up “America is MVP” is to give the viewers the opportunity to destroy Aaryn, but in a shocking turn of events, Aaryn gets re-elected and returns to the HOH room. Poor Julie Chen. Julie looked like she had a hop in her step all night until the ending of that HOH competition. When Aaryn won HOH, Julie looked like Walter Cronkite when he made the JFK assassination announcement.  Julie may come to the next show strapped with enough C4 to take out all of CBS. So Aaryn enters the HOH room with her middle fingers up and pointed towards America. Aaryn’s cabinet for her HOH administration this week  will be the racist mom from Remember the Titans,Draco Malfoy and the rest of the Slytherin house, all of whom were  lined up and nodding in approval.

The past week Aaryn has been trying to change her ways, but old habits die hard, like me only being able to sleep on my stomach knowing it’s bad for the back and my pillow, as I drool beautiful, abstract paintings into my pillow cases every night (A unicorn flying in Candy land last night in case you were wondering, $7.25 on ebay if you want it). Anyway, explored in previous blogs, maybe this isn’t all Aaryns fault. When our mothers were reading Clifford the Big Red Dog or Ramona the Pest, Aaryn’s mom was probably reading herMein Kampf. Regardless, Aaryn in true  Big Brother fashion has gone from the outhouse to the penthouse.


Tell me that she doesn’t sound like every character in that clip! She is getting by though. She will for sure be safe this week unless she gets punched with the MVP again. She really needs to expand her social game past Aaryn at this point. Has she even tried to reach out and talk game with anybody other than Aaryn? I give her a lot of crap but there are moves on the table for Ginamaria to make. She can join with the Howard/Spencer crew at the very least. Let’s see some game play and less awkward fist pumping please Ginamaria!

My prediction is that Aaryn will not be able to follow the agreement she made with Helen and will go hunting for Elissa. If I’m wrong and she does decide to be loyal, then Howard is in big trouble, as is Spencer. I think the real question is who will America decide to vote up with the MVP? Will it be Ginamaria again? It will get very interesting if America votes up Amanda….very interesting… I guess this is what happens when CBS tries to rig the game like Quiz Show. The Big Brother gods are not done with Aaryn yet as the prophecy foretold,  “A blonde demon will rise to power longer then anybody expected”.