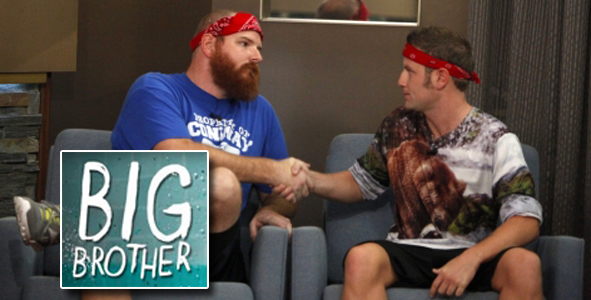 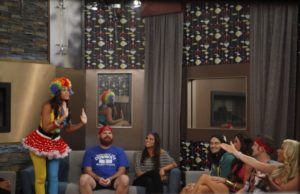 Where is the Jerry Springer security?[/caption]

Welcome to Mayhem! I’m reeling right now, so forgive me if this seems rushed and raw, as I feel like I’m writing The Pelican Brief and will be assassinated at any moment.  In the first half of the show I expected the bald security guy from the Jerry Springer show to show up and carry GinaMarie off the set as Candice was given her speech. Julie Chen looked like she wanted to come through the TV and shank Ginamarie.  I don’t mean to sound sexist, but women are pure evil sometimes. I mean did you see how cold blooded that was when Judd was evicted. Did you see the spirit fingers that Helen pulled out when casting her vote for Judd?  Helen there is no doubt is Satin in a mom’s body, in charge of the house. Helen, like I said in my last blog, is the “Don” of the house. Every eviction has been carefully orchestrated by Helen, no matter who HOH was. When will a shakeup happen? How does nobody in that house see what is happening? Why am I asking so many questions in a row on a blog?  Let’s say hypothetically (possible spoiler!!!!) that Andy has won the HOH for this week, the obvious nominations will be Spencer and either Jessie or Ginamarie. Will this be the week that we can finally expect the unexpected?

Judd …Sweet Judd…RIP.  Here is a sweet, beautiful, poignant song my father taught me as a kid, “ Nuts and bolts…Nuts and bolts,…..You got screwed”….


That could have been Aaryn! Instead, Aaryn looked like she disassociated when she won HOH and then POV, as she let Helen brain wash her, and then made Helen’s power move without getting any blood on Helens hands. Aaryn is a good competitor, but she is horrible at the actual game play, as pointed out by Evil Dick tonight.  If were following Aaryn’s logic, she thinks that she can’t “make any waves”. She thinks that by doing what Helen wanted and putting up Judd that she is now safer. I would argue that no matter what Aaryn did, she would still be at the bottom of whatever that alliance is calling itself. Her status in the game would have been much better if she would have joined up with Judd, as she would not have been on the bottom of whatever alliance that would have become. With Andy as HOH she may be safe for this week, but since she has showed that she can win competitions, it’s less likely that she will be dragged to the end of the game as now she is more of a threat.
Aaryn is dumb in that she doesn’t see the dynamics in the house; Ginamarie is dumb in a way that makes Snookie from the Jersey Shore look like Maya Angelou. Ginamarie does not deserve to be on this show. I love Big Brother, so I’m really disappointed at the casting directors that put her on this show, because at least the other despicable houseguests this season understand the game. Ginamarie has no understanding of anything that is happening around her. The only appealing thing about her will be when she gets off the show and acts like Glenn Close in Fatal Attraction towards Nick. I hope Spencer wins HOH and the house then unites to vote Ginamarie off the show.

It sucks, but I see another predicable week. I see Spencer and Jessie going on the block, with Ginamarie as the understudy. Julie Chen hinted that there might be a houseguest who gets to come back into the house or something of that ilk. You have to think that CBS is tired of the current power in the house and so let’s cross are fingers that they do something shady and unfair, like introducing a twist that changes the dynamics in the house.