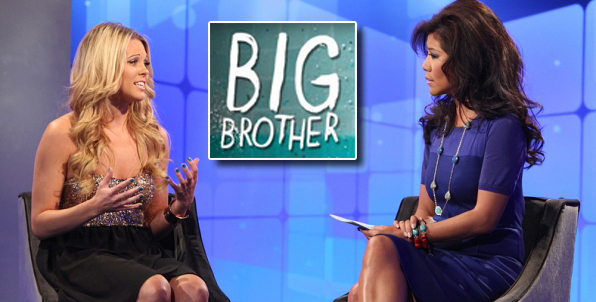 What a fun little night. Aaryn takes her first steps towards being eviscerated by the public. Julie Chen gunning for the prime time Emmy award was on her game tonight. She held it together pretty well, as I thought maybe she was going to go, Tom Cruise A Few Good Men on Aaryn and ask her if she ordered the “Code Red” on Private Santiago, with Aaryn screaming back “You can’t handle the truth!” Part of me felt a little sad for Aaryn, because when I was 21/22 years old I did and said a lot of stupid things to, for god sake, one weekend home from college I had a party at my Mom’s house and let one of my friends pick any bottle of wine from the wine collection, which of course led to a $1,200 bottle of wine that was purchased for my little brother, being saved for one of his landmark moments in life down the road,  being pounded down by two blacked out college kids that at that time normally drank the finest Carlos Rossi $2.98 bottle they could buy at Safeway. My point is that Aaryn said some horrible things and will probably be haunted by this for the rest of her life, hopefully she can learn from this and it will help her mature…www.youtube.com/watch?v=v3rhQc666Sg

Another highlight was Julie asking Amanda why she acted like a psychotic, unlikable, bull in the china shop, bully, crazy ass, entitled, up towards Elissa. Julie was basically trying to spell out to Amanda that she has been coming off like someone who is about to fall into the golden geese garbage chute followed up with Oompa loompa’s singing a life lesson song about being an entitled brat. Overall, a big win for CBS, other than its horrendous new cop show previews for this season, which always seem to revolve around a sassy woman that is smoking hot, with a $10,000 wardrobe and a hair stylist, with a deceased father, who was the top cop of his time and to top it off she has the ability to recall in detail every day from her whole life. Seriously why don’t they just give up with these new ideas and bring back Jake and The Fatman or Moonlighting as I would guess all the actors involved from those shows are “available” right now, specially Bruce Willis, since he just got fired from the new Sly Stallone movie, where for five days of work he wanted a million dollars a day! (no joke)

Let’s not get sidetracked though, let’s move on to this upcoming week, which from this point on will be Spoiler-ish.

Kudos to Judd for how he has played the past two weeks, but he also has benefited from Elissa winning HOH and now Ginamarie. Every winner of Big Brother needs some luck on their side at some point, so Judd has caught a lucky break or two, but now he has capitalized on those lucky breaks and hopefully will help Ginamarie push Amanda off the ledge.

So here we are, Amanda and McCrae on trial for their war crimes this season. The odds at the Reno Hilton  are 2/1 that Amanda gets nominated, has a mental breakdown and….oh wait I have a clip of the live feeds, I guess Amanda was just told she is going up on the  block this week, let’s see how she is taking it: www.youtube.com/watch?v=bSxuXQCEC7M