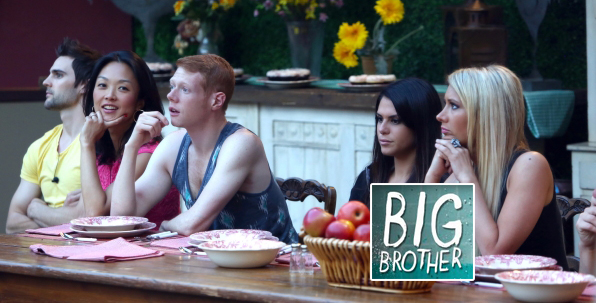 Poor Julie Chen. She looks like she’s going to snap and just come clean. “Look, America,” she will say to the camera, “you and I know we made a huge mistake casting this year, but there is nothing we can do about it now. Still, I promise you that the producers have talked to the cast. We’ve promised them that if they don’t get their act together and stop offending every race, gender, and sexuality in this country, the next competition will be reenacting the Russian roulette scene from Deer Hunter.”

McCrae taking Candice off the block. Yes, it’s wimpy but also savvy. It takes the heat off him and looks like he is aligning with the majority of the house. Clearly a Pizza Hut delivery move, as everybody knows a Dominos deliveryman would have F’d that up! He is playing soft. Now that he is done as HOH, will The Moving Company continue to stay loyal to him, or will he be the Matt Hoffman Brigade, AKA the first one the alliance turns on? Actually, he might be safe as long as Jeremy is still around. Speaking of which: If Jeremy had a ponytail, he would look identical to the evil dad inKindergarten Cop.  He’s even starting to act like him. Man he is tough, though. Did you see the way the way he confronted those girls over the wine? The way he maintained eye contact and didn’t take a step backward? Wow, he is a tough hombre.

Seriously, the way he carries himself is just not good. There is no way he goes far in this game, and he shouldn’t. If you carry yourself like a bully/douchebag, you don’t get to succeed in reality TV—
No, no: The 179 examples of douchebags making it far in reality TV games were all flukes. Flukes! I would think that The Moving Company will continue for the next three weeks, playing along with Jeremy and then turning  on him with a swap of maybe Judd or Andy.
Elsewhere:

• Hi, I’m Helen. I haven’t been shown at all in three episodes, but now I’m going to introduce myself by having a nervous breakdown over the missing bottle of wine. Hi, America! Obviously, Helen is smart. She apparently has worked in the White House. Going from there to this BB house must be like when Marty McFly went from the future back to 1985, only it was the one that Biff wrecked with the sports almanac.

• Amanda made her bed and now she has to sleep in—err, I mean making out with McCrae and doing god knows what else in that poor HOH bed. When Amanda went to cast her vote, I expected her to put up her arms and say “Yes. I slept with the pizza delivery dude. No, I don’t feel good about it. But I’m playing Big Brother and you would do the same thing,” as she flips off America. My guess is the she separates herself from McCrae the first chance she gets this week.

• Spencer: Goes to McCrae to see how he likes the plan to 86 David from the house with a John Wayne Gacy ecstasy look in his eyes. You
know he’s thinking, ” If you mess with this plan you’re going to the bottom of the pool.” The Cameras need to stay on him 24/7. God help us if there is a cellar or basement hiding in that house off camera because the way he looked at McCrae scared me. It’s hard to tell if he is respected or feared by the other players, but I guess at this point, both are good.

• Judd: Not to harp on this issue but the damage that Real World Judd did to the name Judd in reality TV was huge. It made the country look at all Judds as tools. I must admit that Judd is a player. His social game continues to impress and he looks like he is finding narrow spaces to fit in with other players. Judd and Andy could make a good duo in this game. Both are good at fitting in but doing it in a natural way, which is lost on the majority of this year’s cast. If Judd can avoid the block this coming week, he will be in a good position moving forward.

• Andy: Continues to look like a rich man’s floater. In a house full of historically dumb BB players, Andy is Albert Einstein.

• Kaitlin/Jessie: Are debating how many cheesy hashtags they could make on their Facebook pages, even though hashtaging should only be used on Twitter but has carried over for some godawful reason. Both of these girls should get comfortable with the terms “pawn” and “nominee.” Historically, these types of players either make it far in the game or are be forgotten soon.

• R.I.P. David: You will be missed. But Billy Joel said, Only the good die young. Would it have killed CBS to do a slow montage of David during his brief stay. Maybe to Rod Stewart’s “Forever Young.” In poker, a player who doesn’t know how to play is called “dead money.” David was dead money. I wish him well as he goes back to his mom’s basement with his bong and Sour Patch Kids. “The Ride is over, Bodie”—I mean, David. At least he can say he met a beautiful, sweet woman. Oh, wait… he can’t, because he met an offensive, racially intolerant, unlikeable, entitled girl. It was sad to watch him hint to Julie Chen that Aaryn was the special girl he has been looking for his whole life. Aaryn is the prime example of why Hot girls being exposed to 24/7 exposure is risky. They get treated their whole lives like royalty, everything is given to them, and the worse part is that they start to believe they are funny when there not and so you have Aaryn who probably has had people her whole life over laugh at her offensive jokes and tolerated her because she is cute. Maybe she will have a turn like Jessica Tandy in “Driving Miss Daisy” and learn to accept all people as equals……Ya….maybe a reach…..

What makes this season of BB interesting, in all seriousness, is the fact that there are clearly so many different ways things can go. Normally, the lines are clearly drawn by now, but this season is full of wild cards. There are still so many ways things could shake out, based on who gets HOH the next two weeks. When you look at the fact that the Alphas (Amanda, Spencer, Jeremy) are so clinically insane this year, so much is up in the air. Nick seems to have a clear plan to the Final Five, but the other houseguests are on his sleazy style. He lacks the ability to get others to follow him, which makes him a target for a backdoor in the next three weeks. If the rumors are true with who won the HOH, vengeance might be had. The house is in for a shakeup.