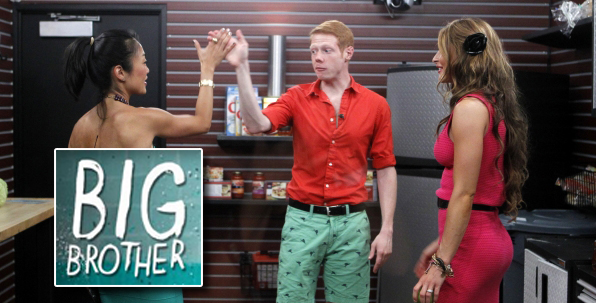 What a great week to consider the culture of the Big Brother house now that America is the MVP. America’s character is given a chance to shine through the choice of this week’s third nominee. But, in truth, “America,” in the context of this show, represents the part of the Big Brother audience willing or able to vote. However, as the disclaimer reminds us, the Big Brother houseguests are a cross section of the entire country. This disparity between the house culture and audience demographic is at the heart of what makes this week’s twist both compelling and frustrating. The influence of race, class and gender, as culled from The Book of Big Brother, chapter 15 verse 11, with full consideration given to its proselytizing audience, exemplifies the cultural weight of the show.

Did you know almost two thirds the Big Brother audience is female?[/caption]

Almost two-thirds of the Big Brother audience is female. This has proven a problem for other versions of the series, which enable the public to evict the housemates, as young women disproportionately leave the show early. With women audiences controlling the votes, it is only natural that younger men are kept in the game for the sake of extending any parasocial crushes lady viewers might form. Of course, there are exceptions, and womanizing and/or misogynist men tend to be targeted early too. But since Jeremy has already gone, the third nomination is destined to be the female player that has gotten on the female audience’s nerves the most.

Not only is the bulk of the Big Brother audience female, but they are also primarily between the ages of 25-44; this spells trouble for the frisky, naïve characters in the house, when dealing with a public vote. Think back to Big Brother 1, when it was the public voting out the houseguests: The final 3 were all guys because women outside the house tend to prioritize man-candy over gamers. In fact, the MVP nomination was allegedly conceived to eliminate floaters, but up until this week, it has ended up getting two of the most dominate figures in the house evicted. This week a floater is bound to go home because the viewers are the only party, other than producers, that are privy to whom is playing and whom is drifting.

Atop this, there are considerably more Caucasian viewers than minority viewers based on census data alone. The racial make-up of a season’s cast doesn’t quite parallel our national identity, but it has somewhat analogous ratios, when remembering that America is still comprised of 63% Caucasian people.  And having worked for Nielsen Ratings myself, it is very probable for the overall racial composition of a TV show to mirror its typical viewer. Consider the current cast: 13 players left; 77% Caucasian; 62% females; 46% Caucasian females. White girls rule outside the house every season, but this season especially, they have dominated inside the house as well.

This girl run game and the recent evictions are not ideal through the female gaze held by the majority of viewers. With three strong men gone, women would have been positioned well in the house, if the MVP twist hadn’t predictably skewed against them. If the rest of the season were determined by Big Bro’s America, and Elissa’s celebrity weren’t a component, Howard would have it in the bag. Howard as hero to Candice, a devout man, and a stud-muffin set him up to be audience favorite. However, most of the girls in the house, especially Amanda, know the sway Howard innately wields with the majority of viewers. She is working her darndest to nip it in the bud before all the white girls start dropping like flies, when he becomes a challenge beast.

To even vote for the MVP nomination as a viewer, you have to really care about what happens on this show; I mean, really care. My love of Big Bro is unwavering, but the thought of dropping a dime on a text message vote is absurd to me. Even if I were as affluent as the esteemed Doc Will, and could squander a dollar on such frivolity, it would really take my knowing someone on the show to put forth said effort. CBS does allow free voting on their website, but it requires registering with the site and giving away your precious email address. While this method speaks to the cheap-skate in me, it still doesn’t compel me to think an individual vote, or even the max of 10, is worth the energy. The voting fee via text message pulls votes from wealthier and/or impulsive voters, while the online option demands a time commitment. Either way, you have to be pretty into it to participate from your couch, which sharpens our concept of #BB15 viewership even further.

Here is the clearer picture of who Big Brother’s “America” really is: White women with money, time, and the capacity to get absorbed the most in the show. Obviously, other people are watching, but young professional Caucasian women, drawn to parasocial elements, are catered to. Perhaps the most compelling argument is that Purina cat food is one of the shows primary sponsors. But of the remaining sponsors: Macys, Sears, Crest, Kia, and McDonalds – Macys, Sears, Purina, and Crest are overtly aimed at women, shown to be traditionally responsible for most of the household shopping decisions. As ads support the airing of Big Brother, the revenue and livelihood of the series is directly linked to satisfying the largest part of the audience. In the end, the Kia driving, department store shopping, hygiene conscious, McDonalds chewing, cat ladies of the world are who matter the most to Big Brother.

Big Brother isn’t getting cancelled anytime soon, barring a murder in the house, and even then… It is a timeless paradigm with interchangeable characters that lets you fall in and out of it throughout your life.  As Hunger Games forecast, an evolved reality show could someday eclipse all organized sport, and were it to, Big Brother is certainly an early progenitor. Indeed, reality TV satisfies audiences in a lot of the same ways traditional sporting events do. The difference being, shows like Big Brother allow an emersion in the game like never before, for men and women alike.

Without the sexism associated with mainstream sports, Big Brother provides a co-ed, play-off sporting event, where the stakes are even higher due to how easy it is to relate with the players. Not only are diary rooms contrived so contestants are talking right at your face, making digital eye-contact, like they know you, but they are usually speaking with a personal urgency that is infectious and addicting for watchers; and, more often than not, the prize money would really make a difference in their lives, adding to our sympathy for them. Unlike a wealthy professional athlete, a reality contestant’s metaphoric life is on the line when playing the game of BB; and, sometimes heartbreakingly, these players won’t be back the following season… usually.

Without question, the show has the ability to reach a larger demographic, and appeal to more men, were it spun differently. Sites like RobHasaWebsite is a rare outlet that stresses the dynamism and ungendered fascination the show is worthy of. This site is setting a great example of how competition reality can be critiqued in the future with a more cultured, sophisticated take on it; But for now, the Big Bro promo team seems determined to continue relying on the same “sexy & fun” tropes when selling the show.

Ironically, the show itself spends very little time on how much fun the houseguests are having compared to the machinations of the plot and the consequences of various challenges. These elements of story and competition would actually pull in untapped male viewers, were they expressly advertised. The associative rags to riches storyline is a thread almost any guy can get behind, who has ever rooted for the underdog in whatever game. And there is a translatable sense of ownership as a fan, whether cheering on one’s home team or favorite houseguest. There is also the same sort of emotional investment in each, when anticipating success or defeat, that is just not mentioned enough.

While we will continue to see the casts of future seasons split down the middle in terms of gender, we are not likely to see much more diversity in regard to race, sexuality, and social status, unless Big Brother’s “America” broadens its audience base and reevaluates its appeal. When gathering potentials for season 16, perhaps these culturally significant facts about the winners should be accessed: With the exception of Jun, only white people have won the game; only straight people have won the game; and 11/13 of the winners had graduated college before the show. Here is to hoping that next year we are blessed with an impoverished, Gay-Eskimo winner, whom has only earned his/her GED.

Until next time, thanks for Parasocializing!