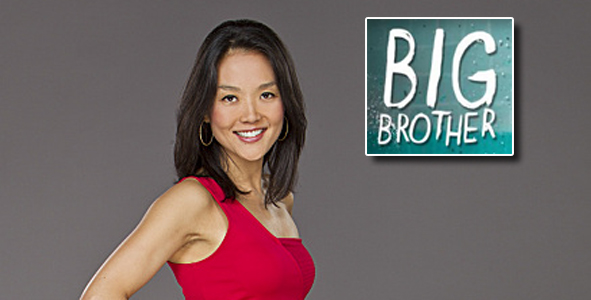 Expect the unexpected is the motto of Big Brother. Ginamarie winning HOH was unexpected. Staten Island Greats, like Ricky Schroder, Alyssa Milano and the Cast of the Jersey Shore were all seen shedding tears when the news broke of Ginamaie’s HOH win. The past three weeks, Big Brother has been like being stuck behind a bus on a one way street, as you know where you’re going to end up, but the journey getting there seems tedious, as apparently there are twenty eight stops in a one mile stretch. This is where the Big Brother game is now. Helen is basically in the role of “Godfather” right now and everyone else seems to fall in line with what Helen wants. Let’s try to sort out the Helen Crime Family 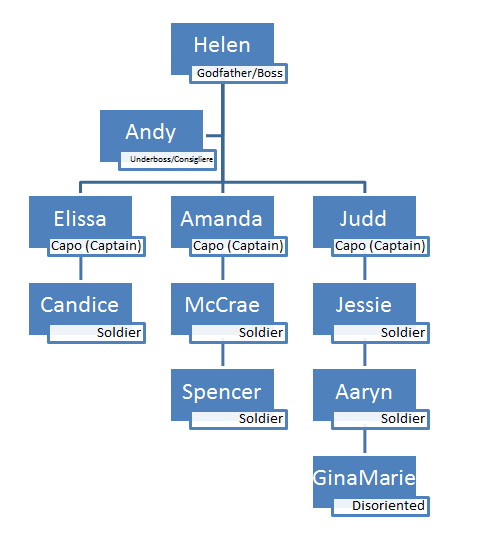 Like any good crime family, there is potential for some Shakespearean treachery.  In the history of Big Brother there have been some brutal stabs in the back. Look no further than last week, when boss man of this website, Rob Cesterninio had Shelly Moore on his podcast. I guess Shelly is shockingly already out of Jail for her brutal, unprovoked crime against Big Jeff in BB 13.  My point is now that the obvious targets have been vanquished, is this the week that a couple people on the lower end of the food chain make a move? Let’s assume that despite the fact that the biggest raciest on TV since Archie Bunker is in the house, that Amanda is put up for MVP again. Amanda is pretty high up on the food chain. Taking Amanda out this week would shake up the dynamics in the house in a major way. The past few weeks have really been about Helen rising to power. This week is either going to be another “stop on the bus route” with the eviction of Candice or were, “going to the mattresses” and Amanda is going to be sleeping with the fishes.

Let’s look closer at the player’s motivations this week. Again, I’m going to base most of this on the presumption that Amanda is going up as MVP again. On to the show:

For Andy, as unpleasing and predictable as it is, his best move is probably for Candice to go out this week. The Snake role that Andy has continued to play has gotten him to the second most powerful spot in the game as of now. Andy’s game is similar to Helen’s game, the difference being that Andy seems more like the “friend” to everybody in the house. Anything unpredictable is bad for Andy’s game. What do other people think here? Is Andy’s strongest loyalty to Helen, if not then who?

Thursday nights eviction will either be really exciting (Amanda goes) or really dull (Candice/Spencer) but either way, Don Helen will still be the head of the Big Brother family.