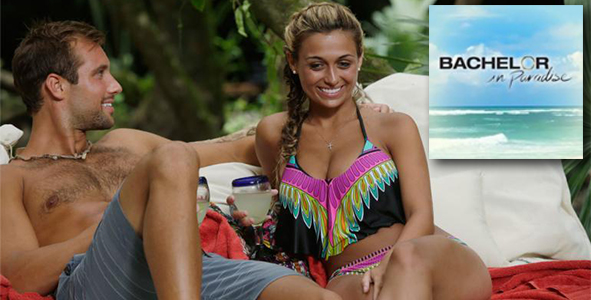 While we all know the real reason for this show was to trick ABC into paying for Chris Harrison’s Mexican vacation, I think we can all agree BiP was entertaining. Or at least more entertaining than a season of “The Bachelorette.”

We saw lots of tears, a handy, a crazy woman who talks to raccoons, a crazy woman who likes to get naked, a couple of d-bags, some nut jobs, delusional single men and women and A LOT of people with seemingly no relationship experience. It’s basically all the best things about the Bach franchise but in one setting.

While I’m sad to see the show end, at least it’s been renewed for a second season. Mostly because, and this is just a guess, there were a couple of guys from Andi’s season who were busy during the taping of the first BiP and ABC really wants every dude from that season on this show for some reason. I mean seriously, how many dudebros from Andi’s season were on BiP? 7? 8?

7:01 – Episode preview time. CHarr is teasing a big twist and all the bach and bachelorettes are nervous. Personally I’m hoping for all of their parents to come out and yell at them for embarrassing their families.

7:04 – Harrison just told the group that their relationships are “going to be put to the test.” I just saw Christy start to sweat; she left her Number 2 pencil back in her room.

7:05 – And Harrison leaves. He didn’t really say anything that made sense. Couples have to decide if they really want to stick with their partner? Um, wasn’t that what they’ve been doing this whole time? This feels like filler.

7:05 – 7:10 – Filler. Pure filler. Guys are talking to each other about Harrison’s cryptic message and so are the women. Right now this show is full of more filler than a McDonald’s chicken nugget.

7:14 – As the guys and girls are pow wowing, AshLeeeeeee goes on a rant about her wonderful relationship with Graham. Grandma Money can’t take Fake AshLeeeee any more and decides to go Graham and give him a heads up.

7:16 – Grandma Money lays it all out, completely exposing AshLeeeeeeee. Why she didn’t do this sooner so Graham could find someone more fitting, I’m not sure.

7:18 – So we CAN all agree that Grandma Money and Graham used to be a couple but she cheated on him, right? It’s the only way to explain how protective she is of him. That or he saved her life at some point. Maybe during a season of “Bachelor Pad” she was drunk, hit her head and rolled into the pool and Graham saved her? Let’s go with that.

7:22 – Because Grandma Money told him to, Graham grabs AshLeeeee and they go to the beach for a chat. I’m trying hard not to make a joke about AshLeeeees fake boobs being 12-inches apart. It’s very challenging.

7:24 – Well that was abrupt. “I just don’t think I can continue on,” says Graham. Grandma Money speaks, Graham jumps. Three thoughts on this:

1 – This show needs a reunion show so we could see Money and AshLeeeee duke it out.

2 – Graham better go into witness protection because there’s a good chance AshLeeeee will hunt him down and kill him soon.

3 – AshLeeeee said she wished she knew sooner about Graham’s feelings and she has a legit point. If Graham knew this relationship wasn’t real (which I’m guessing he did based on how quickly he cut her loose) it sure seems like he hooked up with her just to stay on the show.

7:34 – And now Graham leaves. Is this the “big twist”? Reminding people that the show is about to end? Really? There better be more than this or I’m going to be ticked.

7:36 – The breakups are coming quick. Tasos and Christy “break up,” as do Jackie and Zack. What the hell is going on?!? What else did Chris Harrison say to scare these people off? There has to be something that was edited out. What are the consequences of a couple lying about their relationship and sticking around a bit longer? Do they have to go on a two on one date with Kalon if they lie?

7:39 – Hey oh! I just saw a commercial for the VH1 show “Couples Therapy.” Juan Pablo and his top pick (I forgot her name) are on it! I don’t know what’s more shocking, that Juan Pablo would admit he needs relationship help or that ABC owns VH1.

7:43 – Only three couples remain – Cody/Money, Sarah/Boring Robert, Lacy/Marcus. Money, again, is getting ALL the camera time. For the 234th time we hear about her abandoned kid and how Cody is way more emotionally ahead of her. So what does Michelle do? Call her daughter for advice. Says Kid Money:

“You don’t have to be tied down. Take all the time you need. It doesn’t matter if they’re really cute or not. What matters is their personality and if you have a lot in common.”

Amazing how a 9-year old is more emotionally mature than all of the adults on this show. And yes, Kid Money would make a great name for a rapper. Dibs!

7:46 – In walks Harrison. The remaining three couples are all in. So far the big twist is Chris Harrison forcing people to talk about what their relationship is all about and how they’ll adapt once they get home. Harrison’s turning into Dr. Phil.

Oh wait, there’s more. Adding to the “realness” is each couple getting an overnight date. Because real couples spend the night together I guess, unless your Libby and Bill Masters from Showtime’s “Masters of Sex.” Chris Harrison is forcing these three couples to have coitus! What a perv.

7:57 – The dates have all started. For the 12th time tonight Michelle Money tells us where her relationship with Cody stands. So. Much. Filler.

7:58 – Sarah is ready to get DOWN. Says Sarah, “Tonight’s the night for Robert to get to know me in every way possible he can get to know me, off camera. This is a huge step in any relationship and I hope he goes there. I hope he digs deep.” Sexual euphemisms aplenty!!! She might as well be saying, “He better knock it out the box.”

8:00 – The focus has turned to Lacy and Marcus. They are SOOOOO boring. Between her Minnie Mouse voice and his whisper talk I just can’t stand them. After spewing mushiness at each other they start making out. Cue camera panning left.

8:02 – Now on to Money and Cody. Very different vibe. Cody, who looks hammered, says something semi-coherent. Pretty sure he just wants to get to it.

8:03 – But just as Cody starts to think he’s going to get it in Money says, “You do know you’re not getting laid tonight?”

8:04 – And this is why Grandma Money has been on 18 different version of this show. Says Money, “Sometimes I get the impression that guys with that big a body have a small (rooster). But I could be totally wrong; maybe his (rooster) is totally muscular like the rest of his body. Like The Hulk.”

I’m going to bet Money’s curiosity got the best of her.

8:09 – It’s the next morning. All three couples seem happy. Of course, Grandma Money (who looks like she had a long night) steals the show, “After the time that I got to spend with Cody last night, I’m really sore. And very satisfied.” Now we know why Michelle was so hesitant, she wasn’t sure Cody could deliver. Guess she got her answer.

8:12 – Uh oh. Things didn’t work out well for Sarah and Robert. Well, not Sarah anyway. They certainly didn’t coitus. In fact Robert went to bed with his jeans on! Never in my life have I ever gone to bed with jeans on. EVER. Sarah, naturally, feels rejected but Robert doesn’t seem to have a clue. What dude doesn’t get that big of a hint that a woman wants to get down?!? Most men don’t need a fantasy suite to get the message.

8:16 – More quotes from Money as she’s talking about Coitus Cody to Lacy, “He has an amazing (rooster) and he’s really good in bed. We (bleep) (bleep) in every (bleep) in that room.” If Cody ever breaks up with Money he can have pretty much any woman in America. That’s how much Money is talking up Cody.

8:18 – The Sarah overnight was even worse than I thought. Says Sarah, “Last night I get up to brush my teeth. I come back out and the lights are off and he’s (Robert) in bed. I get in bed and he had his jeans on. I went to unbuckle his pants and he stopped me.” Remember what I just said about Cody? Sarah is doing the complete opposite of that for Robert. What is wrong with that guy?

Sarah continues, “We were French kissing throughout the night but no touching my leg. No spooning me, no neck sucking, nothing. His hands did not touch my body anywhere below the neck. And he was on the opposite side of the bed facing the opposite direction. I don’t even know if he has a penis.”

Wow! Robert clearly DID NOT knock it out the box. He may have to leave the country to find a wife.

8:22 – After an unproductive talk, Robert, who has the emotional range of a Vulcan, decides to leave. Sarah’s upset but she made the right move. I don’t get that guy. Either he’s emotionally inept or he’s really not into Sarah but couldn’t admit it to himself.

8:30 – And then there were two couples. Harrison is having a pow wow. With 30 minutes remaining I have no idea what could be left.

8:32 – What is this? An intervention? “Successful Bach couples” Jason and Molly, Desi and Chris, and Sean and Catherine just popped out. Where the heck is Trista and Ryan? Trista never misses an opportunity to be on TV. Maybe they’ve broken up!

8:34 – Every time I see Jason Mesnick all I can think of is him crying over a glass balcony during his season of “The Bachelor.” Classic Bach moment. Might be the best ever.

8:42 – For some weird reason there’s another rose ceremony. Cody gives Michelle a rose and tells her that he loves her. Kinda weird. Now Money is chatting and tells Cody she’s happy he’s willing to move to Utah. Wait, say what?!? Cody must not of heard the Utah part and accepts the rose. And now they walk off on the beach.

8:46 – Marcus and Lacy are up. Marcus asks for a timeout and Harrison grants it. Here comes the marriage proposal that ABC has been spoiling for a couple weeks.

8:50 – Marcus and Lacy walk down to the beach, “I thought I knew what love was before. But then I saw your amazing bod and realized that skinny girls like Andi can’t hold my attention.” Okay, I made that last sentence up but the first sentence was real. So real it made me think of the Foreigner song, “I want to know what love is.” Thanks a lot Marcus!

8:52 – Hello! Marcus drops to a knee and asks Lacy to marry him. She says yes. Where they hell did he get that Neil Lane ring?!? Now that Trista and Ryan are over maybe she had to turn hers in?

8:56 – And everyone hits the beach and walks away. But not before Lacy says to Marcus, “You make me feel like paradise.” Whatever that means. Another euphemism maybe?

That’s it folks! Thank you so much for joining me this season! Next week I’ll be podcasting about the best (and worst) new fall TV shows with Rob. Hope you’ll have a listen.

See ya next season!