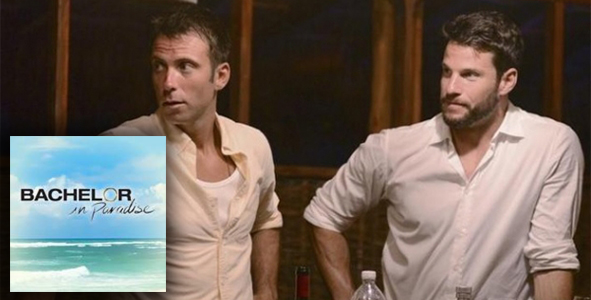 I interrupted my viewing of the Emmys to switch to “Bachelor in Paradise.” I usually enjoy Seth Myers but his softball jokes about cast members of “Game of Thrones” getting killed off and MTV no longer playing music videos were just too lazy. I expected more from you Seth.

Also, did anyone else NOT recognize Zooey Deschanel when she doesn’t have bangs? She came out and gave an award to Louie C.K. and I wouldn’t have known who she was without Myers’s introduction.

Last Emmy note, I don’t even like Jimmy Kimmel but the time he had onscreen was funnier and edgier (slightly) than anything Seth Myers did. Why isn’t Kimmel hosting this? I guess because it’s a big step down from the Oscars.

Okay, one last last Emmy note. How in the world is “Survivor” not nominated for best reality show?!? That’s just wrong on so many levels. Two dancing shows and a singing competition are better than “Survivor?” Really?!? Someone’s going to be getting a strongly worded email.

Okay, enough jibber jabber. Let’s get to this week’s episode. Remember that there are TWO episodes this week – one today, one tomorrow. TWICE the normal dosage of Chris Harrison! Be sure to call your doctor if you have adverse side effects such as mood swings, rectal bleeding and an increased sense of self-delusion.

7:02 – During the episode preview Harrison reminds us that this is a “Special Bachelor two day event.” This means you could probably ask your boss for tomorrow off. Don’t quote me on that.

7:05 – We start the episode at the end of the last rose ceremony. Grandma Money is still making a big deal of Bukowski giving her a rose. He didn’t offer you one of his kidneys Money, let’s not pour it on too thick.

7:08 – More crying by Grandma Money. She’s permanently locked in a glass case of emotion. The case is made of 50-year old glass so she should be able to get out of it. Meanwhile, Robert got a date card and asked Sarah and not Money, so she runs to a bathroom and starts crying. She’s bummed that everyone has someone but her. Money does know these aren’t the ONLY people in the world, right? She doesn’t actually have to marry one of these dopes. Hasn’t anyone explained that to her?

7:10 – Now I know why Michelle Money is single. She lives in Salt Lake City. A woman as aggressive and gold digging as Money needs to live in LA.

7:15 – Grandma Money is fixing Sarah’s hair before her date. She’s all sobby about it and telling Sarah how alone she is. I think she purposefully got snot in Sarah’s hair.

7:18 – Sarah and Robert are on their date. Like all the dates this one is really boring and no one says anything but clichés. All I can think of on the date is “How does Sarah tie her swimsuit top?” Is that horrible of me to wonder? Nah.

7:19 – Cody just showed up. Because this show needs another deep tee wearing bro from Andi’s season.

7:20 – Cody’s arrival brings Michelle Money out of her cave. She comes out, does her best Wayne impression and whispers to herself, “He will be mine. Oh yes, he will be mine.”

7:21 – Cody, coming in with a date card, asks Clare if she wants to go out on a date. Does Clare have “EASY” written on her forehead? Is that why every new guy picks her? The Juan Pablo ocean coitus situation must give off that vibe.

7:23 – Clare was about to shoot Cody down because she’s “vibing” on Boring Zack but give the girl a compliment or two and she’s putty in your hands. Clare goes to Zack and asks if he’s cool with her going on a date to gauge his level of seriousness. Zack failed her mind game, hinting that he might go out with someone else depending on who showed up.

Well played Clare, well played. You put Zack in a no win situation. If he says no, you can’t go on a date he’s telling you what to do. If he says yes you can, he’s not serious.

By asking Zack whether or not you should go on a date you’re telling him you’re having doubts about where you two stand. Clare is jamming a relationship down Zack’s throat, even though they’ve been out there 5-6 days.

7:38 – Clare turns down Cody’s date. I’m a bit surprised. Was she testing Zack the whole time or was this just clever editing? Either way, time for Grandma Money to swoop in and pick at the Cody carcass.

7:39 – Cody just referred to himself in the third person. I hope he does this all the time.

7:40 – Cody says he is heartbroken Clare turned him down. He clearly doesn’t know what that word means.

7:48 – Being the generous guy that he is, Cody gives his date card to Marcus so he and Lacy can go on a date to a slightly fancier version of Taco Bell. Of course, this impresses Clare.

7:50 – Marcus mentions Andi on his date. As if she were a real relationship. Dude, you traded up. Lacy is way more attractive.

7:51 – Oh come on! Marcus just let the L word slip and Lacy said in a one-on-one that she wanted to say it back! Really?!? Is love actually possible on this show? I thought the best I could possibly hope for is ocean coitus and balcony leg breaking. But no, we could get true love too? Or at least the Bach version of true love.

7:52 – Zack and Clare are having a serious talk. Zack wants her to know that all of his eggs are in Clare’s basket. That has to be some kind of coitus euphemism.

7:54 – Yes! Kalon just showed up. With Ben gone we needed a new villain. Grandma Money is sooooo desperate she won’t have a choice but to hook up with him. Maniacal laugh!!!

7:56 – After just saying what an a-hole he was, Michelle Money accepts his date offer! This is followed by Kalon saying, “I just want to zipline right into her ti$Z. I would motorboat the sh%$ out of that.” Kalon makes Ben look like a Boy Scout.

8:00 – While he’s preparing for his date the next day, Kalon says, “Today’s date is probably more about me.” Have ABC producers told him how desperate Money is? Is this part of an evil plot by Chris Harrison to get revenge on Money for rejecting his advances? I’m going to say yes to both of those.

8:02 – Uh oh. This date is not starting well. In fact it’s not starting at all. Evidently Grandma Money is friends with Emily Maynard, whose season Kalon was on. You might remember Kalon being called out for calling Maynard’s kid “baggage.” The B word rears its ugly head again and Money decides she can’t go on the date. Single moms represent! Good for you Money.

8:03 – Undeterred by his rejection, Kalon decides he wants to use his date card. On anybody. Jackie shoots him down and Sarah shoots him down, so he decides to go by himself. Hope he brought a mirror.

8:08 – Kalon going on his date alone is depressing. Almost. Then he says as he’s spelunking, “I’ve never gone into a giant Mexican hole but I have gone into a tight Mexican hole.” What an ass.

8:13 – And some guy named Jesse showed up. He was on Jillian’s season but I don’t remember him at all. But at least Money finally has someone to try and snuggle up to. Until Jackie agreed to go on a date with him.

8:17 – Jesse is trying very hard; he wants to stick around and doesn’t really care how. It seems to have worked as Jackie completely falls for his BS, even though he doesn’t seem that into her. He even says she’s his only option. Smooth Jesse, smooth.

8:19 – Holy cow! We truly get a lame Bach moment. There’s some poor sucker playing a guitar with a cellist just so Jackie and Jesse can dance awkwardly in front of him. And he’s a white guy so they had to have flown him in. That’s an expensive guitarist for 15 seconds of airtime.

8:26 – Time for some drama. AshLeeeeeeee is trashing Clare to Zack, “I love Clare but (makes cuckoo noise). She fuc&#$ a guy in the ocean are you kidding me?” I might be wrong but that might be a sign she DOESN’T love Clare. You can’t say whatever you want about somebody by prefacing it with “I love (submit name here) but…” and then proceed to trash them. That’s not how it works.

And has AshLeeeeeeee ever seen herself on camera? She’s more cuckoo than a, um…what are those German clocks called that have birds coming out of the them when it’s the top of the hour? Those things.

8:28 –  Hahahaha! AshLee just realized that she’s on camera. Seriously. She mistook a camera for a light fixture. Her stomach must have dropped instantly.

8:29 – And now AshLeeeeee is backpedaling faster than Richard Sherman. She’s telling everyone in the house what she said. Everyone keeps saying she’s a different person on camera than off.

8:30 – Two great lines from Lacy – “AshLeeeee has a guilty conscious” and “She (Clare) did not have sex with Juan Pablo in the ocean. And we all know that’s not the case.” Milk just came out of my nose and I’m not drinking milk.

8:32 – And Clare just grabbed a pair of long kitchen knives. She looked just like TMNT Leonardo. Is there some kind of Kill Bill-esque fight scene coming that wasn’t featured in the promos? Or more clever editing?

8:39 – AshLeeeee asks to talk to Clare, saying she doesn’t know what’s wrong. Oh come on, not even Clare is going to buy that. I think I see Clare reaching for her katanas.

8:41 – We’re certainly seeing AshLeeeee’s multiple personalities. In a one-on-one she says, “I make a conscious decision to help everyone around me be happy” and then tearily adds, “It hurt my feelings.” Then, when she thinks she’s off camera, she’s caught calling Clare a female dog. FAAAAAKKKKKKKEEE.

8:47 – Final cocktail party time. Cody is working Money and Jesse is working Jackie. These people will say ANYTHING to stick around.

8:50 – Grandma Money just called Graham the “most forgiving guy.” So we can assume she cheated on him, right?

8:51 – Money just told Graham what went down between AshLeeeeeee and Clare. He had no clue because he’s a guy. Big difference between Confident Money and Desperate Money.

8:58 – Final rose ceremony time. We all know Kalon is gone, wouldn’t be surprised if Marquel is gone too, but I’d rather see Jesse leave. Something about that guy is not right.

9:00 –  AshLeeeee offers Graham her rose…and he leaves the room. Where is he going? Now Money follows him. In his drunken stupor Chris Harrison is utterly confused!

And we’re left with a giant “to be continued.” Gah! See you all tomorrow!