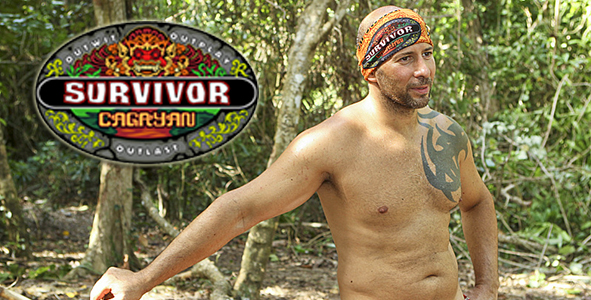 Confessional of the night: “She had me swear on my badge, which that doesn’t mean anything to me, swearing on my badge. ’Cause I’m here to lie, cheat and steal. I’m here to drag peoples’ dreams through the mud so I can fulfill mine. That’s what I’m here for. Whatever I have to do, I’m gonna do. It’s as simple as that.” – Tony

There are many questions you should ask yourself before playing the game Survivor. Here are a few that should be at the top of the list:

Take your self-aware (or non self-aware) answers, store them away and apply this fall.

But first, I need a little information:

If so, then ask yourself this: If you can’t trust yourself to do right by yourself, how can you expect others to do any different?

Time for “10 sentences or less”. Some of them have definitely been more than 10 sentences. Don’t care. Lets go! 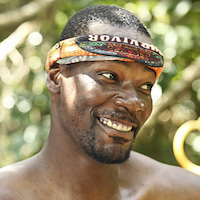 Cliff has a lovely voice.[/caption]

Cliff has a lovely voice. Don’t you wish Cliff would sing you lullabies and read you bedtime stories? I bet Lindsey would. That’s a bit catty.

I enjoyed the playful moment between Cliff and Lindsey. It proves Cliff can make anyone laugh and smile. You just took a dig at Lindsey and you’re calling me catty? It’s a compliment to Cliff! But hey, she was fair game when she made fun of Trish’s appearance.

Cliff needs to stick around and put the rest of these fools to sleep. Full circle! Bingo.

During the challenge, Lindsey was the only woman to get hit in her baby maker. I mean, stomach.

With each clobbering, she became more paralyzed. She looked like she had rigor mortis after the final shot to her offspring counter. Why don’t you just say the word vagina?

Good lord. Do you always have to be so direct?

Half of #CopsRUs is getting played like the train section at Toys ‘R Us. BOOM! Did you really just say boom after your own joke? You’re right. I should have said, CHOO-CHOO!

Considering there’s no such thing as karma, I’m all for throwing challenges. But there are certain criteria that need to be met. Play along and ask me questions. Okay? Okay.

Who do you tell about throwing a challenge?

No one! Well, no one except a camera and producer. And it has to be BEFORE the challenge. You should also come up with a slick physical or verbal cue indicating to the audience at home you’re still going through with your plan once you get to the challenge site.

When is it okay to throw a challenge?

Whenever you see fit. If you believe it’ll benefit your chance of winning, DO IT. With that said, it has to be based on firsthand knowledge or your own intuition. You can’t base it on the rumor mill.

If you disagree with the above, you’re wrong. Although you can find comfort in the majority, which includes Dalton Ross (Entertainment Weekly), Eliza Orlins (Vanuatu) and any other inside the box thinker. Shots fired!

Tony can’t stop! And he won’t stop. He’s a fiend for the game. He’s addicted to the lies and manipulating.

He must be like the junkies he comes across on a daily basis back in Jersey City; always looking for that next fix, that next lie. At this point, the high of the game for Tony is too powerful to overcome.

Who will he make connections with in regards to the other two tribes? His type of personality has a limited range. Why are you coming down so hard on Tony? He’s supplied us with plenty of entertainment!

I feel awful. Actually, that’s a lie. I don’t feel awful. It’s who he is and I’m calling it like I see it. Like any high, Tony’s is about to come crashing down. Expect his withdrawal process to be a spectacular show!

Trish is in on the fix! Did you see her in the water? Yes. I watched the episode just like you. What an actress! Looking like she needed swimmies when she’s definitely swam in the Boston Harbor.

She’s the exact type of person you want to compete with. She’ll leave it all out on the field and she won’t bitch or boast. She’s the golden teammate. Not if you’re Cliff. Yeah, well, she hates black people. OMG. I’m kidding! There are teams within teams in Survivor. It’s more intricate than sports.

Who’s the hashtag operator, CBS!? Woo wants to know! You know he had the episode title, right? “Our Time to Shine” isn’t enough!

If video game NBA Jam were still around, Woo would be an unlockable secret player and children all over the world would be playing as team Brawn with Cliff and Woo. They’d be shooting undeniable jump shots all day. ALL DAY.

It’s a showmance like no other. Isn’t love great?

We all know J’Tia had it rough out there. I’m not going to kick a dog when it’s down. Referencing last week’s column? Sure am. I should start calling the column Full Circle. Anyway…

J’Tia wasn’t good physically. She wasn’t good mentally. And she wasn’t good socially. It doesn’t make her a bad person. It makes her unsuitable to compete in environments such as Survivor. Luckily for her, there are few places that can replicate the game.

For someone who performed so poorly and received much criticism, she’s handled herself well. And I’ll always tip my hat to that. Booooo! You’re a softie! You’d probably suck at Survivor too, cream puff boy!

This is where Kass is wrong:

“Am I the hatchet man for J’Tia or Spencer? I can live with either decision. Either one’s the same gamble to me because I can’t predict what’s going to happen tomorrow.”

I understand she wants to make a decision and move on, but she’s wrong because

a) it’s NOT the same gamble and b) you CAN predict what’s going to happen tomorrow. You sound annoyed.

I slightly am. Within this game, every potential outcome has a perceived and actual percentage tied to it. Whether you’re right or wrong, doesn’t matter. What matters is you acknowledge these percentages exist. To conclude both J’Tia and Spencer present exactly the same risk is ludicrous. I don’t think I’ve ever heard you this angry before.

Let it be known, Kass is a joy thief.

Oh no. What’s this? J’Tia and Kass can’t seem to secure a rebound. They’re certainly having some trouble, Mike. Who the heck is Mike?

The balls are slippery and it’s making the outlet passes to Spencer that much more difficult! Their tribe is like a seizure, Mike. They have no control over themselves!

Spencer, spazzing out as J’Tia’s fumbling the ball! He can’t take it anymore! Oh my. You have to feel for Spencer. He did all the legwork to get them to this point and his teammates are throwing it away.

Incredible. It wouldn’t be the Brains tribe without some hemorrhaging. Good one, Mike. It’s about time they get sent to the trauma center.

“STOP! LET THEM GO!” Oh my goodness. Shoot me now. Give me a gun. Whoa, whoa, whoa. I’m kidding. I’m way too egotistical to command my own death. That’s for sure.

Tasha is grating. I thought she’d crumble under the pressure and hide. She’s crumbling all right, but she’s not hiding. Which makes me believe the Brains tribe was destined to fail. It’s taken you this long to figure that out? I’m patient in my decision-making, Kass.

You said, “Sorry!” when LJ kept walking into the obstacles. Sorry? SORRY?

If I were LJ, I would have been asking for a little, uh, you know, treatment work. And that’s not because it’s Alexis. Even if Jeremiah were the caller, I’d be asking for some TLC. But not Brice, if he were in the game, because he would like it. Well, Alexis would like it too. But so would I, which makes it different from the Brice situation. Jeremiah and I both wouldn’t like it, but at least I could make Jeremiah feel uncomfortable for all the pain and suffering he caused. You make no sense.

OH! Last week Michel, the one who spews venom on the edit, suggested I was becoming an Alcolexis. From what I can tell, it’s not a rare condition. That means I’ll have a support group. I want you to know, I’m taking this seriously. Thank god. No more unwarranted Alexis worship.

What was that? YOU MAKE ME CRAZY! Make? But— DON’T SAY A WORD.

What? You thought I’d bring up the chicken and egg thing in Alexis’s section? This is biased writing at its finest; welcome it with open arms, my southern readers.

Jefra suggested a heat lamp was needed to produce chicks. Now, I know you expect me to rag on her a little bit, but if I did, I’d be ragging on myself. I didn’t necessarily know the whole chicken reproduction system either. How surprising.

Jefra obviously mentioned the heat lamp thing because your elementary school science teacher should have had your class foster eggs into baby chicks. But do you think they’re explaining chicken sex to six year olds?

Jeremiah gets all the chicks! It sounds like you don’t have anything for Jeremiah again. Yeah. Sigh. It makes me feel inadequate. Aw, you poor thing.

Are you being sarcastic? If so, I don’t appreciate it!

What can I say about him this week? He’s a great ball tosser? That’s lowbrow humor. He makes all the chicks run around like they have their heads cut off? Awful. Where can he collect on his newly acquired man points? Who gives a sh*t. Collect them at Dave & Busters for all I care!

I want him gone. I can’t produce material out of thin air.

Speaking of thin air, I could really go for some Thin Mints. Mm. Me too. And frozen! They’re so good. The one good thing about this section; Thin Mints!

I don’t want to beat a dead horse, but— More horse jokes, huh? Yes? Is there a problem with that? No. I just don’t find them that funny.

Me neighther. Again. Not funny. Sorry I don’t know any boretending jokes. Just so you know, I’m shaking my head.

On a more serious note, no one’s going to be ingesting LJ’s cocktail anytime soon. Hahaha. I crack myself up. You know, because of the challenge. Resorting to vulgar humor I see.

But really though, LJ flashed some personality during the chicken and egg rigmarole. That was nice of him. Speaking of getting flashed…

I loved when Morgan nonchalantly called out Jeremiah in front of the group. LOVED IT. It was so laid back, so matter of fact, with no emotion tied to it. Then, to put the cherry on top, she lays the details on Alexis. That’s how it’s done, folks.

Then again, she committed the same sin as Lindsey. She bashed Jeremiah’s appearance. That means she’s officially fair game.

Why haven’t you made a comment on her looks yet? I’m keeping you on your toes. Predictability is a loathsome quality. Not in the game of Survivor!

Probst, without a shadow of a doubt, steered the malleable Kass and Tasha into keeping Spencer. And this is coming from someone who believes, as a player, it’s your job to overcome every single aspect of the game, including Probst himself.

He worked those ladies though. He worked them good. Real good. Damn straight! Probst loves c*ck!