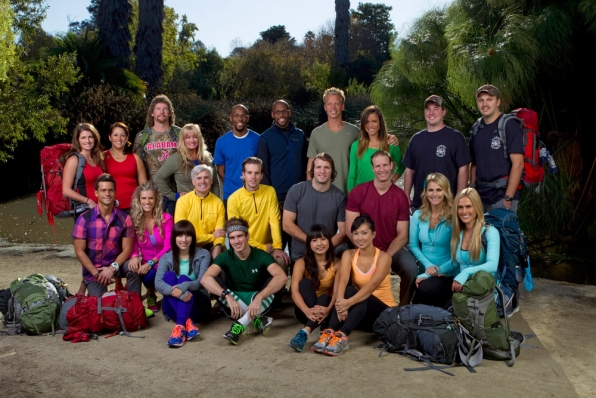 As happy as I am that The Amazing Race is finally back on, if we’re being completely honest, this first leg in Bora Bora was a little Boring Boring. It isn’t the first time the show has started with a whimper rather than a bang  in fact, this seems to happen more often than not. (One season, the Race tried to do a two-hour premiere and spent practically the entire first hour cruising around on the LAX parking shuttle. Scintillating stuff.) With 11 teams to keep track of, nobody gets enough screen time, and everyone is adjusting to both the intense travel and the cameras that are constantly in their faces. It typically takes a few days for teams to forget they’re being filmed and let their true personalities out.

But this premiere was even more lackluster than most. I have to admit, while Bora Bora is absolutely beautiful and I want to go there immediately, I don’t love it as a first-leg location.  Since most of the island’s revenue is from tourism, most of their infrastructure and facilities are designed to make travelers more comfortable. Thus, all of the usual challenges of the race navigation, language barrier, culture shock were effectively nerfed on this leg. Apart from one guy with a ukulele and a woman that Chuck and Wynona accidentally found, we saw very little of the local culture, and all of the the tasks could have been done pretty much anywhere with a beach. If the locations aren’t themselves a central character on the Race, why not film the whole thing on a sound stage in California?Â  Hopefully the second leg will give us a better look at the island itself.

True, the absolutely grueling sandcastle Roadblock partially compensated for the relative ease of the location (and the total lack of competition involved with skydiving), and may have been the sole bright spot of the episode. Honestly, if it wasn’t for the sandcastle task, even I might have found myself switching over to the NBA All-Star game after a while.

The fact that racers had to rebuild each sandcastle after destroying it definitely added a new wrinkle to the typical needle-in-the-haystack tasks that crop up each season, and the punishing heat added a sense of urgency that would otherwise have been entirely missing from the show. Cruel as they can be, random-chance-focused tasks are a fantastic way to observe how teams cope with forces outside their control â€“ a vital skill on the Race.

A question came up on Twitter and in our podcast pertaining to the last three teams and their penalty – namely, once the firefighters, blondes, and newlyweds quit the sandcastles, could one of the teams then return to them and finish the task before hitting the mat? The answer, to the best of my knowledge, is no – once they’ve received the next clue from the task monitor, they are totally done with the task. The main reasoning behind this is that up until this point, they did not officially know what the next step in their race was. The clue could read, “sprint 50 yards down the beach to where Phil is,” or it could read “complete an Ironman triathlon and check in at the mat next to the finish line.” Once teams have opened the clue, what’s in it might inform their decision to quit. So once that envelope’s open, they’re locked in to their decision.

Regardless, it wouldn’t have been a good strategic move for one of the bottom three teams to un-quit. Best-case scenario: if, say, Matthew and Daniel had taken back their task-quitting, gone back, found their clue right away, and beaten one of the other quitter teams, they’d be branded as having gone back on their word for the rest of their time on the Race, and they’d spend the next however many legs eating U-Turns and being shunned.

Keeping your word and sticking to promises might be the Amazing Race’s most reliable source of inter-team drama. Since alliances are a little more fungible on a show where you don’t vote out your competition, tensionÂ has to be milked out of smaller favors and trade-offs. So when it comes time for John and Jessica to give up their second Pass (a new wrinkle that was added this season for the sole purpose of creating discord among teams), we’re going to see their decision from every possible angle the production team can throw at us. Inevitably there will be a moment when they’ll have to decide whether to honor the agreement the top five teams made on the first leg or burn off the pass some other way.

This is really a no-win situation. I’d liken it to the overnight rewards on Survivor. Someone is going to believe they deserve that pass more than whoever actually gets it, whether it’s Dave and Connor feeling burned because John and Jessica don’t honor the agreement or some other team believing their special bond with Team Tan and/or in-general special neediness entitles them to the pass. John and Jessica, meanwhile, will have someone angry with them on day one just because the game bestowed a reward on them that they didn’t ask for and may not have even necessarily wanted. In the end, I foresee the extra pass being much more trouble than it’s worth, especially since the Pass has rarely had a significant impact on the game.

Who’s flying high this week? In the first leg, it’s hard for a team to stand out other than the obvious first-place finishers (and even they didn’t stand out all that much).  And it’s even harder to stand out when your finishing order is dictated mostly by how quickly you randomly stumbled upon an object. That said, Chuck and Wynona’s tenacity surprised me (I’m serious, Wynona, I’m totally going to buy you a vodka-7up at TARcon!), and Pam and Winnie got in some great one-liners. There were not many mistakes to make, so most teams didn’t make any.

Who’s crumbling like a poorly-made sandcastle? Idries and Jamil started out strong, but quickly fell apart when the tables turned against them. This does not bode well for our new twinnies. Luck is always a major factor in the Race, but teams who can keep their heads clear and their emotions under control have a better chance when the odds are against them than teams who fold under pressure. Put another way, when the Race gods are frowning on you, it’s always better to hold on to that 1% chance you are not completely screwed than it is to sit back and complain as the inevitable happens.

Roller Derby mom Mona made a rookie mistake when she didn’t notice she was writing her name on the wrong line of the skydiving sign-up sheet. Attention to detail is paramount on the race, and it goes way beyond just reading the clues. They got lucky this time, but the derby moms need to sharpen up if they’re going to stick around much longer.