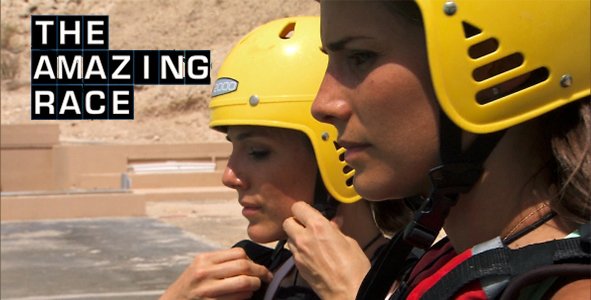 From pretty much the first minute, the writing was on the wall in this week’s episode of The Amazing Race, and that’s all down to faulty leg design. The Bunnies were screwed, and all we could do was sit back and wait for the inevitable.

I don’t love it when non-elimination legs take place without a change in countries at the beginning of the next leg. And I really don’t love it when they take place right before a leg with a U-Turn, either. So I loved it least of all when both of these things happened in the same leg. With both of these factors in play, Nicky and Kim’s fate was sealed well before they even ripped open the first clue this week.

It would have taken a screw-up of epic proportions to give them even a ghost of a chance. We’re talking a team driving 100 miles in the wrong direction epic, or quitting a Roadblock epic, or putting unleaded gasoline in your diesel car epic. And nothing on this leg was hard enough to find, do, or facilitate that any of this would have happened. It didn’t even matter in the end that the Speed Bump required a modicum of actual skill, but that was just adding insult to injury.

The bunnies, at least, needed to catch up.[/caption]

If non-elimination legs are going to do anything but delay the inevitable, the Speed Bumped team needs to at least be able to catch up. In legs where teams have to travel to a new destination, a savvy flight nab or a little airport bunching can put the last-place team back in a position where the Speed Bump is naught but a minor inconvenience. Teams have even won legs in which they’ve faced a Speed Bump. That wasn’t going to happen here. Nicky and Kim started in last and barring some serious ninja moves, last was where they were stuck. The Ice Cababes and their navigational errors were probably the Bunnies’ closest competition for most of the leg and it was never very close. And the U-Turn removed even the smallest trace of doubt that might be lingering.

It’s debatable whether they were the weakest team left, but the Bunnies had to be in at least the bottom 50th percentile, strength- and skill-wise, on this Race from day one. So even without the U-Turns and Speed Bumps, the Race would have had to work hard to inject any kind of tension. And with them, there was none whatsoever. That being said, what The Amazing Race lacked in suspense this week, it more than made up for with some seriously fun-looking tasks and an opportunity for a couple of previously dull racers to shine. At least we can squeeze some good analysis out of it.

This week’s U-Turn was an interesting study in contrasts. We have one U-Turn that happened in the midst of a complicated, strategically flashy move, by racers who pretended it wasn’t motivated out of sheer spite, and it ended up having little net effect on the Race itself…and we have the second U-Turn, deployed by racers who were quite up-front about the spite, that was actually strategically pretty savvy and could well have contributed to the outcome of this leg.

The Express Pass, to Travis and Nicole, wasn’t the “Get out of Jail Free” card that most other teams tend to see it as. In essence, they decided they could handle anything the Race threw at them without an insurance policy and decided to use their Express Pass to other ends—a way to skip ahead of the pack and reach the U-Turn first so they could …U-Turn the second place team?

On its face, U-Turning the Afghanimals didn’t really have a net effect on the game. It’s true that Leo and Jamal have been racing very well lately (especially considering the fact that they weren’t particularly impressive in the first few legs), but they aren’t the biggest threat by a long shot. And if the intent was to try to eliminate them, this isn’t the place to do that, either. U-Turning them is not going to knock them out of contention entirely—not when there are four teams, one of which had a speed bump, behind them.

It just didn’t seem like “they tried to fib about using up their U-Turn” was a big enough reason to target Leo and Jamal. Is that not exactly the same tactic the doctors themselves deployed when they tried to keep their newly acquired Express Pass under wraps? This is pretty much the same thing as Tim and Marie severing their alliance with the Bunnies for not sharing, all the while very obviously Not Sharing their own advantages with ANYBODY. No need to fumble around for a specific race moment that got under your skin, docs. Just do like Marie and admit you’re U-Turning ’em because you don’t like ’em. (And if you’re structuring your whole game around getting the opportunity to U-Turn them, you must REALLY not like ’em.)

The prospect of finishing the leg in first place isn’t even a big enough reason to target them, if you ask me. What’s first place going to get you but ten extra minutes in the airport on the next leg and probably some kind of prize? Who the hell knows which leg has the car prize? For all Travis and Nicole knew, they’d be getting another vacation they have to pay taxes on and maybe even don’t have time to take. It was just their good fortune that a pair of new Fords was waiting for them. In other words, it was a neat move, but it was all for nothing but a mystery prize—granted, one that turned out to be a pretty great one. Or was it? The Survivor car curse is so well-documented that Survivor stopped courting car companies as sponsors altogether. Winning a car doesn’t seem to keep you from winning THIS competition, though. (Just don’t pick the Fiesta, because that’s a zonk prize if ever there was one. If you’ve ever rented a car on the cheap, you know what I’m talking about.)

Before we get to the other half of the U-Turn, I do have to take a minute to commend the Afghanimals for running a competent and complaint-free leg this week. They seemed to drop their facades a little bit and maintained a genuinely upbeat attitude all day. Even when U-Turned, they didn’t waste time grumbling about the unfairness of it all (which I do think a lesser team would have done)—their response was, “well, let’s go do the other one.” Jamal’s sheer joy at the idea of getting to go rafting also made him fun to watch. I enjoyed seeing them living in the moment without being overly focused on how they were coming across to the cameras. We really only saw a couple of brief moments of smugness and/or rehearsed schtick this week. By and large, they were on their best behavior. They’re never going to be my favorite team, but if THESE Afghanimals were the ones we got every week, I’d like them a lot more.

Tim and Marie’s use of the U-Turn had more of an effect on the game as a whole, though if their stated reason for doing it—spite—was really the only thing going on there, the good strategy may have been a little accidental.

Spiteful or not, it was the correct move. Tim and Marie had just made what could well have been that aforementioned epic mistake: they apparently spent more time looking for a very obviously placed clue box than they actually did performing the Detour task that preceded it. By racer estimate, the camel task took 25-30 minutes (depending on whether or not you picked a pretty camel on your first try) and Marie, who is, admittedly, hyperbole-prone, said they looked for the tower for 45 minutes.

Measured in Race time, that 45 minutes could be meaningless, or it could be the difference between being safe and being eliminated. In that time, one or more teams—including the one that was about to hit a Speed Bump—could have very easily arrived at the Detour, powered through a task, found the clue box immediately, and been on their way. (Tim and Marie could pretty safely assume that at the very least Jason and Amy, who were right behind them, were long gone.) For all they knew, nobody got U-Turned and everyone had passed them. Their best option was to hope the team that started the furthest back was still back there somewhere and, knowing the Bunnies also had a Speed Bump coming up, throw them another obstacle to add to a lead that could be a minute or could be an hour. Provided they were still back there, which they were, they were toast.

So much as it’s probably personally satisfying if Marie sticks to her claim that U-Turning Nicky and Kim was simply karma coming back for them, it turns out there’s a big strategic component—intentional or not—as well. Not being last is far more important than being first, at least until you get to the final leg.

This episode’s other saving grace was the opportunity for a few thoroughly delightful character moments. Watching teams cruise around (or ineffectually spin their wheels) in the dune buggies, or cheer on their teammates at the Roadblock, or see their would-be Dromedary beauty queen suddenly go rogue, make the rest of the ride bearable. Even teams who have been mostly boring stepped up and had some charming character moments, from Amy’s meticulous camel-selecting process (and Jason’s hilarious reactions in their confessional) to Ally and Ashley’s tongue-in-cheek toleration of their race-husbands. As we get into the home stretch, we’re going to get to know the rest of these teams pretty well, so the more we get to see why exactly they were cast, the better.