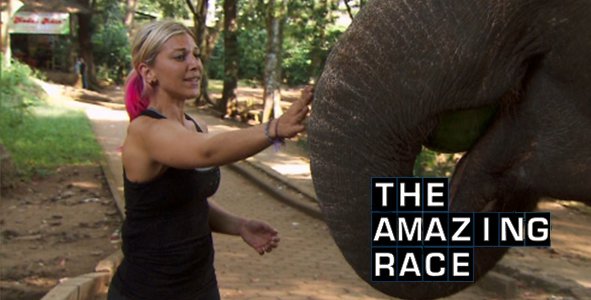 We all wanted to love Travis and Nicole. In a race packed with folks who seemed very conscious of the characters they’d be portraying on TV, Travis and Nicole were a rare spot of down-to-earth normalcy early on. (Never mind that The Amazing Race is not even their first reality show. Only Tim and Danny seemed more like regular people than these two.) It was an especially nice moment in Portugal when Travis exhorted the other racers to pause for just a minute to appreciate the beautiful scenery. And they talked freely about their kids, and their faith, and how they wanted to run a race with honor and integrity—a noble goal.

But here’s the thing about telling everyone you’ve got integrity. It’s a lot like being funny, or being smart—if you have to keep telling people you are, it’s quite possible that you aren’t. The classic rule in creative writing applies to most things in life: show me, don’t tell me. And what Travis and Nicole have shown us is a pretty far cry from what they’re telling us.

This isn’t the first time this has become apparent, either. We saw it when Travis tried to crib off of Marie and Amy at the Roadblock in Gdansk. We saw it when they tried to hide their newly-acquired Express Pass from the other teams right after they first castigated the Afghanimals for lying about the U-Turn. And now we’ve seen it in Nicole’s transparent attempt to cheat off of the Afghanimals’ correctly assembled musical instrument in this week’s Roadblock. This is all spelling out some very uncomfortable things about Travis and Nicole.

To be fair, some of the doctors’ hypocrisy can be chalked up to some really strange editing. The editors can keep showing us us as many times as they like that U-Turning the Afghanimals was mostly about their white lie in Poland—I don’t buy it for a second. It seems highly unlikely that even a team who did have the levels of integrity that Travis and Nicole are purporting to have would be this upset by such a tiny lie that had so little impact on the game. There’s way more to that story than we’re seeing, and it’s infuriating that we don’t have it. (We almost got it last night, it looked like. On the train back to Bandung, the docs seemed about to tell the Ice Cababes something more about their reasoning behind the U-Turn before the Afghanimals showed up.) Nobody but their race wives seems to have had a kind word to say about Leo and Jamal, and I’m dying to know why.

To contrast, actual Race villain Marie’s been saying all along that she’s willing to do whatever it takes to win, and that’s exactly what she’s done. Yes, she’s caustic and devious, but she would be the first person to tell you that she’s caustic and devious. Therefore, Marie might actually have more integrity than the doctors do. If you’re going to be a mercenary, there is absolutely nothing wrong with that—just own it. Better yet, don’t tell anybody what kind of person you are, and let your actions speak for themselves.

(Honestly, I don’t even think there’s anything wrong with copying off of your fellow racer’s paper. Just as long as you don’t also spend 10 minutes in confessionals decrying other people’s way less underhanded actions and proclaiming yourself to be above all of that.)

So am I saying that slipping up and doing something underhanded and/or hypocritical is inevitable? More to the point, can you run a clean race with integrity? Sure you can. One team, at least, has been doing a bang-up job as far as I can tell. You may not have noticed, though, because they haven’t felt the need to tell you all the time. Look at Jason and Amy. We haven’t seen them lie to anybody or take advantage of others in order to get ahead. Jason has said a few slightly uncomfortable things that reveal his insular New England upbringing, but overall, these two have run a pretty good race without really feeling the need to expound on how free of deviousness their race has been. It’s just what they do. The reason they appear to be the most boring team left is because they’re the nicest, most squeaky-clean team left. (The cab-related blowup in Vienna notwithstanding. Granted, Marie had that coming. Also granted, Jason and Amy haven’t been great television since Amy blew up at Marie in Vienna.)

In fact, Jason and Amy might just be too nice. We have spoken before about when it’s best to work together and when it’s best to run your own race. On tasks where you all need to come up with the same answer, there’s no reason not to team up and knock it out together. On tasks where you have knowledge that can be traded for other benefits, go for it. When you know there is absolutely no danger that you’ll be eliminated (i.e. you know for a fact that other teams are hours behind), you can be the best little helper monkeys in all of Race-dom. Help your friends. Help your enemies. Stand on the sidelines and cheer. Yell out instructions. I don’t care. But with the two last-place teams breathing down your neck, it might not be the best call to step in and give one of those teams a hand up. (Especially when that team is consistently neck-and-neck with you on the way to the mat. Wouldn’t you rather fight Ally and Ashley for that slot in the finals?)

Jason said it best—what happens if their cab driver gets lost on the way to the Pit Stop? With five minutes’ delay, Travis and Nicole might pass them. With twenty, Ally and Ashley start to get close. It just didn’t feel like enough of a lead to take a risk that big. They avoided bad luck this time. They might not again.

Fortunately, one other team actually did run completely out of luck this week. The Ice Cababes, who have been, um, skating on thin ice for the past five or six legs, were finally put out of their misery. It may make me a terrible person to say this, but I actually enjoyed watching them implode on the elephant-feeding Detour. For most of this season, we haven’t really seen them do much that would suggest they have a personality. I liked seeing a side of them that wasn’t just them playing off of others’ appreciation for their beauty and/or talking up their jobs as glorified pro sports cheerleaders. (A note to Amazing Race casting: “blonde” is not a personality trait! Cast all the cute girls you want—just make sure there are other reasons to root for them. For every Dustin and Kandice, there’s been a Katie and Rachel. Who? Exactly.)

I can’t think of any way next week is not a non-elimination leg, so let’s hunker down and start getting ready for the home stretch. The editing is suggesting to me that my pre-race pick to win was not wrong, but I’ve been wrong more times than I’ve been right. I guess we’ll just have to wait and see what happens. Until then, if you’re in the U.S., enjoy your turkey day and I’ll see you next month.