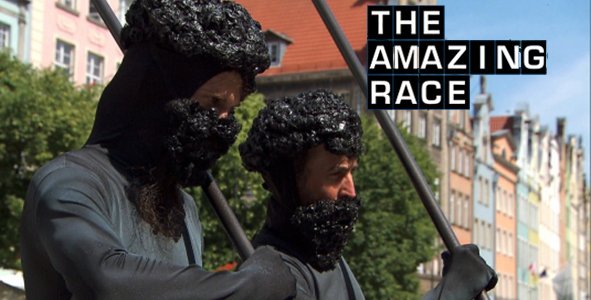 After a grueling leg in 24-hour daylight that took, by the beards’ estimate, about 30 hours, hearing Phil announce last week that the leg wasn’t yet over seemed cruel and unusual on its face. But in the end, the superleg really didn’t turn out to be much of a superleg. In fact, it might be the most rest the teams have had in one go since they started. Given that the teams reported it was around 1 a.m. as they completed the tasks on the last leg, we can assume they checked in at the longhouse at around 3 or 4 a.m. at the very latest. From there, racers went to the Svolvaer docks to learn that the ferry they’d be traveling on didn’t leave until 8:30 p.m. A little Internet research tells me that Hurtigruten’s Svolvaer-to-Trondheim boat cruise is designed such that you can check in, go to sleep, spend a day seeing the fjords, and sleep again, with the boat dropping you at your destination right after breakfast. So yeah, Jason really did say “thirty-four hours,” not “three to four hours.”

To add that up: after leaving the viking longhouse, racers got a 16-hour break in Svolvaer, followed by a 34-hour boat ride, followed by a 2-hour flight before the race picked up again in Gdansk. That’s more than two solid days of transit, two-thirds of which was on a slow-moving boat with private cabins. I submit that this was less of a planned superleg and more of a “teams have to spend a ton of time traveling anyway, so why bother setting up a Pit Stop for them” leg. Call it a non-elimination with no Speed Bump.

Honestly, I don’t mind that much, because I think the Race can always do with more non-plane travel, but if you thought the racers were forced to run for days without so much as a bathroom break or a disco nap, you’re mistaken. This isn’t a David Blaine experiment. Not only that, but the tasks did not seem nearly as tough as last week’s. Given the choice between biting into a dozen donuts or jumping into freezing water, I know which one I’d take every time.

The theme of this week’s leg could best be summed up as, “where are the other teams?”. Racers exercised the most effective strategic moves by understanding their own position in the race as well as that of their opponents. I said last season that self-awareness was a big key to Bates and Anthony’s victory, and it’s already playing a huge role in this race as well.

Let’s start with Tim and Danny, who have gone from totally undynamic on camera before the race to invisible in the first couple of legs to affable, friendly regular guys last week to this week’s outright comic relief. Although the Polka detour’s costumes made me lament the fact that Chester and Ephraim are no longer in the Race, the sight of Danny in a dress being lifted and spun around by his partner was still one of the funniest things we’ve seen this season.

(So in light of various comment threads from last week, I know someone’s going to ask: did I think it was sexist that Danny felt so demoralized by having to wear a dress and “be the girl”? Maybe a little bit at first. But that costume looked a little ridiculous on almost every racer who had to wear it, and Danny looked especially ridiculous in it. It would have been weirder if nobody had said anything. Neither of the Oklahoma boys failed to have a sense of humor about it, and Danny seemed fine once he got used to the dress. I don’t believe he truly felt a threat to his masculinity there. I think he just understood that millions of viewers were about to laugh at him, and eventually he was able to laugh with them.)

When Tim and Danny began to have trouble with the polka, they pondered switching Detours. But Tim observed that Travis and Nicole were still at the Detour, and they weren’t doing any better with the dancing. They’d already noted that a skill-based task versus a task that relied on the good will of locals was probably the smarter bet in general (and I think they were right). They hadn’t been tripped up enough yet to conclude that the polka was well and truly impossible, and they knew at least one other team was still in the mix, so it was worth sticking it out at the task where they already knew the particulars. If Travis and Nicole had gotten the dance right on the first try for reasons that Tim and Danny couldn’t learn from, then they might have been right to switch. But under these conditions, with at least one more task ahead of them and little idea how the other teams were faring at the other Detour, sticking it out was the correct decision. And deploying the U-Turn for extra insurance wasn’t a bad call either, though as far as I can tell they were only guessing that the Afghanimals were behind them.

Faced with a U-Turn, Leo and Jamal asked themselves, “where are the other teams?” and used the other half of the U-Turn on a team they knew to be still at the Detour, thus saving themselves without even having to call upon an encyclopedic memory of BYU quarterbacks. Adam and Brandon, who march to their own drummer on the Race and in life, ended up at the wrong end of the double U-Turn thanks to a poorly-timed Detour switch, and, sadly, that means they’re out of the Race. It’s extra sad to see a team go from first place to last place, particularly when a team is so refreshingly enthusiastic and likable as the Beards. They’ll definitely be missed.

After seeing the anticlimactic resolution to Express-Pass-gate, I have to conclude that the Express Pass is indeed cursed, and I have to commend Tim and Marie for getting out from under it before it took them down. Once Tim and Marie shook the albatross of Express Pass #2 (and, for that matter, Express Pass #1) from their necks, their heads became clearer and their demeanors got sunnier. During the Roadblock, we saw Marie chatting over paczkis with Amy like they were two pals out for brunch and Jason jokingly offering to teach Tim how to polka. Tim’s snarky asides seemed less put-upon and more sardonic this week, too. It was almost as though the Express Pass was like the One Ring, or a Horcrux, sucking positive energy from its bearers until they were able to dispatch it. (Admit it—the image of Marie wielding that Express Pass like Gollum is not at all hard to conjure. “Wicked Travisses! They wants my Precioussss!”)

So all alleged dark energy aside, did Tim and Marie make the right call both times? I’d say so. Let’s start with their OWN Pass. Tim and Marie didn’t actually know where most of the other teams were by the time they arrived at the Detour, only that their cab driver had gotten lost and nobody else was up on the statue podium. Since arriving in Gdansk, they’d only seen the Iceghanimals, and even THEY weren’t in sight at the time, having opted to polka. Everyone else could be even more lost, they could all be doing the polka at the other Detour, or they could be already done with everything. There was no way of knowing. The only teams they knew for sure were racing for last against them were teams who didn’t like them and would not U-Turn each other, and everyone was about to run right into a U-Turn. This was absolutely the correct time to use their Express Pass.

And as for the second Express Pass, well, depending on how you count the superleg, it seemed like this was the week in which they HAD to get rid of it, so it was going somewhere. Not that they particularly cared about being seen as a team who stuck to their word, but again, everyone knew a U-Turn was coming up soon, and it was probably best not to try to weasel out of a deal with a team who was very likely to be in a position to U-Turn them. So good for Tim for finally making a visible strategic move and insisting they pass the Pass to the doctors (and good for Marie for not shouting him down). Absent the Sword of Gryffindor or the Fires of Mordor, honoring this bargain was the right call.

If you guys thought that Marie was the Race’s only villain, though, you haven’t been paying attention. There’s one other team out there whose mercenary mindset surpasses Tim and Marie’s. We caught a major glimpse of it at the end of the last episode when Nicole demanded the Express Pass in return for help with navigating, and we saw even more of it this week during Travis’s Roadblock performance. As Kim exited an apartment and hit the button for the elevator, Travis leapt down the stairs, pressing the call button on each floor to extend her wait time. This sort of petty mischief recalls Boston Rob paying a bus driver not to open the front doors of a bus until he’d already gotten off. As we learned from the Marianos in this show and that other one they were on, there is a real art to screwing someone over and being charming enough in the process that they’ll laugh it off, as Kim just did. Travis continued to play the “charming bastard” role as he convinced Amy and Marie to allow him to work with them shortly thereafter, mere minutes after they realized he was following them.

Mark my words—Marie might be making big moves and she might be loud about it, but she’s not the most effective villain in the Race. Travis and Nicole are the team to watch. In terms of sheer athleticism, Tim and Marie (and maybe even Jason and Amy) have them beat, but that’s the only minor disadvantage they’re bringing with them. PLUS, they have an Express Pass now. It’s their game to lose.