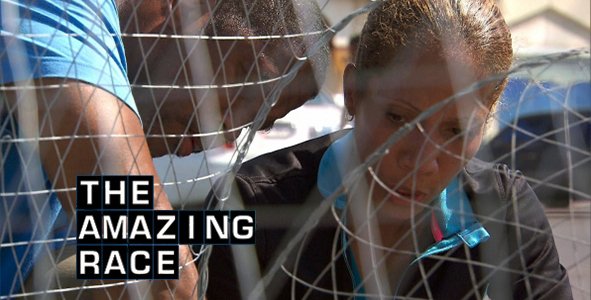 Look, Amazing Race, I know every show can’t be a total barn-burner, but if you really want to keep your audience’s enthusiasm at a baseline level for the entire season, maybe there are some things you could be doing differently.

I understand that not every leg can be packed with grueling tasks designed to push racers to their absolute limits. Every good story needs rising action and falling action. But you’re never going to convince me that this leg was a particular challenge for anybody when the leg included “ride a luxury yacht” as a Route Marker task. You’re just not. Sticking two relatively unrelated (but pretty fun-looking) tasks together to form one Roadblock didn’t really add to the excitement, either. In a place with infrastructure as solid as Abu Dhabi, the powers that be would ideally balance the relative ease of getting around with tasks that are a notch higher, difficulty-wise, especially this far into the Race. When nobody’s getting eliminated, it’s doubly important to make things interesting, because there’s not going to be the payoff of jettisoning one more team at the end of the leg.

Marie teased on Twitter that Abu Dhabi was the site of an epic tantrum.[/caption]

And some of this, to be perfectly fair, is down to editing, not game design. Marie teased on Twitter that Abu Dhabi was the site of an epic tantrum for her, but apart from a few moments of typical snippiness from her at the date task, we didn’t actually see all that much of Tim and Marie this week. The main sources of narrative tension the editors decided to go with this week? 1) Some of the dates were over HERE, on THIS table; 2) Nicole tied some knots incorrectly; and 3) Nicky and Kim missed a boat and had to wait 15 minutes for another one. Maybe I’m expecting too much suspense because I’m coming off of having seen Gravity on Saturday night, but boy did everyone seem to be going through the motions this week.

But let’s work with what we were given, I guess.

1) Some of the dates were over HERE, on THIS table: Shocking as it may be that they’ve ever had trouble finding a date, the Afghanimals were having some trouble locating all of the necessary dates to fill their date plate when they first arrived at the Detour. Meanwhile, Nicky and Kim found a secret stash of fruit and seemed to be gaining on them.

As with the First Class lounge debacle in Santiago, Nicky and Kim found an advantage, realized they had nothing to gain by sharing the wealth, and kept it to themselves. The Afghanimals had nothing the Bunnies needed, and thanks to flight luck they had a ten-minute head start on the task besides. As for helping anybody else at the task, the Bunnies already found out what happens when you open that particular can of worms around Tim and Marie. Best to just pretend they didn’t realize the other teams didn’t know about the extra dates and wait for them to figure it out on their own.

Working together does sometimes make sense, especially on tasks where teams can share one success without doubling the workload. (The compass task in Portugal is a great example of this.) But since everyone had to turn in their own date platter, the Bunnies had little to gain by telling the other teams about the hard-to-find dates.

2) Nicole tied some knots incorrectly: Meanwhile, over at the fishing net detour, the two most quietly competent teams in the Race were …being quietly competent. Jason and Amy, fresh from having apparently mended fences with Tim and Marie (or at least Tim), complained about the heat a little but finished quickly, leaving Travis and Nicole alone.

Now, being left alone at any point in the Race can be a very scary thing. If you don’t know where any of the other teams are, you can’t prove you’re not at the back of the pack. Being all alone on the course might end up perfectly fine for you (it happened to Abbie and Ryan in Bangladesh in Season 21) or it might mean you’re toast (as happened to John and Jessica last season). It can be very hard to tell. It’s the same conundrum Tim and Marie faced in Portugal. For all the docs knew, everyone had breezed through the other detour and left them in the dust.

We have learned over time that that’s not necessarily a realistic conclusion to jump to with this specific bunch of racers, but jump to it they did, and we saw the first cracks in Travis’s usually cool exterior once Jason and Amy left them at the detour. Faced with the prospect of being in the back of the pack for the first time all race, frustration got the better of him and he, by his own definition, exploded at Nicole. Nicole, visibly panicking that she’d mistied the knots, also lost her cool a little, and for the first time, they pondered using their Express Pass.

We may have discovered the one flaw in the docs’ armor: they really, really hate to be in danger. To be fair, Travis exploding is still calmer than Marie in a good mood, but the second they thought they might not have complete control over their situation, their game took a serious tumble.

3) Nicky and Kim missed a boat: If we had to choose only one event that shaped the outcome of this leg, it most certainly turned on the fact that Nicky and Kim wound up 15 minutes behind everyone else due to missing their boat by what looked like seconds. (You never know how close they REALLY are, but it was no more than a few minutes in any case.) They almost managed to make up all 15 minutes of that deficit by the time they hit the mat, but it didn’t end up being quite enough. Had they made that boat, there’d be no question it’d be the Ice Cababes facing that Speed Bump next episode.

I do enjoy that the Race has basically bestowed a double whammy (if not a triple) on every single racer with a fear of heights this season. Jason pointed out that before the race, they’d agreed that Amy would take the height tasks, only for him to end up being the one who paraglided, jumped off a bridge, AND rappelled. He’s responded to this with quiet resignation most of the time, but you can tell it’s making him cranky. He seemed pretty relieved that he didn’t have to bungee jump last week, even though it meant they didn’t win the Fast Forward.

Kim’s luck has been similar, with the added bonus that she doesn’t much care for race cars either. But every time, she’s powered through a task she’d really rather not do with minimal fretting. Certainly there’s more to the Baseball Bunnies than the tea-sipping, stretching, and makeup-applying Marie ascribed to them, and hey, they’re making the show more interesting just by virtue of irritating Marie. With their positive attitudes and sharp strategic minds, they’re actually kind of fun to watch, especially compared to the relatively bland (and nearly invisible) Ally and Ashley, who have done almost nothing this race but lag around in the back of the pack and occasionally get objectified by the Afghanimals.

Is it foolhardy to spend so much time praising a team that just got slammed with their second last-place finish? Maybe, but remember that luck is a very important component of any Amazing Race, and recall that just this summer, on TAR: Canada, we saw a team get saved by two non-elimination legs and go on to win the whole thing. I don’t think they are necessarily a credible threat to steal the Race out from under one of the three couple teams, but we could well see the Bunnies stretch, sip, and sneak their way into the finals.