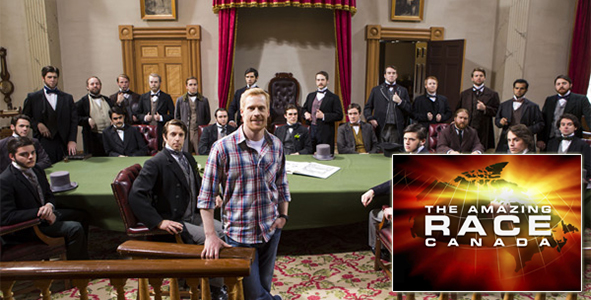 As we head into the penultimate leg of Amazing Race: Canada tonight, it’s worth taking a closer look at the relative strengths and weaknesses of our final four teams – not just the actual ones we’ve seen in action, but the ones that TAR:Canada‘s editors have chosen to highlight as they cobble together the story of how one of these teams won the whole thing.

All four teams have shown a remarkable variety of strengths and weaknesses, and all four have given us reasons to root for them – whether you’re most swayed by Sukhi and Jinder’s keen problem-solving skills, Meaghan and Natalie’s sheer beast-mode-osity, Mickey and Pete’s character moments, or Rob and Ryan’s tenacity, nobody’s going to have trouble finding a horse in this race. So let’s try to make some educated guesses about everyone’s chances. 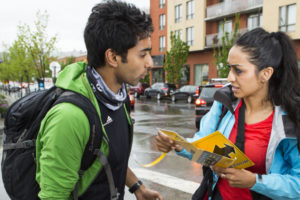 Sukhi and Jinder are better racers than we thought.[/caption]

Anybody who says they predicted these two would make the final four is either lying or has been lurking on Reality Fan Forum. The Atwal siblings started out as the season’s inept comic relief, giving us at least one giant blunder per episode. Whether they tried to drive off without closing their hatchback or begged the other teams to help them finish a task, the message was clear: Sukhi and Jinder are in over their heads, and they’re not long for this race.

Well, that’s what we’ve been fed for lo these ten legs, anyway. If you were too busy laughing at their antics, you might have missed the fact that Sukhi and Jinder have never dropped below fourth place since their non-elimination leg way back in Macau. Their big strategic moves are rarely more than mildly distracting, and their tornado of chaos might annoy the other teams, but when it counts, they’ve managed to keep it together and blow past the competition. Given the right combination of tasks, not only are they contenders, it might not even be close. In particular, given her performance on the matching-coins-to-flags Route Marker and last week’s Founding Fathers roadblock, I think letting Sukhi anywhere near a final memory task is a really, really bad idea.

The bartender bros reached the front of the pack right around the same time Sukhi and Jinder were fighting their way out of last place, but their moment in the sun was short-lived. They’ve never fully recovered from getting lost in Normandy. Still, they’ve kept a positive attitude even when they’re hours behind all of the other teams, which counts for a lot. Plus, they’ve been able to bounce back from last place twice, at one point pushing past a Speed Bump AND a U-Turn, and neither one of their Speed Bumps has been a walk in the park. Task-wise, they’re well-equipped to handle almost anything, provided they can find their way TO the tasks.

The Race has shown us time and again that anyone who makes it to the last leg has a chance to win it all, and getting saved by two non-elimination legs worked pretty well for the Tims last year, but I’m not so sure lightning can strike in the same place twice. Although we recently learned about Ryan’s triumph over cancer, the fact that we saw almost nothing of them until midway through the race doesn’t necessarily make a Rob and Ryan win seem like the most satisfying thing on the planet. Don’t get me wrong, I’d love to see Ryan and Rob take home the prize, but I don’t think that’s the story we’re being told. More likely, these guys go out in the cursed fan-favorite fourth place slot. I think if anybody’s spinning an underdog story, it might be…

Though they were sold to us as a more laid-back version of Jet and Dave, Mickey and Pete have definitely not dominated the screen in quite the same way. Where latter episodes of TAR:Canada 1 all involved Jet and Dave kicking everyone’s ass and/or providing running commentary, Mickey and Pete’s race performance has been fairly middle-of-the-pack, and their dude-cabulary has proved a little too one-note to give them sole claim to the comic relief title. It was hilarious the first time they were totally stoked to do a task. Less so the eighth.

Which isn’t to say they aren’t still fun to cheer for, or that we haven’t learned quite a bit about them along the way. In fact, our Mickey and Pete trivia stores are suspiciously vast, if you ask me. We’ve learned about Mickey’s oddly rich past as a high school track star, accounting whiz, and cosmetology enthusiast. We’ve learned that the two of them came from pretty humble origins, and they don’t make a lot of money running their adventure park out there in the woods of Ontario. And we’ve seen them lament the fact that they’re the only team left who’ve never won a leg (even though Ryan and Rob would beg to differ!).

For a team who has yet to win a leg, we sure do have a lot of reasons to want them to win. The editors may well be setting their story up to end with a surprising (and supremely satisfying) victory for the underdogs from Muskoka. Bottom line: everything we’ve learned about Mickey and Pete paints them as unlikely winners, but definitely not impossible winners.

Meaghan and Natalie are still, unequivocally, the team to beat. They haven’t just racked up the most first-place finishes of any team this season, they’ve racked up more first-place finishes than any other Amazing Race: Canada team, and more than 99% of all Amazing Race teams everywhere. They’re physically strong, they’re smart, they’ve got tons of competitive drive…the only reason not to root for them is because, frankly, their win would be the most predictable and boring outcome.

Almost too boring, if you ask me. TAR:US wouldn’t have any problem telling the one-note story of how one team totally dominated the others all the way to the end and then won the final leg, too, but we’ve come to expect more from our neighbors to the North. Their commitment to great storytelling makes it a little hard to believe that a victory from the strongest, most dominant team is really all we get. It seems highly likely that Natalie and Meaghan have been set up for a fall. If they were going to win, I think the editors would have shown us a lot more of their stumbles.

What could possibly go wrong for the Golden Girls? Meaghan. Meaghan could go wrong. Even though Nat’s the one who vomits under pressure, it’s Meaghan who gets game-threateningly tripped up when things don’t go their way. We saw it as early as the dancing task in Macau, when she started to panic over not getting the steps down and insisted they stop right that minute to watch again. She seemed to get in her own way on last week’s Founding Fathers task as well, and in the kerfuffle with Sukhi and Jinder on the mat, it was Meaghan who came off looking the worst. In all fairness, Natalie could certainly be more patient when Meaghan starts to lose her cool, but anyone who’s got Spooner and Mikkelson pegged as totally indestructible is underestimating this game’s ability to get under people’s skins.

It must be said, though, that just like this time last year, there’s no loss here that would disappoint me. My pre-season pick is looking pretty good, but whoever crosses that finish line first will absolutely have earned the title. It just remains to be seen whether this is an underdog’s tale, the story of a team that started great and stayed great, or a study in how a team learned and adapted along the way.

Tune in later this week for our usual podcasting fun times as we RHAP up episode 11 (as well as episodes 8 and 9 of Amazing Race: Australia vs. New Zealand).  And, of course, with TAR:US’s 25th season right around the corner, Rob and I will soon be bringing you all the coverage of Original Recipe TAR that you could possibly want!