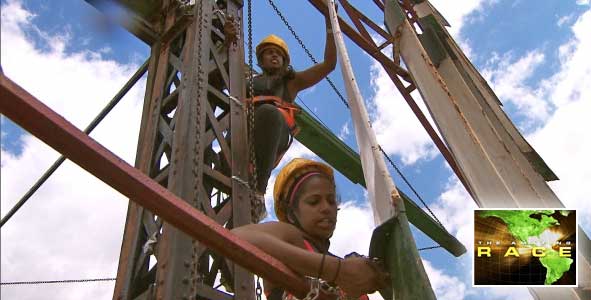 After observing nearly 21 seasons of this show (plus the odd episode of a foreign edition or two) it has become abundantly clear to me that there are a few specific skills that every team should acquire well in advance of beginning their Amazing Race. Get comfortable swimming, riding a bike, eating meat, jumping off of high things, running with a heavy backpack. But chief among these skills is and always will be: learn to drive a stick shift. Natalie and Nadiya discovered this week that an hour is not enough time to master the skill, as their tricky little Ford Focus sent them to the back of the pack. (And personally, if I were going on the race, I’d actually go out and rent a Ford with a manual transmission. This endorsement deal doesn’t seem to be going away anytime soon.) To add insult to injury, the very next lesson they learned was that weaseling your way out of your tennis lessons doesn’t pay either.

In an early leg of the race, it’s entirely possible that a few early bumps on the road to smooth manual-transmission cruising wouldn’t have mattered at all. Chances are other teams would have made the same mistake, and a competent Detour performance would keep them out of harm’s way. But the margin of error gets narrower as the field of competition gets smaller and smaller, and a small hiccup in leg 2 can be a game-ending catastrophe in leg 10. Hopefully Team Twinnie can shake it off and get back into the race, but even a hiccup like a Speed Bump is harder to overcome when there’s only three other teams left.

This week’s non-elimination leg was not a shocker to anybody who’s noticed that next week’s finale is two hours long. Three teams can’t carry a two-hour finale. In fact, it’s kind of rare that any number of Amazing Race teams can carry a two-hour episode. In the past, two-hour episodes have often contained a lot of footage of roads and airports. We can only hope that this year’s extra hour is due to a surplus of amazing footage, and not due to CBS being short a rerun of The Good Wife.

Also not a shocker? The fact that the Beekmans caught up. Race brass had to give the other three teams an entire extra day off to engineer it, but there was no way they weren’t going to hit the reset button one more time before heading into the home stretch. Newer fans might find this surprising, but long-time viewers have seen teams overcome even bigger gaps than this. I’m calling it now – everyone’s going to be on the same flight to their final destination.

As the finish line comes into focus next week, and with a plethora of potential hiccups yet to be encountered, it’s really anybody’s game.

I told Rob in our recap podcast last week that you can’t count anybody out, no matter how hard they appear to be actively trying to lose sometimes, and I stand by that. The Beekmans said it themselves – they are hard to kill. Between letting the injured guy do the extremely physical roadblock and bickering nonstop as they attempt to navigate roundabouts, I’m pretty sure nobody has them at the top of their “likely winners” list, but they’re still hanging in there, and they are no longer hours behind. Also, they’re the only team left who knew how to pronounce “Mallorca,” for what that’s worth. If Josh’s ankle holds up and they catch a few more lucky breaks, they could pull out a win. Sure, it won’t be satisfying, but it isn’t looking as impossible as it was at the end of last week. We could very well be seeing a much bigger and fancier windmill on the Beekman property come next spring.

What would be the most satisfying? Well, the Chippendales certainly give the impression that nobody wants it more. They are most definitely the team to beat – they’re physically strong, they’re charming, and perhaps most importantly, they are the only remaining racers who haven’t gotten into any major arguments with each other. There’s no conflict within Team Chippendale. They are running as one well-oiled and well-muscled machine.

Trey and Lexi started out as largely unmemorable – the token “attractive young dating couple from an SEC school” team that the Race seems to have every year. (Okay, to be fair, sometimes they mix it up and go with a Big Ten school.) But they’ve made few mistakes, and they’ve quietly managed to win three of the last five legs. Who else has won three legs this season? Nobody, that’s who. But Team Texie’s guilelessness keeps them from seeming like much of a threat. If they were a Survivor contestant, you’d call them under the radar. We saw what might be their only potential weak spot tonight when what looked like a fairly small finger-cut drove Lexi to histrionics. Okay, to be fair, fingernail injuries do tend to be disproportionately painful. Still, we’ve never seen Team Texie meet with major adversity, and the fact that they’re largely untested might spell their downfall. But if they remain lucky, they’re a lock to win. Certainly their victory would be the least interesting, but it wouldn’t be undeserved or surprising.

But of course I have to continue to root for the Twinnies, my episode-one pick. They’ve never finished worse than sixth place and they’ve proven over and over that they’re one of this season’s strongest teams. I’m sure they’ve got enough eardrum-busting gumption left to propel them to a solid finish, even with a Speed Bump awaiting them. Let’s just hope they haven’t neglected any other vital Race skills while they were avoiding their driving and tennis lessons.

Next week, I’ll live-tweet from TARcon, the absolutely incredible fan-organized finale party that happens each season in New York. If you’re planning to attend, please come find me and say hello! There are no guarantees that I’ll have a chance to chat with any of the racers, but if the opportunity does arise, I’ll be sure to pass along greetings from the Rob Has a Website community.