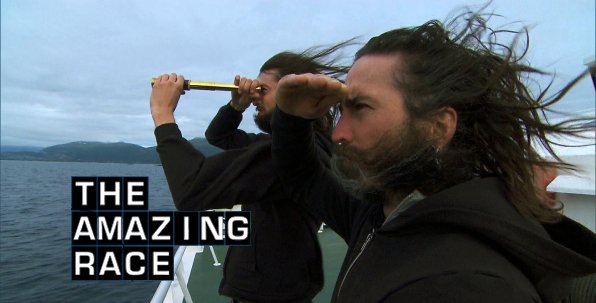 From a purely Race-design standpoint, there was not a more opportune time than this week to insert a superleg into the competition. Usually when legs get super-sized, you have this pesky thing called nighttime that forces you to set up floodlights at every location. Not in Arctic Norway! The 24-hour daylight not only disorients and further exhausts our racers, it makes it easy to film no matter what time of day it is. Frankly, I’m surprised it took them 23 seasons to think of it.

Tim and Danny powered through what was clearly the harder of the two Detours.[/caption]

We saw a bit more of Tim and Danny this week as they powered through what was clearly the harder of the two Detours to overtake the clearly struggling Baseball Bunnies and briefly confused a kilometer with a kilogram (oh, Race Brain…). The fact that we’re suddenly seeing a lot of them, coupled with the fact that they’re going to be starting in the back of the pack next week, makes me a little concerned for their future in this race. Suddenly, out of nowhere, they got a lot of camera time and a bigger story. It could just mean that they didn’t actually do much in the early legs but emerged as big characters once they picked up speed…or it could mean the editors are trying to make us care about them ahead of their elimination. (The death knell will be if they start talking about their personal lives very early in the next episode.) But if that’s the case, it’s working—I do like them, and if they’re out soon, I’m going to be sadder than Ashley was when she found the baby fish head.

You know who we didn’t see much of this week? Apart from Jason and Amy, I mean. (Technically, I did see them, but I’ve forgotten what they did again already.) We didn’t see much of The Iceghanimals. We caught a few minutes of the girls being grossed out by their fish heads, and we saw Leo and Jamal struggling with a broken wheelbarrow, but we didn’t see “hello Race wives!” or “let’s all do the task together!” And I’m more or less fine with that. It won’t be like this every week—soon we’ll either witness the inevitable dissolution of the Race marriage (hope against hope!), someone will butt heads with Tim and Marie again, or enough other teams will be gone that Leo and Jamal’s incessant mugging will once again take center stage—but for now I’m enjoying the opportunity to see more of the other teams and less of the contrived showmance.

Like the Oklahoma boys, our other team of longtime bros, Adam and Brandon, also seemed to step into the spotlight a bit more this week, but there didn’t seem to be as much of a hidden downside to their easy first-place finish. It turns out that in the middle of the night in small-town Norway, hoofing it a mile or so might get you where you need to go a bit faster than waiting for someone to drive you there. Their willingness to hit the ground running once they were sure of where they were going should surely earn them a Man Scout badge. (Not saying everyone should be going everywhere on foot all the time, of course.) And if I went on the Amazing Race and I had half the fun they seem to be having, I’d consider that time well spent. It’s hard not to root for attitudes that positive.

And if their upbeat attitudes and surprising competence didn’t sell you on Team Beard, you had to cheer for them when they told Tim and Marie where to stuff their Express Pass. Similarly, good for Nicole for telling Tim and Marie to hand it over or figure things out on their own. By this point, half the teams know that Tim and Marie hate them and will never give them the Pass, and the other half are too smart to waste time trying to curry favor. No amount of game advantage is worth the level of kneecap-sucking that they seem to want. If everyone flat-out refuses to play their game, they aren’t going to get any more mileage out of this. Everyone knows that you can absolutely win this race without an Express Pass (in fact, most teams do!), and if you spend too much time looking for shortcuts, you might lose track of the actual race course.

But let me insert a little digression about Tim and Marie here. It’s fair to say that of the two, we know Marie much better at this point. All we’ve really seen so far of Tim is the occasional snarky aside about his partner and the fact that when he gets sweaty, his hair stands up like a Final Fantasy character’s. However, when we’re talking about actual Race strategies and events where we didn’t explicitly see that an event took place at the hands of only one team member, I’m going to be careful to discuss, for instance, Tim and Marie’s Express Pass strategy, and Tim and Marie’s failure to notice the marked poles for fish-head-hanging, and Tim and Marie’s inability to find the next Pit Stop. (Versus, like, “Marie’s explanation of the team’s Express Pass strategy” or “Tim’s performance at the Roadblock.”)

Why the hair-splitting? To do otherwise is unfair to both members of the team. I don’t believe this is a Flo and Zach kind of situation where Tim has been shanghaied into running a quietly competent race behind a partner who’s making his life difficult by stirring up shit at every opportunity. Nor do I think it’s a Rob and Amber situation where one team member is abrasive and manipulative and the other one rides coattails (or lets their partner take the heat while they strategize behind the scenes, depending on who you ask). I think Marie may well be the more vocal of the two in general, and I think other teams may well see her as more of a villain than Tim. But I also know that reality TV editors love a domineering bitch, and what we HAVE seen of Tim doesn’t seem to suggest that he’s not in her corner. True, they can’t air it if you don’t say it, but they can choose to not air things you DO say, and I think Tim might be saying more than we’re seeing.

Do I think Marie has a very strong personality? Of course. Would I myself want to run an Amazing Race with her (or against her)? Probably not. But I’m not going to pile 100% of the blame on her for the way her team is playing the game. She is only half of the team, after all. If we do see Tim questioning Marie’s strategy at some point in the future, I reserve the right to revise this stance, but right now I haven’t seen anything to suggest that Tim and Marie are not a united front—on the Race, if not in life. So it’s Tim and Marie’s Express Pass, not Marie’s Express Pass. It’s Tim and Marie’s confrontation. And it’s Tim and Marie’s strategy.

And it’s Tim and Marie’s failure to pick up part of their clue after the product-placed Ford route marker. I expect that will come back to haunt them sooner rather than later. In previous seasons, teams who have neglected to pick up a clue have been sent back to retrieve it if they’re within driving distance, or made to serve a penalty if they aren’t. Whether Phil will refuse to let them move on to part 2 of the superleg before getting the clue or he’ll zing them with it at the very end of the leg is anyone’s guess, though.

One thing, however, that is solely and uniquely Marie’s: her vision of how this Race is going. In Marie’s world, she has spent the whole Race being “nice to everyone.” If that’s nice, I’d hate to see her get mean. And by “hate” I actually mean “love,” because I’m not actually out there with her, I’m at home on my couch waiting for drama to happen. Perhaps we have not yet begun to see mean from Marie. As the confrontation with Travis and Nicole reaches its climax, or once they discover their clue error, Mean Marie might just come out to play. And that might be some great television.