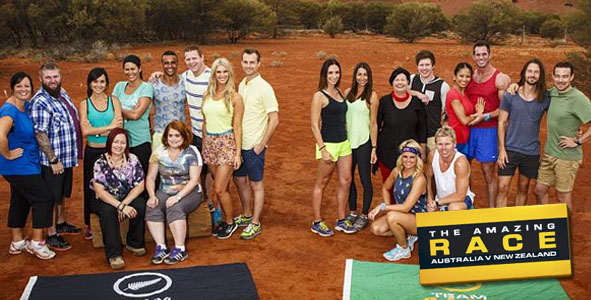 The toughest battle the cast of Amazing Race: Australia vs. New Zealand has fought has not been against killer fatigue, culture shock, or tough tasks, but against Australia’s laissez-faire approach to TV scheduling. Nobody knew the start date, start times could be anywhere from 5 minutes to an hour behind schedule, and Seven started doubling up on episodes midway through the season to burn them off, which might be fine with crazy folks like me, but for normal viewers, it was probably a little bit too much to watch all at once.

Which is a shame, because while this season didn’t quite live up to the memorable characters and nonstop suspense of Season 2, it was a solid season from start to finish.  We got great destinations, fun feuds, and the shocking back-to-back eliminations of the two strongest Kiwi teams. In Jesse and Cat we found likable underdogs, John and Murray were villains whom we still kind of loved, Aston and Christie became the first team in TAR history to tell someone to eat a dick, and Elizabeth of all people provided some of the funniest trolling the show’s ever seen. In other words, it was still far better than most of the recent U.S. seasons.

As Season 3 heads into the home stretch, let’s take one final look at our finalists and assess their chances at taking home the quarter mil.

So many things could go wrong for the puppy and the veterinarian.[/caption]

I’m sticking by my pre-game evaluation of Sally and Tyson as the Jason and Amy of TAR:Aus. They’re incredibly sweet, perpetually upbeat, and they’re good racers…but not necessarily dominant ones. They, like (fellow recently engaged couple) Jason and Amy, were competent racers whose continued presence wasn’t particularly noteworthy, but it was kind of shocking when we realized they got the “we still haven’t won a leg” foreshadowing sound byte relatively late in the Race.

Obviously, Tyson’s size and strength have proved invaluable when it comes to the physical tasks, though they seem to have demolished most of the non-physical tasks as well. After a slow start, they’ve managed to learn from mistakes and slowly work their way up to the front of the pack, where they’ve stayed for most of the second half of the season.

But am I sticking by my pre-game assertion that these two are going to win The Amazing Race? …eh. Maybe not. There are just so many things that could spell doom for the puppy and the veterinarian. Sally, who thought Portugal and Mexico were in South America and didn’t know whether or not Shakespeare was from Argentina, is widely regarded as the brains of this operation. They could certainly get bogged down by a memory challenge or a puzzle. And then there’s Tyson’s perpetual need to hydrate and, of course, his corresponding perpetual need to do that thing that excessive hydration makes you do. If this team fails to win the race because Tyson’s off christening a tree somewhere, nobody would blame Sally for giving back that engagement ring.

Realistically, though, as long as Tyson’s bladder cooperates, they aren’t the darkest of dark horses. A win from Sally and Tyson would not seem undeserved – or, indeed, totally unexpected. And that cash would pay for one hell of a wedding.

As advertised, Ashleigh and Jarrod have been one of the star teams of the season. Jarrod plays the role of belligerent bogan to perfection. Given that there was a pre-season promo devoted to Jarrod’s love of the adjective/adverb/all-purpose-expletive “bloody,” (an ad that you may have noticed included footage from as late in the race as the final 5) seeing them make it to the finals isn’t shocking. If it hadn’t been for Jarrod’s enthusiastic patriotism, we might have even forgotten the show was Australia-vs.-New-Zealand-themed every now and then.

I’m sure I don’t have to tell you guys the main reason Ash and Jarrod don’t seem destined for a win, especially if you just watched The Amazing Race: Canada, where the winners really did get a winners’ edit. Ash and Jarrod just haven’t been made out to be a team you’d want to win. At every turn, these two have been painted as either buffoons or unsympathetic. Their fellow racers don’t seem to want to work with them, they don’t seem to have as showy or as tight a romantic bond as Tyson and Sally (or Cat and Jesse…or, for that matter, Jono and Emily), and perhaps most importantly, they don’t seem to get confessional time devoted to anything other than what just happened onscreen.

If this were a redemption arc for Ash and Jarrod, wouldn’t we have seen them talking about what they’d do with the money, or treating each other with lots of affection (implied story: “nobody else gets us, but we get each other”), or telling us anything at all about what their lives are like off the race? There are ways to tell the story of an Ash and Jarrod win, if one’s about to happen, but these aren’t the stories we’re being told.

In a universe where Australians loved their TAR and we were eventually going to get an All-Star season, these guys would be a lock for a second try, but on this go-round, at least, they’re not going home with the money.

Like Shane and Andrew, and Tyler and Nathan, before them, Daniel and Ryan have run a low-key, low-drama race, avoiding conflict and breezing through challenges that left other teams frustrated. Coming into the race, they swore they were just there to have fun, but the nurses showed an aptitude for logical problem-solving and grace under pressure that made them top contenders.

Everyone seems to love these guys, even as everyone acknowledges what a threat they are. They’re the only team in the finals who’s won more than one leg. They are physically fit, they get along with each other well, and they have proven that they’re willing to risk it all (even when “it” includes their hair and their dignity) to come out on top. They want that win a bit more than they claim to, I think.

Though they’re strong, smart, and social, this team has one pretty big blind spot that could cost them the Race. Dan and Ryan’s biggest weakness is their lack of navigational skills. If the last leg is at all dependent on self-driving, their chances go way down. Even George the cab driver was better at getting them from Point A to Point B than they’d have been on their own. But if self-navigation is largely a non-issue, Dan and Ryan’s win is kind of a foregone conclusion. It won’t be quite as suspense-free as Nathan and Tyler’s win in Season 1, but it’s certainly not going to be a nail-biter.

So, with the benefit of having watched the entire season, and having followed the character arcs of each team, here’s my prediction for Thursday night:

Tune in this weekend for the final Amazing Race:Australia vs. New Zealand (and, indeed, 2014’s last TAR:International) RHAP-Up podcast!