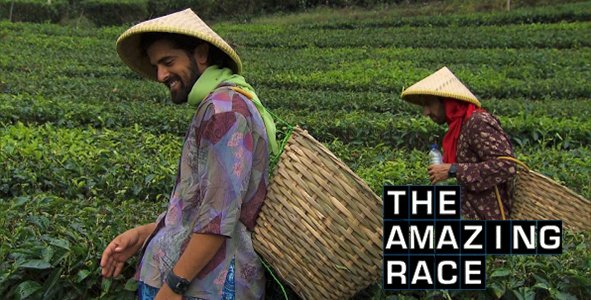 Going into the final leg of Season 23 of The Amazing Race, I have to say that I’m kind of surprised to see the four strongest teams make it all the way to the end. There’s usually a head-scratcher of a team who sneaks by the rest like the Beekman Boys, or a shocking early elimination like John and Jessica. The elimination order on the whole this season hasn’t been 100% logical, but it hasn’t been particularly illogical either, and if we’d done power rankings before this season started, the four strongest-looking teams would undoubtedly be the four teams who are still in the running. Nobody else had a prayer.

At this point, even without the standard disclaimer that it’s always anybody’s game, I have to say that it’s looking like a pretty close race. And while the season has been mostly predictable, a predictable early race means a closer late race, and close races are unpredictable races. So I’m anticipating a less-than-boring finish. Sure, there are a few hints from social media and discussion boards that suggest a couple of more likely outcomes, but a win from any of these teams would make perfect sense in light of their performance thus far.

Jason and Amy had never won a leg.[/caption]

Every week, I’ve found it pretty hard to remember that Jason and Amy had yet to win a leg. They project such an aura of competence and serenity (well, as long as Providence Amy remains under wraps) that you just assume they’re one of those powerhouse teams with a bunch of Travelocity trips under their belt. It was a shock, then, to remember that this week was the first time they’ve hit the mat in first place. Not only do they do well in challenges and navigate competently, they are extremely comfortable with each other. Travis and Nicole tend to come unglued easily, the Afghanimals are known to snap at each other, and Marie tends to explode outward in all directions when faced with a frustrating situation…but Jason and Amy have never been more than mildly irritated with one another. They seem perfectly secure with one another whether they’re doing well or doing poorly. The one time we’ve seen them lose their temper, it wasn’t at each other, but at Marie, and they seem to have forgiven and forgotten, more or less. This kind of unflappability should continue to serve them well, in and out of the race.

Travis and Nicole’s chief skill lies in their ability to make alliances. They’re clearly really tight with Jason and Amy, and they have a decent relationship with Tim and Marie as well. However, they seem more internally combustible, and they aren’t particularly kind to each other in pressure-filled situations, which could prove problematic. At the egg-boiling Roadblock this week, all it took for Travis to decide he was (prematurely) ready to have his eggs checked was a casual lie from the Afghanimals that I’m pretty sure he didn’t even actually believe. Both he and Nicole get flustered when things don’t go exactly their way, and the Race is about to get even less forgiving of that.

Tim and Marie are probably the most versatile team left. They both bring a huge variety of strengths to the team, and they’re almost all different strengths. Tim is physically strong, creative, and has built strong relationships with almost every other team left. Nobody’s got a bad thing to say about him. What Marie lacks in social graces and a complex palate, she makes up for with strategy, relentless energy, and self-awareness. And just like you’d expect from a kickboxing instructor, she can be a hardass when a situation calls for it. More than that, though, they have a very clear understanding of what the other brings to the table. Marie knew to give Tim the music-related task last week even though it wasn’t his “turn,” and Tim knew exactly how Marie was messing up the egg-boiling Roadblock, even when he couldn’t see her. They seem to know each other better than the team that’s been married for more than a decade, the team who’s actually still in a functioning relationship, and the team of relatives who’ve grown up together. They may have been horrible life partners, but they are pretty excellent teammates.

In fact, nobody’s playing with absolutely zero social game. Even the Afghanimals have found a comfortable routine where their relationships with the other teams, and indeed, the audience, are concerned. Beginning sometime during the last three legs, they’ve started to mellow a little. I don’t know if it’s the fact that their race wives are gone, or just a simple matter of hitting their stride, but it’s enabled them to reach a tenuous state of detente between them and the three couples. Any remaining vitriol appears to have evaporated. They’re not BFFs with any of the other teams, but they’re able to carry on a relatively tension-free conversation. Whatever they did to piss people off early on, maybe everyone’s getting over it. (I still want to know what it was, though.)

For at least the first five legs, most of their interaction with the cameras and others seemed overly rehearsed, and they came off as a little anxious about how the cameras were seeing them. And to be perfectly fair, the Race’s other villain, Marie, suffered from exactly the same thing. I have little doubt that both Marie and the Afghanimals are naturally funny and entertaining when there’s no camera pointed at them. It’s why they were cast. But once there’s a cameraman, a sound guy, and undoubtedly a handful of production staff gathered around you telling you to be funny and entertaining, I can see where you’d feel like you needed to make an effort. Hell, I was the same way myself on Rob Has a Podcast a few seasons ago. And while Marie seemed to shake it off a little bit faster than Leo and Jamal did, we have finally arrived at a point where everyone has finally been able to tune out the cameras and just feel their feelings as they happen.

Does this mean I am flying the flag for Team Afghanimals? Not exactly. Not yet. While I’m not actively irritated by their very personalities anymore, their gameplay’s still a little lacking. While their facility with lying may bode well for their chances on some upcoming iteration of Survivor: Blood vs. Water, on The Amazing Race, it’s not particularly helpful to their game most of the time. While a well-timed fib does gain them an upper hand every now and then (see above, with Travis at the Roadblock), more frequently, it gets in their way. Or it does nothing at all to affect the outcome. This week, the Afghanimals’ last-place finish had nothing to do with lying and everything to do with making choices that clashed with a few very important things we’ve learned about the Amazing Race over the years.

First of all, if faced with a Detour option that involves searching a large area for a small object, don’t ever choose that one. Needle-in-a-haystack tasks rarely go quickly for racers. Sometimes they’re unavoidable, as with the infamous haystack Roadblock and the lentil Route Marker of TAR:Canada. But if you CAN avoid them, do.

Secondly, if a task requires you to make a temporary change to your appearance, it’s almost always worth a million dollars. When faced with a head-shaving Fast Forward back in season 20, Rachel Reilly was reluctant (to say the least) to lose $500 worth of hair extensions. Possibly they couldn’t have beaten Dave and the other Rachel under any circumstances, but weigh losing a $500 investment against a million dollar prize. Weigh a temporary sense that you don’t look like yourself against a million dollar prize. And it seemed as though the Afghanimals, for all that they want to project a sense of Machiavellian mastermindery, couldn’t swallow the idea of being temporarily clean-shaven (and temporarily heavily made up). Putting on makeup probably didn’t play to their strengths, but clearly, neither did looking for the tea. Their attention to detail was just fine on other tasks, so there’s no reason they couldn’t have knocked this one out and avoided a Speed Bump.

Thirdly, READ THE CLUE. The tea Detour still seemed like the far harder option, but it would have been over much more quickly if Leo and Jamal had noticed that the clue suggested they should be looking in the tea plants, not on the ground or on top of the plants. It wasn’t until midway through their second visit to the tea field that they figured out where precisely they should be looking.

Next weekend, teams are apparently headed to Japan to do the third Japanese game show parody in the show’s history (an accurate and nuanced cultural portrait that I’m sure thrills Japanese people to no end), and from there, it’s back to the States for the home stretch. I’ll be here to wrap it all up next Monday per usual!