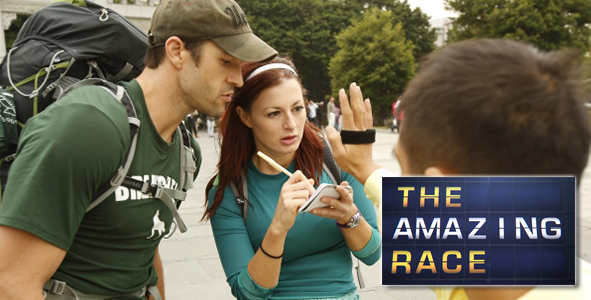 “If you ever drop your keys into a river of molten lava, let ’em go, because man, they’re gone.” —Jack Handey

I didn’t have high hopes for this week’s episode. What do we love about the Amazing Race? Among other things, the travel (of which there was none this week), tasks that push racers to their limits (we got one inspired by dads on Christmas Eve and one that the stoner kids played on your college quad), inter-team conflict (meh), and the odd trivia lesson (what do we learn about China this week? toys are made there!). But the show explored other avenues to find plenty of nigh-volcanic conflict and great fodder for analysis in what really should have been a lackluster leg. I’m sorry I lost my faith in you, TAR. It won’t happen again. (For a while.) 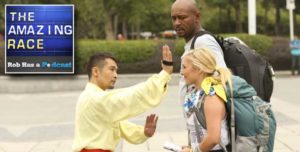 It’s clear that Mallory’s mistake this week is one of the biggest oversights we’ve ever seen on the show, which isn’t surprising considering how slapdash and random everything about their Race experience has been (through little fault of their own). Probably Bopper wouldn’t have set the bag down to begin with. Probably Gary would have known to check again for his bag before the cab took off. But we’re living in a world without Bopper and Gary at the moment, so Mallory’s carelessness went unchecked.

But once the damage was done, it was better to live with the damage than try to undo it, and here’s where Mark’s error comes in. If you don’t need an item or task to continue the race, common sense suggests that you should never backtrack. Not once you’ve gotten the next clue, not once you reach the Pit Stop…never. How would Mark have known that he could come back to a busy sidewalk in the middle of the fourth-largest city in China to find his bag exactly where Mallory had set it down half an hour previous? Let it go, because man, it’s gone—probably to the same mystical place where Bates’s backpack and Dandrew’s sneakers reside. The Race has a swift and strong current, and that current is only flowing one way. Mark pressed hard to take a one in a billion chance that the bag would still be there. That it paid off is irrelevant. That was definitely mistake number two.

Still, the dropped backpack wasn’t even the real reason we bid goodbye to Mark and Mallory this week. I think most of the teams still in it could have recovered from the lost pack incident, regardless of whether or not they went back for the pack. For Team Kentucky, the lost bag and ensuing argument was only a symptom of their real flaw—the inability to speak each other’s language.

goes wrong in the race, it goes wrong with everything your relationship is about.

Mallory leaving the bag in and of itself wasn’t a game-killer. Going back to get the bag wasn’t even the game-killer. It was everything that happened in between and after. What little trust Mark may have begun to have in Mal was destroyed, and I have to imagine his irritation at not having his bag expanded and overlapped with some or all of the following: his irritation that he was running the race with someone so different from him; his irritation that he was running it with someone not of his choosing; his irritation that Bopper wasn’t there; his irritation at not understanding or speaking Cantonese; and his irritation with having little sleep, strange food, lots of quease-inducing motion (which he hates more than Caroline hates assembling things), and pressure to represent Kentucky well. It all combusted into an irritation supernova for which the lost bag was merely the catalyst, and after that point, Mark was pretty much useless. It’s understandable, but to assign all the blame for the implosion of Team Kentucky to Mallory (who admittedly did not apologize as much as she should have, but she at least tried to mount a recovery) would be shortsighted.

My biggest fear here is that Mark and Mallory (and, of course, decent racers but fan unfavorites Eric and Danielle) have demonstrated to Race casting that Frankenteams have no place in All-Star seasons. This is patently untrue. I think it could work brilliantly with the right teams, and it’s something I’d actually love to see more of. Racers often form strong bonds with each other over the course of their seasons and even afterward—casting could absolutely dig into the tight-knit community of racer alumni and put together some teams who would work together brilliantly. Fans of the show who want to see their favorites are satisfied, diehards who think that All-Star seasons often feel like retreads are satisfied…everyone wins. Think about it, TAR. Do it again, but do it right next time.

Elsewhere on the race course, the extra Express Pass was the platonic ideal of extra Express Passes: a brief source of dramatic action, a fostering of communal spirit, a momentary saving grace, and then gone. That was exactly the amount of time I like to see devoted to Express Passes. Much was made of Jennifer’s strategy of flirting her way into getting the pass, but honestly, she could have been all business and the move would still have made sense to everybody. The cowboys got rid of the extra pass, it stayed in play for about .05 seconds, the country singers were able to save themselves, and then it was all over. Smell ya later, Express Pass. I will give the cowboys credit here—their eyes-on-the-prize, no-alliance, no-nonsense racing strategy has been working like a charm so far. Now, if they could just get a little bit better at following directions.

Not every team is ready to eschew alliances, of course. Meghan and Joey rekindled their alliance with John and Jessica this week, even to the slight detriment of their own game. I don’t believe it was done with total disregard for what else was happening at the time, though. I think some cost-benefit analysis was done. YouTube weighed their friendship against the fact that they were only a few minutes behind the pack at that point with a Detour left to deal with. Indeed, feathercocking evened everyone out to the extent that a team who backtracked for their backpack wasn’t yet totally hosed, and now John and Jessica may feel slightly indebted to their old pals in the future. Was it the smartest thing Joey and Meghan have ever done? Not really. But it wasn’t head-slappingly moronic either.

I’ll close out my column by pointing out an unlikely MVP for the episode: Rachel Reilly, usually a reliable source of hysteria and conflict, has been running a race as low-key and quietly competent as the one Brendon ran with her last time. She’s taken the lead on navigating, she’s stepping up when she knows she can handle a task (and taking a backseat when she knows she ought to), and all the interactions she’s had with other teams so far have been entirely pleasant and civil. The Amazing Race is supposed to be fun and good, and this time it totally has been for Rachel. Have we seen the last of drama queen Rachel? The previews suggest we’re going to have an encore next week, but it’s anybody’s guess whether it’s the full-fledged return of Classic Rachel or just a brief interlude.