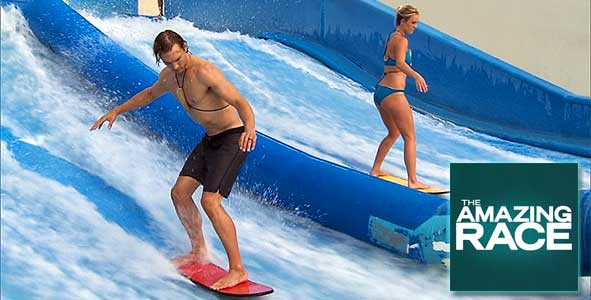 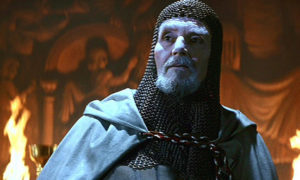 The path to Amazing Race victory is always full of decision points, and from the comfort of our couches, we all think we’d have made different (and better) decisions. But when you examine all of the options, and consider the information on hand in the moment, it’s harder to say what’s going to be a good choice and what’s going to be dumb. This week, I’m going to contextualize a few of the choices that were made this week — some that were smart, some that were less than smart, and some that are so totally ridiculous, I can’t figure out the rationale.

When Kym and Alli saw that there was a U-Turn approaching and a Fast Forward available that would enable them to skip over the U-Turn, it didn’t much matter what the Fast Forward was. With the other four teams all but guaranteed to U-Turn them, and no idea what the two Detour options would be, it seems like it’d be a bigger risk to NOT go after the Fast Forward. At this point in the Race there were only two other teams out on the course, but all it takes is one tiny slip-up on a task, or one wrong turn, and just one of those teams could beat the cyclists to the U-Turn board.

And when was the last time you saw a Fast Forward that involved any sort of real risk? For years — maybe even since they stopped having them every leg — the Fast Forward has been far too easy. Off the top of my head, there have been a couple of eating tasks (the sheep head in season 17 and the sheep …whatever that was in season 13), some gross tasks (Abba and James collecting dead rats in season 21), and one or two that involved some measure of actual skill (Art and JJ’s helicopter task in season 20). Most of the rest of the time, whoever gets the Fast Forward clue first gets the Fast Forward. In fact, one of the OTHER Fast Forwards of Season 20 — the hay-stacking — was maybe the last time more than one team had a fighting chance at it.

Odds were pretty good that no matter what that Fast Forward involved, Kym and Alli would be able to knock it out well before any of the bottom two teams even contemplated going for it. It’s just dumb luck that this was the one and only time that a) a Fast Forward involved actual skill, and b) that actual skill was something one of the other teams did for a living.

If you saw a Survivor alliance vote out a big threat, and that big threat turned out to have an immunity idol that nobody even knew existed, did that alliance make the wrong decision? Sure. But was it a BAD decision? No. In the moment, and given the information, it was probably the best possible call. And so it is with Kym and Alli. Their decision turned out to be the wrong one, but it was the best possible one they could have made given the circumstances.

So was Adam and Bethany’s choice, though. They had to know they were going to be the second most likely team to be U-Turned whether or not they went for the Fast Forward, given that they were in the back of the pack and didn’t have a Save. Without the Fast Forward, I don’t see a scenario in which the surfers WOULDN’T have been eliminated this week.

Jim and Misti’s Choice to Do Crabs Instead of Massage: Between a Roadblock that could only be performed by one racer at a time and a Detour option with a fixed timeframe, this week’s leg was designed in a way that made it really difficult for a team to overtake another team. The powers that be added the merlion hunt to the end to mitigate this somewhat, but for the first two-thirds of the leg, a fast taxi was just about the only true variable.

Jim and Misti were in a truly unique position in that they already knew there was no way they were going to be eliminated. But knowing Jim, just surviving the leg wasn’t going to be enough — the dentists were going to try to improve their lot any way they could. If they couldn’t have first place, at least they could try to make up a bunch of time and have an advantage in the next leg (as well as minimize the already-small chance they’d be U-Turned), and for all they knew, the Detour was going to be their only chance to do that.

So when the Detour options presented themselves, and one was clearly going to involve no skill whatsoever, it was best to try to burn through the crab-cracking faster than they could have gotten massaged and cupped. And as it turned out, between that and some quick merlion-hunting, they DID manage to maneuver their way to a better position.

Amy and Maya Trusting the Wrestlers: The timing of this decision is really what makes it a bad call. Had Amy and Maya never seen Brooke and Robbie being less-than-honest, it might have made sense that they’d trust a team they’d already aligned with. But they had just seen Brooke and Robbie fail to do something they said they were going to do, barely ten minutes earlier. Brooke and Robbie were supposed to U-Turn the cyclists. They didn’t, and they were quite up front about the fact that they hadn’t honored the bargain once they were confronted about it. Is that really a team you should be asking for help, let alone believing? Bad call, Amy and Maya.

Brooke and Robbie Failing to Come through on the U-Turn (and then lying about the merlions): U-Turning both the cyclists and the surfers was the way to ensure that whoever didn’t get the Fast Forward was going to not only going to be knocked even further behind, they’d also have no chance to use a U-Turn themselves. There’s no chance there’s going to be another U-Turn, so I don’t know what they were saving it for.

That it had no bearing on what ended up happening in the leg was a total accident. There are still consequences to their actions — namely, now they’re known as a team who can’t be trusted.

And maybe that one instance could still have been forgiven if they hadn’t followed it up with yet another totally blatant lie during the merlion hunt. Over the summer on TAR:Canada, twin brothers Pierre and Michel gave similarly transparently deceitful directions. The only direct consequence of their random lie was that everyone else wound up distrusting them and gunning for them. Brooke and Robbie are in the same boat now. And now that Kym and Alli are gone, there’s no other common enemy to deflect any ire. Amy and Maya are definitely not going to help the wrestlers after this leg, and once word of their conduct gets around, I seriously doubt they’ll have any friends left for the home stretch.

The fact that we won’t see another U-Turn, and that it was going to be every team for themselves soon anyway, is kind of irrelevant. It’s never a good idea to piss people off for no reason, and there was very little to be gained from out-and-out lying in this instance. Amy and Maya would have had to screw up pretty hard to be eliminated this week — much harder than simply having to backtrack a little bit. There was basically a 100% chance they’d live to hold their grudge for at least one more leg (and probably two, since it’s all but guaranteed to be a non-elimination leg next week).