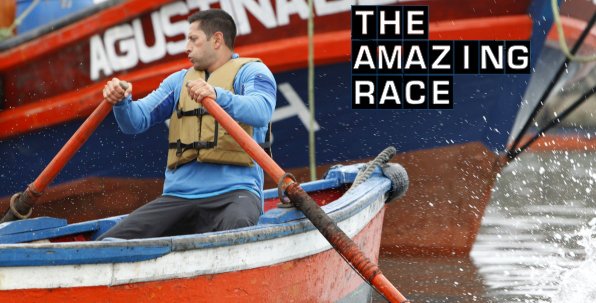 Who will be the one who knocks on TAR Season 23?[/caption]

Television history was made last night. After months and months of breathless anticipation, the day finally arrived when viewers could finally consume what was easily the most satisfying, ground-breaking, and cathartic hour of TV in years. Nonstop action, deep characters, and a healthy dollop of pathos marked a heart-pounding episode of one of the best series of all time.

Oh, and right before that, some of us watched The Amazing Race.

Yeah, tense and twitchy over the Breaking Bad finale (not to mention grouchy about being forced to watch it on a delay, THANKS NFL) was not the ideal state for watching TAR. But fortunately, it, like Breaking Bad, met and even exceeded my expectations. I go into every season of this show a little bit cynical. And then, usually, it manages to pull me in over the course of a few episodes. But I actually came out of this first episode with my cynicism already starting to fade. Despite some hiccups, I’d say we are off to a stronger-than-usual start with a halfway decent cast.

I definitely didn’t have high hopes in the opening minutes. Season 23 kicked off at the cheesiest and most manufactured starting line ever, followed by a blatant commercial. I’d deem that surprising in a bad way. The race has never started with Phil telling the racers outright where they’re going to be headed once they get into their product-placed Ford. They’ve always had to at least open a clue to find out. So that seemed off. And as with every premiere of this show, the editors tried to pack in too much action as they attempted to showcase all 11 teams. But once the Race got going and the teams arrived in Iquique, we got a relatively coherent and absorbing ride to the mat, with more than a few unexpected moments.

Plenty of things about the premiere were not the least bit surprising, starting with the teams. Ally and Ashley were cute and girly (“we like to stand out, like sparkly things!”), Chester and Ephraim cracked wise, Tim and Danny made an aw-shucks observation about how different this was from their hometown before fading into the background, Amy wore her pageant smile for the entire hour, and Brandon and Adam were weird for weirdness’s sake. I expected that we’d see one adrenaline task and one local-color task, which we got. I expected that Chile would be beautiful (I went to Chile last year—though admittedly not to Iquique—so I already sort of knew it was gorgeous). I expected that there would be some blatant Ford product placement, which (ugh) we got.

But there were still plenty of good surprises. I couldn’t have predicted that Rowan and Shane would be so game for everything that got thrown at them, or that Nicky and Kim would prove to be much more than the sum of who they’re married to, or that Hoskote and Naina would be such non-starters. I didn’t expect that racers would be greeted by a pile of lazy but belligerent sea lions as they returned to the dock with an armful of fresh fish. And I definitely didn’t predict that three (!) teams would completely fail at reading comprehension.

Let’s start with Travis and Nicole’s clue-reading hiccup, which, though arguably the least egregious of the three, was the only one with definite consequences. They had no trouble figuring out exactly who was supposed to do the second Roadblock, but missed the very simple “on foot” direction once they finished. As a result, the likable and strong-seeming doctors (is this a trend in 2013 Amazing Races or what?) lost a healthy lead and a pair of Express Passes to Tim and Marie.

Incidentally, we haven’t seen a classic Roadblock switcheroo in a couple of seasons, although they were a staple of the early Race, starting in the first season when a camel-related Roadblock task in Tunisia ended up being much harder for the non-participating partner. The last time we saw one of these, in Season 20, it was almost exactly the same task as it was this time—the non-participating roadblocker had to jump off of something high and the Roadblocker had to find them. I think it was put there solely to make Rachel Reilly skydive.

Leo and Jamal, our designated comic relief for the season, made the second reading blunder when Jamal, who’d technically done the first Roadblock, started to do the second as well. But it didn’t end up having a huge impact on their game. With a two and a half hour lead over the last four teams, they’d have had to screw up pretty hard to even see them, much less be in any sort of danger of being eliminated. And this early in the Race, that’s not likely to happen. I think both the Afghanimals and the doctors have learned their lesson now. What remains to be seen is whether the other teams can learn from the mistakes of others, or if the upcoming episodes will reveal new and exciting ways to not read the clue.

What else? Well, Tim and Marie sniped at each other (because that’s why they were cast), Chester and Ephraim quite charmingly took the entire leg in stride, Jason showed off his rowing skills, Rowan showed off his punning skills, and Kim overcame a very temporary and very minor moment of panic at the paragliding task to set a great example for her son.

I think the first leg of the Race is always an imperfect sample by which to judge the cast. Most of them are not yet used to being filmed, so their behavior in front of the camera is not always natural. Many teams are still trying to be entertaining rather than letting it come naturally. It’ll take at least a few more days before they start to forget the cameras are there and their true selves come out. It’s possible that Tim and Marie will still drop well-timed digs at each other, or that Leo and Jamal will continue to goofily hit on Ally and Ashley, or that Rowan and Shane will keep on screaming “Bingo!” when they check in at the mat. Or it’s possible they’ll all settle down and start acting like normal people. And we’ll eventually get a sense, albeit an imperfect one, of what all of these people are really like.

But there is, unfortunately, one team every season who won’t get the chance to show us, and this season that team was Hoskote and Naina. It’d be easy to say that the third and most egregious instance of reading comprehension fail was the final nail in their coffin, but in reality, I think Hoskote and Naina were sunk well before they failed to read the clue. They arrived at the Roadblock as Brandon and Adam, the second-to-last team, were finishing up, and even if they’d done it perfectly on the first try, they would still have needed a miracle of epic proportions to rescue them.

The precise moment at which their game ended might be debatable, but certainly Hoskote has his own opinions there. His closing line of “Father knows best” suggests that while their dynamic started off a little more subdued than, say, Ron and Christina in seasons 12/18, he was going to be just as much of a control freak, and probably even more unwilling to see his daughter as an equal member of the team. Ron got better about that over time. Hoskote, regrettably, will not have this opportunity. I’m not sure either one of them is coming away with a fresh understanding of the other’s perspective. There just wasn’t enough time.

Next week, the teams appear to be visiting some sort of salt mine. This gives Tim a prime opportunity to utter the phrase, “Jesus Christ, Marie, they’re minerals!” just before it stops being topical. If this happens, they might actually become my favorites.

Liked it? Take a second to support Jessica Liese on Patreon!