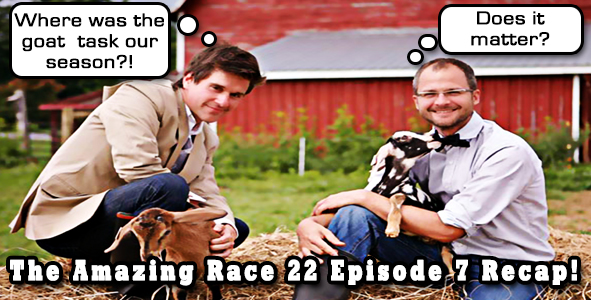 Hi race fans!  Eric Curto here with your Amazing Race 22 week seven recap!  I have so much in store for you this week as the racers continue their trek through Africa. I mean so much people… the police are even involved!  Ok, not because of me but let’s just say being blonde and pretty doesn’t help in Africa.  The hockey boys are still being helped along by outside forces and Art, JJ, the Beekman Boys and even Abba make this episode!  Still want more?  Well how about a love scene between Chuck and Wynona that will leave you speechless and not one but two scenes that didn’t make the show.  Of course I’ll tell you who is in, who is out (if anyone) and all the drama as well.  You may have watched The Amazing Race already, but you haven’t seen my comedic take on things.  So sit back, relax and get ready for your recap!

Want to get involved with the recap? Then chat with me during the show over on twitter @RealityRecaps or in the comments section below and your questions, comments or suggestions could make the next recap video!