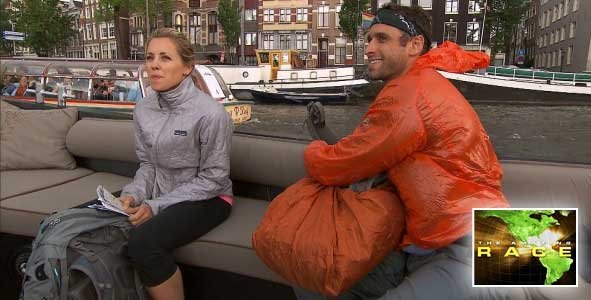 I’m always unaccountably excited when the Race heads to a city I’ve actually visited, and it makes me even more of an insufferable expert than I already pretend to be. The weekend I spent in Amsterdam in 2008 probably doesn’t actually qualify me to be an Amazing Race expert any further than anything else I’ve done in my life, but when I say that Amsterdam is probably one of the easiest cities the Amazing Race could visit at this juncture, at least you know I’m coming from some small place of authority. At least 90% of the people I met in Amsterdam spoke fluent English. Cabs are plentiful, public transportation is easy, everything is clean, the city center is reasonably easy to navigate. The biggest stressor is probably avoiding aggressive cyclists and/or stoned tourists. After Jakarta and Dhaka and even Moscow or Shanghai, Amsterdam feels like a cakewalk — or should I say a poffertje walk?

And it was to the detriment of the season arc, I believe, that this was such an easy city. Can you imagine this level of inter-team conflict happening in a much more culture-shocky country, as teams powered their way through a set of nigh-impossible tasks? There might have been actual fisticuffs. But as it stands, this was a relatively sedate leg of a relatively sedate season. Which isn’t to say Amsterdam is not a completely awesomeballs city. It is. And there’s a lot that can be done with it. It’s just not the most exciting option this far into the race.

Although I tolerated (if not aggressively defended) Ryan and Abbie’s bottom-of-the-pack alliance with the Beekmans for two and a half legs, nobody is happier than me to see it finally torn asunder. Look, I’m not sure how many more times and how many more ways it can be said: this is not the Amazing Make New Friends and Tour the World With Them. It is the Amazing RACE, goddamn it. There will be plenty of time to hang out and be besties when you are done winning a million dollars. Go on vacation together or something. The Amazing Race is a competition. Ryan and Abbie, who stood to win twice as much money as everybody else if they came in first, should have been fighting harder than anybody.

But their distorted perspective extended far beyond their unwillingness to compete with their brothers in arms. By the time they met their demise, they seemed to think that ANY attempt to compete with them was a direct and personal attack. From the balanced and not-at-all jet-lagged perspective of my couch, using a competitive advantage that the game itself puts in your path doesn’t seem very evil in and of itself. Generally speaking, it’s not a personal attack, either. I can certainly think of a couple of other seasons where that absolutely was the case, but I don’t see that in this one.

I can imagine that by the time Abbie and Ryan reached the U-Turn mat, it probably DID feel like everyone up to and including the universe was conspiring against them, and it probably DID feel very personal. But this was a no-brainer for the Chippendales — they knew Ryan and Abbie were behind them and they knew that the race tends to bunch the teams back together at key points. Given a chance to make a comeback, Ryan and Abbie would be a force to be reckoned with. U-Turning them was the right call and had nothing to do with whether or not James and Jaymes thought they were good people or even good friends. Nobody had it out for them, except maybe the Race itself. She can be a fickle bitch sometimes.

The three front-running teams used the second half of the double U-Turn in an inventive way: by U-Turning a team who definitely wouldn’t have to do it, they knocked it out of play and effectively turned it into an old-school U-Turn. Remember those? The ones that I pointed out were basically free passes to eliminate someone? While The Amazing Race isn’t quite made for Survivor levels of scheming, strategy still plays an important role.

The Switchback was probably the most disappointing misstep on the part of the producers this week. As fun as the ditch-vaulting task probably is (and I will grant that when we first witnessed it back in season 12, it was pretty awesome, especially when Grandpa Don rocked it), it just feels careless to me, like Race brass can’t be bothered to think up new activities for their racers. And after the first ten minutes of the show involved racers taking leisurely tours through the city before enjoying a snack (okay, some snacks were better than others), it felt extra lazy. It’s a slippery slope to every Detour option involving running through an obstacle course to retrieve puzzle pieces. Nobody wants that.

I thought Abbie and Ryan were a great team who treated each other well and powerhoused their way through most tasks, but I’m pretty sure I couldn’t have taken another week of their warm fuzzy non-competition with the Beekmans. With one half of the super best friends finally out of the race (or “race” as certain people are treating it), hopefully things will get a little more heated as teams start to head down the home stretch. If the Beekmans decide they have to win as a tribute to their former allies, maybe it’ll light a fire under them.