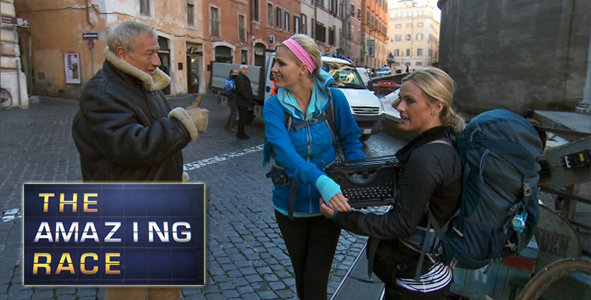 I’ve said it before many times – the Amazing Race is not a social game at its heart. Not the way its CBS brethren are. A great team doesn’t necessarily have to engage others in order to win the whole thing, and there are plenty of teams who make the mistake of going into the show with the stated goal of forming alliances and eventually end up falling out of contention.

You are never going to convince me that alliances have ever been a primary deciding factor in getting a team to the end. But they do make a difference in small, subtle ways. Even though a team consisting of Pris from Blade Runner and Caprica Six would no doubt win the million if they were cast, we are dealing with human beings here on the real show, and no team of actual humans is an island. Interpersonal conflicts and confluences alike color every leg on every season. This week, especially, the fates of many teams were intertwined in a lot of interesting ways.

First off, there’s straight-up teaming up to do a task, which has been Caroline and Jen’s forte in legs past. Dave and Connor seem like a natural match for them, given that they have raced together in the past and everyone involved seems to radiate that same affable wholesomeness. Since the O’Learys didn’t make it far enough into their last race to find an opportunity to make real allies, they’re lucky to have some natural ones left in the game this time around. Country singer fans just have to hope that Dave and Connor don’t end up slingshotting past their alliance partners just like Bates and Anthony did in season 22.

(Incidentally, I thought Jen and Caroline did very well with everything that came their way this week, and I definitely wouldn’t mind it if they won, although I do think we could have gone a week without finding out yet one more thing that Caroline doesn’t think she’s good at. We’re still waiting to see a task where she jumps up and says, “this one was MADE for me! I will rock it!” The longer we go without seeing this, the quicker my ardor for them is going to cool.)

Fortuitously, this week’s Roadblock featured exactly the sort of task on which teaming up makes a lot of sense, provided you’re not fighting it out for last place. On most tasks, each team must do all of the work themselves and return the fruits of that labor, whether it’s a pile of logs, a gassed-up taxi, or a solved puzzle. You can collaborate to varying degrees on these things. But on a landmark-focused counting task like this one, everyone has to arrive at the exact same answer, which can be arrived at by one person or several with no net difference in labor.

Surely Jet and Flight Time must have been having some flashbacks to Lichtenstein, where teaming up on this sort of task had very different outcomes for each of them. And the Afghanimals, of course, have fond recollections of working with their race-wives to measure distances in Portugal last season. If you’re not in any danger, there’s no reason in the world not to arrive at the same answer as the other people doing the task, knock it out fast, and save your energy for a more competitive moment.

The key phrase here, of course, is if you’re not in any danger. Which brings me to another interesting way the social game came into play this week. The Afghanimals inadvertently steered this leg’s outcome when they sort of dipped their hand into an aspect of the Race that did not concern them and diverted the natural progression of events, all for a promise that the teams involved wouldn’t U-turn them if it came up. So I guess Leo and Jamal haven’t TOTALLY evolved from last season – they’re still prone to unnecessary strategizing for strategizing’s sake.

Essentially, the Afghanimals narrowed an already narrow gap between themselves and two teams they knew to be behind them for the possibility that if a U-Turn materialized, and if John and Jessica or the Globetrotters found themselves ahead of the Afghanimals, they wouldn’t use it on them. That’s a lot of ifs in exchange for what amounts to basically doing the Roadblock for the other teams. They aren’t actually getting a whole lot out of this bargain, mainly because there isn’t much the other teams have to offer. Nobody’s rocking an Express Pass, or a hidden immunity idol, or a Power of Veto, or anything like that. What if Leo and Jamal had gotten lost on the way to the final mat? Weirder things have happened. That twenty minutes they saved the two teams behind them could have cost them the race.

Furthermore, if you’re in the position to U-Turn someone in this field of competition, would Leo and Jamal really be your first impulse? Sure, they’re great racers, but they’re not the only great racers, and they’re not the biggest threats on the field. It would only make sense for a team to U-Turn them if that was the only way to save themselves (ironically, how the Afghanimals themselves used their U-Turn last season).

A few moments before the Afghanimals made a move that even Amy Diaz might have called way too helpful, the Brenchels illustrated a third way in which helping another team can shake up the game. When Dave and Connor struggled to find the clue box, Rachel simply gestured in the general direction of the box instead of leading him by the hand to it or even giving him detailed instructions. Which was absolutely the right call in the moment from a purely race-focused standpoint – she’s got a race to run, dammit!

Connor seemed to disagree, voicing displeasure that she didn’t help him further. This did Connor no favors whatsoever. Just because YOUR team is the kind of team who’ll step aside and let another team jump onto the mat ahead of you doesn’t obligate everyone else to be the same way. When it comes to getting help from your opponents, you have to expect the least and hope for the most. Rachel didn’t have to tell him anything. I’m not sure I would have.

There have been hints on social media that the wholesome, upbeat blonde alliance was not exactly signing up for charter membership in the Brenchel fan club once season 24 wrapped. We may have just witnessed the birth of that animosity. With the U-Turn looming on the horizon, things might finally start to get a little bit heated. I hope this one tiny moment isn’t the only thing causing it. That would be very disappointing.

Our Race casualties this week, John and Jessica, ultimately wound up being about as interesting and remarkable as I’d predicted they would be way back in season 22. While the Express Pass blunder is probably still their primary legacy, I don’t think they have anything to be ashamed of in season 24. A bad cab and a little bit of misguided help from Jamal were their undoing this week, not necessarily anything they specifically did. They can walk out of this particular gladiatorial arena with their heads held high.