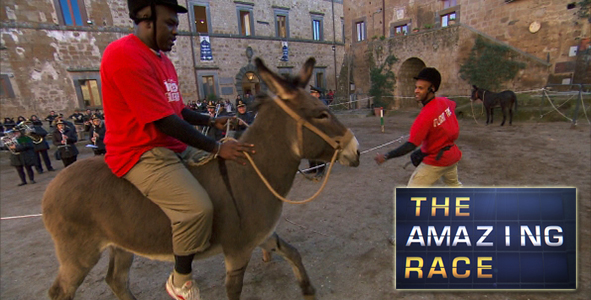 After last night, I have to give The Amazing Race credit for one thing: they may have brought back a bunch of teams from previous seasons instead of expending the time and money to find new ones, but they sure have managed to make it seem like these are entirely new and different people, almost across the board. Dave O’Leary, the sweetest man ever to run the race, is now a pouty, self-righteous villain. Self-centered, drama-prone Rachel is a plucky heroine. The sneaky, strategy-minded, camera-conscious Afghanimals are upbeat and endearing. Who are these people and what did they do with the original All-Stars cast?

Two seasons ago when Max scoffed at Jen and Caroline’s stilt-walking abilities because they were female and blonde, it pushed me onto Team Country. The same thing has just happened again, but this time with the unlikeliest of parties. Dave, of all people, made a snarky, semi-sexist ad hominem attack on Rachel, and guess what? It officially makes me want Rachel to win the whole damn thing just so she can rub it in their faces.

Does that mean I’m totally defending Brenchel’s decision to U-Turn Dave and Connor? Definitely not. It was a ridiculous, emotional move that had little net effect on the game, and Rachel was right to question it all the way to the Roadblock. Given how inept Connor turned out to be at creating an illuminated manuscript page, it’s unlikely that they’d have been a threat to the Brenchels’ first-place finish even if they hadn’t had an extra task on their hands. Neither were Dave and Connor in any actual danger of being eliminated thanks to the U-Turn, and I’m always of the mind that you should never U-Turn someone you expect to see again on the next leg. But Dave and Connor’s reaction to the U-Turn was even more ridiculous, especially, again, considering the fact that it had very little net effect on the game.

Last season, we saw a similar inexplicable emotional reaction to what amounted to a tiny strategic blip when Travis and Nicole proclaimed that the Afghanimals were horrible people for lying about the fact that they’d U-Turned the beards. I certainly felt a little deja vu when Dave began proclaiming that the Brenchels were horrible for first refusing to give them directions in the previous leg, then for deploying the U-Turn at all. Is it really much better or more noble to use the U-Turn yourselves, run down to find the team you U-Turned, inform them you did it, and offer to help them?  A U-Turn is still a U-Turn.  If you don’t believe it should be a personal attack when you bestow one, you shouldn’t take it as one when you receive one.

And speaking of ridiculous moves, the Afghanimals seem to have been replaced by their bizarro counterparts as well, although I guess there’s no perfect way to respond to a team running up to you, telling you they just screwed you, and offering to help minimize the damage. Leo and Jamal were certainly gracious and classy about it, and they definitely tried to make lemonade from the lemons. Letting Dave and Connor figure out the trick to Donkey Build while they themselves finished Donkey Race was a pretty genius way of forcing them to make good on their offer to help, too.  If there is actually a way to make a U-Turn into a Bless-turn, I suppose they managed well enough. In fact, I’d have said they handled everything perfectly if they hadn’t waited around for Connor to finish the Roadblock. Everyone, once again, started to forget it’s a race, and certainly Leo and Jamal did not owe Dave and Connor a thing. Once the four of them completed the Detours, they were even, if you ask me. No need to stick around to keep helping.

(Oh my god. I just had a horrible thought, based on the fact that the Afghanimals completed both sides of the Detour before they ever saw the U-Turn board. If I were on the most unrepentantly evil Amazing Race team ever, I would totally do what Dave and Connor just did, except I wouldn’t actually go through with sticking their picture on the U-Turn board, I’d just make the other team do both tasks for no reason. Maybe I’d even officially U-Turn somebody else.)

Hey, remember how the show decided to bring back three of the most beloved (or “beloved”) teams in Race history for a third time this season? And remember how two of those teams were still in the Race as of last week? Yeah, I wouldn’t blame you if you didn’t. Another major shocker of the season is the fact that both the Cowboys and the Globetrotters, who were evidently brought back because the Powers That Be were worried they didn’t have enough big characters, have been largely relegated to the background.

Which isn’t to say THEY’VE done the same character 180 as their competitors. Jet and Cord remain the steadily competent racers they’ve always been, avoiding the drama and pulling out high finishes almost every leg.  Knowing they’re generally a prime target for U-Turns, they used their Express Pass perfectly and even found some time to clown around with the monks at the Roadblock. I was never much of a Cowboys fan before, but they’re the only threepeaters who’ve actually seemed to want to be there, and that definitely generates a lot of goodwill where I’m concerned.

And Flight Time and Big Easy…well, what can I say about them? They were never contenders. They’re as full of great one-liners and visual gags as ever, but they weren’t particularly concerned with the racing aspect of things, preferring instead to coast along at the back of the pack. I guess when Bertram calls you wanting to know if you’d like another free trip around the world, you wouldn’t tell him no without a really good reason, but as funny as the Globetrotters are, I’d rather have seen a team out there who seriously wanted a second (or third, if we must) chance at the million.

Apart from the three-timers, you have to admit that there’s hardly been a team on this race whose season 24 portrayal has at all matched their previous appearance. The twinnies went from hyperactive powerhouses to shrieky, inept irritants who were put out of their misery almost immediately. Mark put a lot of heart into his first race but phoned it in on his return, and super-sunny Mallory hardly came off as any more stoked to be there than he was (though I suppose you can’t blame either one of them, given the circumstances). Joey and Meghan also lost the enthusiasm they’d shown in season 22, and that same season John and Jessica were portrayed as ineffectual villains, but came back as mellow surfer dudes with an ironclad romantic bond. Jen and Caroline were chirpy and flirty on their first season, but have dialed back the flirting considerably, and Jen, at least, is in it to win it.

While this season has definitely been the most erratic when it comes to character arcs,  past returnees have definitely managed to escape their original casting pigeonholes before, for better or for worse. So I’ll conclude with yet another list in which I draw on my alleged Amazing Race expert status:

Five Character 180s from the Annals of TAR All-Star History

(not necessarily the best, or most authoritative, but some good ones.)

Teri and Ian: In Season 3, the token oldsters were surprisingly competitive racers, but their defining characteristics were their laser-focus intensity and Ian’s emotional range, which went from “mildly cranky” on a good day to “tight ball of smoldering rage” on a bad one. They were huge characters and no-brainers to be asked back, but the Teri and Ian we saw in season 11 was the affable, supportive, almost corny pair you might have expected out of a team whose label was “married parents.”

Mel and Mike: In season 14, father/son team Mel and Mike were the clear fan favorites, and if it hadn’t been for a bad cab, they’d have been credible threats to take home the million. But they were total nonstarters when they returned for Unfinished Business. Hampered by Mel’s injury on their second go-round, they were barely out of the gate when a cold, wet task in Japan didn’t just end their game, it actually threatened their health. If you hadn’t seen them before, you might kind of wonder how those guys managed to get on the show in the first place.

Joe and Bill: Like Teri and Ian, Team Guido were the villains of their first go-round. If you heard them on our podcast at the beginning of this season, you know that real-life Joe and Bill are much closer to their season 11 portrayal – sweet, charming, and very, very funny. I don’t mind telling you that I was rooting for them so hard in Amazing Race: All-Stars that I was yelling at the television in the final crushing moments of their final episode. Hard to reconcile that with the team whose game-ending blunder in Season 1 was heralded for years as the ultimate Amazing Race karmic retribution.

Kevin and Drew: This season, my perpetual puzzlement that I’m a big Afghanimals fan and criticizing Dave and Connor is giving me major deja vu when I think back to the early episodes of the first All-Stars. As season 1’s comic relief and foils to Team Guido, Kevin and Drew were the very first team everyone was expecting to see return, but on their second time out, they limped their way to a disappointing 10th place, sniping at each other and complaining about their aches and pains the entire time.

Kynt/Kent and Vyxsin: As fun as they were, there were certainly shades of the trouble to come for the goths in season 12, but when they returned in Season 18, their game fell apart almost immediately. Unlike Mel and Mike and Kevin and Drew, though, K(e/y)nt and Vyxsin actually took their parade of dysfunction shockingly far in the race, which definitely did Kent, at least, no favors. While Vyxsin threw her fair share of tantrums, though, she might have actually wound up improving her legacy by pulling it together and dragging her constantly whining partner all the way to a fifth-place finish – exactly the same spot they managed on their first race.