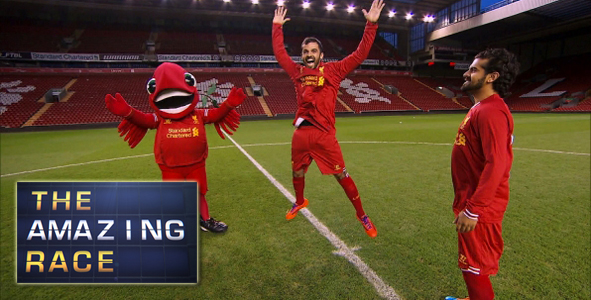 As we usually do near the end of any major network reality season, let’s put on our Jonathan Penner hats and take a look at the stories that are being told about each of the remaining teams.

Frequently, Amazing Race fans talk about which teams they like and don’t like. But those are loaded and subjective words, and we don’t always know what exactly people mean by “like” and “dislike”.  Sometimes we may not even know what we ourselves mean. I think any fan of the show who approaches it the least bit critically knows that the editors are trying to tell a story, with a hero and a villain. It is an interesting exercise to try and pinpoint the ways in which our favor can be swayed, one way or another, over the course of this season’s major narrative arc.

So what can a team do (or, more accurately, what can the editors show) to make the public like them?

Excel at tasks. Plain and simple, it’s a race. Race well, and you’re a good racer. Knock tasks out of the park and people will respond to that. So much the better if a team surprises us with a hidden talent. Caroline’s sharpshooting skills, Dave’s bartending skills, Jet and Cord’s remote-control charioteering skills — be a good racer, and someone, somewhere, will want you to win. Everyone left in the race has had a shining moment.

There’s only so far editing can take this one – if you finish first, you finish first, and if you do it a lot of times, it’s not a fluke. But certainly the difficulty of a task can be played up or played down according to how it supports a hero or villain. So when you’re choosing a team to root for, think hard about their actual achievements versus how much of those achievements you saw. I think the editing has been fairly balanced in this regard, but nothing is ever 100% balanced.

Shake off adversity – and help others shake it off too. Attitude counts for a lot in the eyes of the viewers. If you can keep yourself composed through a run of bad luck and come out the other side, you can be the most obnoxious Racer ever and you’ll still get props for it. And so much the better if your optimism is contagious. The best way to help another team is not to straight-up do the task for them, but be kind and supportive to them as they work it out themselves. Brendon and Rachel signing “applause” to Luke in an attempt to help him calm down in Malaysia was probably their best moment all season.

That goes for your teammate as well, of course. John and Jessica came across as far more likable this season in part because of how considerate and supportive they were of each other, and I’ve long admired Jen and Caroline’s ability to bounce back when they hit a snag. One of them might have a mini-meltdown, but the other will pull her out of it pretty quickly. And we know Brenchel have made inroads on this, but handling stress will never be Rachel’s favorite thing. Dave and Connor, on the other hand, haven’t been seriously tested that we’ve seen, but their mild brushes with stress have not portrayed them in a particularly flattering light. It’s hard to tell how that will translate to the final leg.

Say charming and memorable things. We’re all suckers for a good one-liner. Everyone cast for the show is pretty funny in their own right, so you never know who’s going to have the perfect joke for any event on the Race. This season there was an embarrassment of riches in this department – the Cowboys, the Afghanimals, and the Globetrotters were all great at this (that’s why they were asked back!), but almost every team got in a pretty good comedy moment. Brendon’s wedgie jokes, the country girls’ goofy playfulness…even Dave has his moments of dry wit (this week’s winning comment: “We’re gonna win The Amazing Race. Or die from it.”).

Blaze a trail. One of the big reasons Brendon and Rachel are being portrayed as the underdogs is the fact that the other teams were colluding against them. Brenchel’s doing their own thing. And it’s one of the reasons the Cowboys are all-time favorites. This has always been a show that values performance over strategy, so if you’re keeping your eyes on your own work, you usually look pretty good compared with any team who hits the pause button on their own race to straight-up do a Roadblock or Detour for their alliance partners.

Be excited and grateful. Look, you’re getting paid to travel around the world and do things that most people only dream about. This show gets far and away the most applications of any CBS reality show. A lot of the reason we’re sorry to see the Afghanimals go this season is because no matter what was going on, they always seemed to be having fun. Jen and Caroline also excel in this regard — they’re happy to be there. The million dollars is just icing. They’ve never been shown discussing what the money means to them, unlike, say, Rachel, who’s already mentally setting up that 529 account for Baby Reilly-Villegas.

But let’s also make sure we give equal time to the flip side, because that’s equally interesting (if not more so). What can a team do (or what can the editors show a team doing) to make us dislike them?

Whine or sulk. You can totally screw up a task and remain a likable team if you maintain the right attitude about it. Shrug it off, say, “we sucked at that,” and give it another shot. But if you continually kick the dirt and proclaim the task to be unfair or impossible, that’s not going to endear you to any of the viewers. There’s a crucial distinction between “this task is very hard” and “I can’t do this,” and while I know most of the time it’s hyperbolic when either of these things is expressed, there’s no place on The Amazing Race for defeatism. I have a hard time rooting for Connor when he’s moping about having to do yet another task his dad should have done. It’s almost as hard as rooting for Rachel when she is crying.

Make it all about you. Why did I have so much trouble with the Afghanimals the first time out? They couldn’t just relax and have faith that the camera was getting all the footage it needed. They were hell-bent on being the comic relief of the season. Thankfully, they seemed to get over it, for the most part, by the time they came back for a second season. They didn’t need to be the stars of the show anymore. They had enough trust in themselves, and the cameras, to believe there’d be plenty of entertaining moments featuring them.

As three-time reality veterans, Brenchel also had a hard time relinquishing the spotlight. And on occasion, that still flares up. Last night, when Rachel realized she’d grabbed the wrong size welly, she  immediately flipped out and began frantically apologizing when she’d have been better served by just sucking it up and retrieving the correct boot before any more time went by.

Making it all about you also encompasses things like course design, task difficulty, and U-Turning. Nobody is out to get you on this show. And the other teams are under no obligation to take your game under consideration when they’re developing strategy that’s supposed to help them win. Task judges aren’t specifically being mean to anybody either. They’re just doing their jobs.

Evade responsibility. What was your stated reason for doing poorly on a task? Was it because you, personally, were not good at it, or was it because you’re female, or old, or your partner sucked at it, or the sun was in your eyes? Own it and move on, and it probably won’t be a huge deal with viewers over time. Rationalize it and try to deflect blame, and the longer you dwell on it, the worse you look.

It’s definitely not good to internalize everything either, but anyone who cries unfair, even if it’s warranted, comes off as a bit of a whiner.

Be helpless. There’s no harm in occasionally teaming up on a task when it makes sense. I don’t even think there’s any harm in making a U-Turn pact with some of your fellow teams. But you have to pull your weight when it counts, or there’s no reason anybody should root for you. I don’t doubt that they’re getting a little extra shade thrown at them for this on the basis of being women, but Jen and Caroline would definitely have many more fans if they hadn’t immediately leapt to getting help from whatever all-male team happened to be handy on at least three separate occasions. And how many times did we see a Roadblock described that any 60-year-old man in any kind of physical shape should have had no problem with, only to have Dave insist that Connor had to take it?

Make the same mistakes over and over. You can make big errors, and that in and of itself isn’t going to make a previously likable team unlikable. It’s totally fine, if you learn from it and move forward. “Screw up big” isn’t nearly as big a sin as “screw up the same way more than once.” Read the clue, Brenchel! Keep your eyes on your own work, Jen and Caroline! Stop helping, Afghanimals! Stop playing the age card, Dave!

Teams who want to learn from their experience are much easier to root for. Teams who think they already know it all, and aren’t open to change? Not so much.

Be mean. Go ahead: stir the pot, get into arguments, make snarky personal digs at your fellow racers. See how many fans you have once your words and actions hit national TV. Some racers end up being mean in a funny way, but this is extremely difficult to pull off, and even if you do manage it, half the audience will probably hate you anyway. (Marie is a prime example of this.) Rachel will sling it back if it’s dished out at her, but she’s mostly reactive. The other two teams were on the offensive very early on, and it certainly didn’t win them a lot of fans…well, except maybe the people who really, really hate Brenchel.

So with all that in mind, I am prepared to keep an open mind about the finale. Nobody’s a total saint going into the final three, but I can’t really say I’m rooting against anyone in particular either. A lot can happen to make us love or hate ANY of these teams in the one hour that remains of season 24. I can’t even say with authority that any of these wins will disappoint me. Done the right way, I could love – or hate – a win from any of these teams.